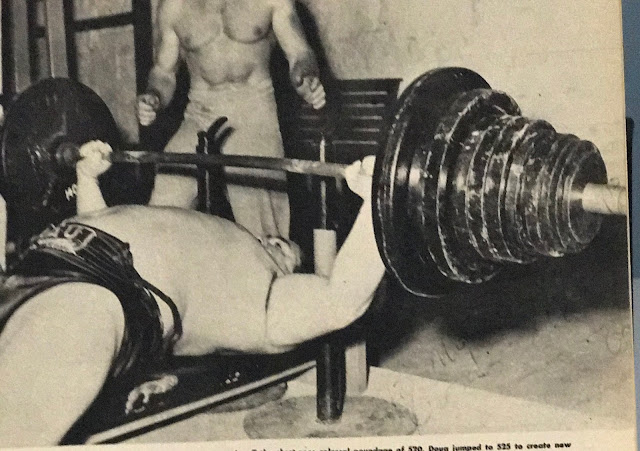 Note: Here's one of the few articles published that links Charles A. Smith to Hepburn as his trainer and coach.

When you coldly mention 500 pounds, even to the man totally uninterested in weightlifting, you give him no idea of the "feel" of such a colossal weight. I'm not what you'd call a weak man, but tto me the poundage Doug Hepburn is capable of using for REPETITIONS in the bench press is something that roots me to the ground as securely as if I was a 200 year old tree.

In half squats for instance, 500 pounds finds me well aware I've taken a workout. A full squat is impossible, a dead lift difficult, a bench press with 500 something I can only dream about.

Imagine then the amazing strength of the man who was the first to bench press 500, and then smash the record to smithereens five months later with 25 pounds more, and still show no sign of having reached his limit.

How does he do it?
How did he train for it?

In the early part of 1953, the question asked Doug most frequently was, "Do you ever expect to make a 500 pound prone?" Now to every weight trainer, 500 pounds is a mythical figure, and until Doug came along, to even suggest that it would one day be accomplished would be asking for a torrent of scorn and sarcasm to descend upon one's head.

It is interesting to note that only three short years ago, a 400 pound bench press was sufficient to elevate you into the ranks of the weightlifting immortals. Around late 1950, the record stood at 408 pounds and was held by Johnny McWilliams. There were a few men who claimed to have exceeded 380, and one, Marvin Eder, was treading closely on the heels of McWilliams.

But since Doug Hepburn began to train on the bench press, not only has he pushed the lift to unprecedented heights, but his feats have also encouraged others to train on it, and have been responsible for the development of a situation in which a bench press of 400 pounds is considered nothing remarkable. At present, there are at least two men who are capable of 450, and one who can exceed that figure, Marvin Eder, who has made 480 at a few pounds over 200 bodyweight.

Let's examine the reasons why Doug Hepburn has used the bench press so extensively. Doug first began to take an interest in the "King of Lifts" around the same period McWilliams was busy breaking the record. At that time Doug could standing press around 330 pounds, but was anxious to improve this figure. Practice of the bench press brought his standing press up to 360. Thinking he could increase this further with more Olympic press practice, he eliminated the bench press from his routines against my advice, for a period of six months. The result was that he lost power in the anterior deltoids, pectorals (and these, despite what others say, play a large part in overhead lifting), and triceps. Analysis of his training, plus constant prodding from me, made him realize why he was unable to advance beyond a 360 standing press. It was obvious that his previous bench pressing had done much to pack his Olympic press with Basic Power.

From this time on, Doug has used bench presses in his training, advancing his pressing ability to a degree that surpasses anything he previously possessed, despite the fact that he performed only occasional limit attempts at the standing press. As his bench press increased so did his standing press rise. Just before he performed a 500 bench press, he was capable of 5 repetitions standing press with 365, 380 for 2 reps, and 400 for a single. At the Mr. Eastern America show, he pressed 410 from the shoulders, 460 bench press from the chest, and 175 pounds done in a one arm military.

Since that time his pressing power, both in the standing and bench press, has increased by leaps and bounds. Not only has he smashed the world Olympic press record with a lift of 372 pounds, but he has pressed 385 pounds 3 reps after the weight was lifted to his shoulders, and has also pressed 425 for one rep after taking the weight off squat racks . . . STANDING PRESSED 425! On occasions, Doug has added as much as 20 pounds in one week to his bench press limit.

As Doug's trainer and coach, the man responsible for planning his training programs, I felt that once he could make 8 reps with 400 pounds in the bench press, he would be able to perform a single rep with 500. With this in mind, Doug began to head towards this amount of reps and poundage. Within three months, his gains were so rapid that he could bench press 400 pounds 7 reps, and had increased his record to 490 (his previous record being 465). He was at last within grasp of that fabulous "500." The day came on May 28th, 1953 in Vancouver, British Columbia. Before ten witnesses, including Roy Hilligenn and Nick Krushinsky, Doug at last bench pressed 500 pounds in impeccable form. The poundage was well within his power and the Canadian Hercules realized that he had not even approached his potential power in the lift. How right he was was proven some time in October of 1953 when he finally zoomed to a colossal 525 bench press.

How does Doug execute the lift and how does he train to reach such amazing figures? How is he able to so constantly increase his incredible pressing power? These are questions that intrigue all classes and types of weight trainers.

First, both Doug and I agree that proper apparatus is necessary. The bench must not be too wide or too narrow. Too wide and you are unable to put the full power of the arms and shoulders into the lift. Too narrow and your balance is affected. A bench should be just wide enough and not too high. 15 inches is high enough.

At all times, the lifter must handle the weight himself, using a pair of low squat racks, just as Doug does, adjusting the racks to the proper height, so that when they are placed at one end of the bench, the end where the lifter places his head, he can take off the loaded bar and press right away. Doug never worries about getting stuck with the weight across his chest. I have taught him to lift without collars, so that all he has to do if he cannot get the weight off his chest is to tip the bar to one side and slide the plates off, then let the plates off the other end of the bar. Doug has handled weights in excess of 570 pounds in this manner.

The shoulders should be well under the bar when you take it off the racks. Otherwise you expend valuable energy getting the bar into pressing position.

The legs should also be extended, since this will guard against unconscious body arch, a cause for disqualification.

Hand spacing is important too. For record purposes, a collar to collar grip is not advisable. Doug uses a hand spacing in which his elbows are perpendicular to the floor, enabling him to make full and coordinated use of the triceps, deltoids, and chest muscles.

Here is the present bench press schedule followed by Doug, the one he used to increase his lift to 525 pounds.

Doug works out two or three times a week, according to how he feels. He always performs 5-8 sets of a minimum of 5 repetition to a maximum of 8 repetitions. I have been careful to make Doug see the folly of training when he wasn't in the mood for a workout. In handling extremely heavy weights, it is always best to "make haste slowly" as the old saying goes. Pushing yourself when you are tired, or when you are mentally disinclined, will quickly lead to a period of staleness.

Perhaps I can make myself a little clearer on this point. Plane designers when they were striving to produce a plane to break the sound barrier found the ordinary rules of aerodynamics didn't apply. Let's take 400 pounds as the Mach 1 of weightlifting. You just can't hurl yourself against such a weight, you can't FORCE yourself with such a poundage, because it is so heavy, so immense, that energy reserves are depleted and fatigue products build up more quickly. A TIRED MUSCLE IS MORE SUSCEPTIBLE TO INJURIES!

So, I have always had Doug take his time. The result has been that Doug has been able to make steady, continued progress.

Doug takes three poundage jumps (warmup sets) to reach his training weight. The reason for this is that he believes in thoroughly warming up. First a warmup weight, 320 pounds 8 reps is used, then 350 8 reps, next 380 8 reps. Then he drops down to 330 performing 6 reps, then 360 for 6 reps, and finally 400 6 reps. In the last poundage, he goes all out to get 6 reps in:

It is Doug's opinion, and one shared thoroughly by me, that there is no lift to equal the bench press for building all types of pressing power and building the upper body.

Who knows? Perhaps this giant of power, the man who has paved the way for others to follow, inspired and thrilled by his feats, might easily go beyond this.

To Doug Hepburn, all things in the World of Weights are possible.