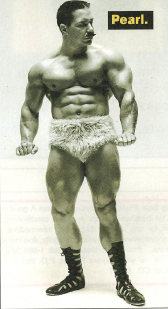 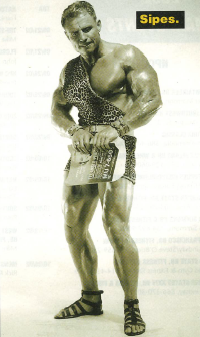 What makes someone want to ruin a perfectly good 70-penny steel spike by bending it with his hands alone until the ends touch?

"I wanted to do something I knew 99.9 percent of the people onstage or in the audience couldn't match," Bill Pearl explained. "I wanted them to have to meet my challenge."

But how, exactly, do you destroy the spike?

"Anyone with any grip strength could probably bend a 60-penny spike," he said, "but the 70-penny, 10 inches of 3/8" thick steel, requires intense mental effort as well as strength.

"I used to hypnotize people when I was younger, and I'd almost hypnotize myself to perform this and other feats of strength."

Pearl blazed onto the bodybuilding scene in 1953

with three dazzling victories within six months of each other: the AAU California, the AAU America and the NABBA Universe (the first of five wins), all of which he won on the first try.

As he continued the (arguably) longest reign in bodybuilding history, he packed on more mass than others guys thought possible. He did the the hard way too: lifting heavy, hard and often.

He even won the NABBA Universe in '67 and '71 - at the age of 41 and as a lacto-ovo vegetarian, beating all the top carnivores save Arnold, who declined to compete.

Pearl was one of the first bodybuilders to bench 400 and squat 600, but being the biggest and best wasn't enough. He wanted something to set him apart from the pack.

He put together an act and made himself a headliner for contest and exhibitions around the country. Despite his accomplishments in the strength arena, he chose his feats carefully. "When you've been on the road for a couple of weeks, you don't want to miss a 400-lb. bench in front of a hungry audience because you're tired and distracted," he said.

So Bill looked to the strongmen of a previous era and worked up an act of sure crowd pleasers that he knew he could accomplish at any time under normal circumstances. That doesn't mean they were easy or free from danger. Each feat took extensive preparation. 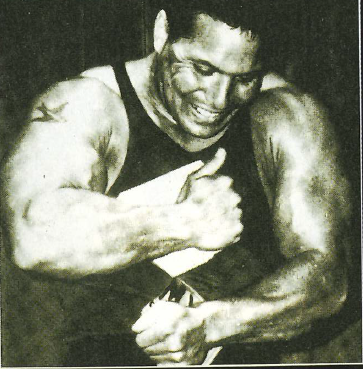 How do you train for ripping license plates in half? By doingt it over and over and over. Nothing was left to chance. Bill kept a five gallon bucket of 70-penny spikes by his desk at the gym he operated in Sacramento, California, and bent three or four a day, tossing them into a bucket for the members to take as souvenirs.

To bend a 70-penny spike, you take the sharp end and wrap it in a towel or cloth. Holding the sharp end in one hand, like you're doing a chin-up with your palms facing in, you grab the other end and push in until your knuckles touch. Once you get it into a V, you lace your fingers like a kid doing "Here's the church, here's the steeple," and crunch until the ends touch. It sounds pretty straightforward, until you try it.

In his act Bill tossed the bent spike into the audience and offered a grand to anyone who could straighten it. He knew that was even harder, so his money was safe. And he got paid good money for this act.

If someone was paying less than $500, he'd do a few poses and sign autographs. The strongman stuff was reserved for promoters paying as much as $5,000 for Pearl's appearance. That was a lot of dough back in the '50s and '60s! When he was offered serious money, Bill knew the contest or exhibition would be well publicized and draw a big crowd. He felt that he had to earn the money by putting on the best show he could. He'd do a posing routine, various strength feats and then some old-style posing, like Sandow used to do.

Bill supplemented his regular workout with hand grippers and wrist curls to build grip and forearm strength. He got so strong he could wrist curl 185 pounds for reps. 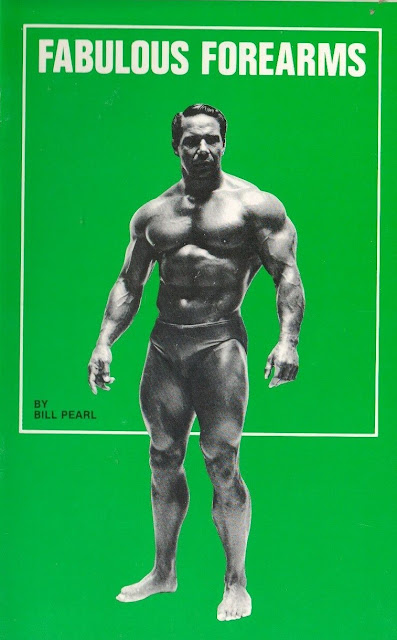 Bill Pearl's booklet on forearm training.
It was also reproduced in an issue of
Dan Lurie's Muscle Training Illustrated.

Once, in Louisville, at the end of a two week tour, however, his attention faded for a split second and the spike twisted away from him and plunged straight through the palm of his hand. "I held it up with blood running down my arm, and the crowd thought it was part of the act," he recalled.
He got a standing ovation from the 1,500 present, and it took four guys to pull the spike out. When he got back to the dressing room, there was a knock on the door. Leo Stern, Bill's mentor, business partner and traveling companion opened it, and some yahoo was there, claiming to have traveled 500 miles to challenge Bill to a wrist wrestling match for $1,000. Leo handily got rid of him.

Leo was also the man who assisted Bill onstage and covered Bill's eyes when he exploded hot water bottles with pure lung power. 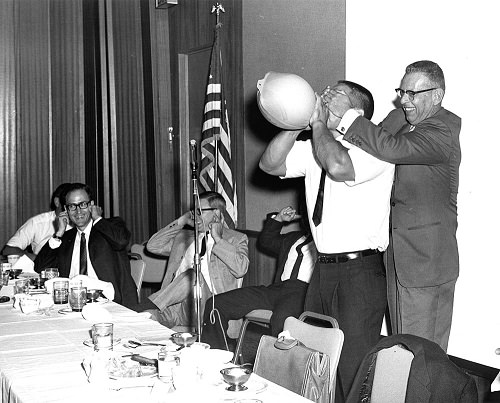 "When they blow, the rubber can take the skin off your face, and I didn't want to get any in my eyes."

Most water bottles would pop after, say, 30 to 35 breaths (I'm gasping already), but the tough ones could take more than 50. By that time the rubber was so thin around the opening Bill couldn't get a good seal, and he'd have to stop and take a second stab. 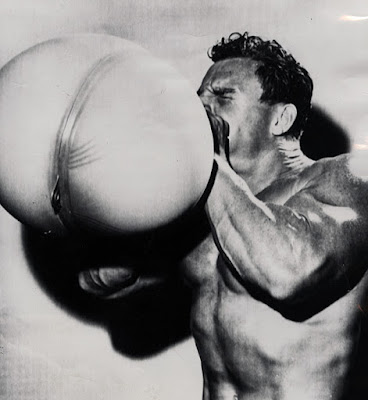 They always popped by the second try. Incidentally, on his 70th birthday Bill blew one up until it burst before a group of people, just for old times' sake!

The water bottles were the easiest of the feats, but the others all required will power as well as muscle. He'd tear two licence plates in half, assuming they were front and back plates with the same number. It had to be straight metal, though. Any crimp, and he couldn't do it. He'd twist with one hand and pull with the other, so there was a risk that he might cut his hands on the sheared metal. He'd joke with the audience not to try it at home. It's about 10 times tougher than ripping phone books in half, he said, which is really just getting the knack of tearing a page at a time. It's a good show, but anyone can do it.

Bending horseshoes isn't so easy. In fact, even Bill couldn't bend new horseshoes. He'd get used ones and judge from the state of the metal whether he could twist them into an S-shape. Onstage he'd place one against his thigh and hold it there, then twist with his other hand. The shoe would obediently writhe from a U to an S. They made a big noise dropping to the stage and rattling against the mike stand. "It was fun to play with them," he recalled. That's true mastery - doing it with a smile.

Bill also broke chains, almost the size of tire chains. He'd get an eight- or 10-inch length, grab the ends and snap it so hard that a link would break. It wasn't always in the middle or on the first snap, but those chains wouldn't survive more than three or four snaps from Bill. Something had to give, and it was never his strength.

None of his feats were stunts or tricks. And none of them came naturally to him, not like football and wrestling, the sports he lifted for in high school. He had to work at perfecting every one of his feats of strength.

Bill's professionalism ensured that he never attempted something he couldn't finish onstage - and he was never out of shape. 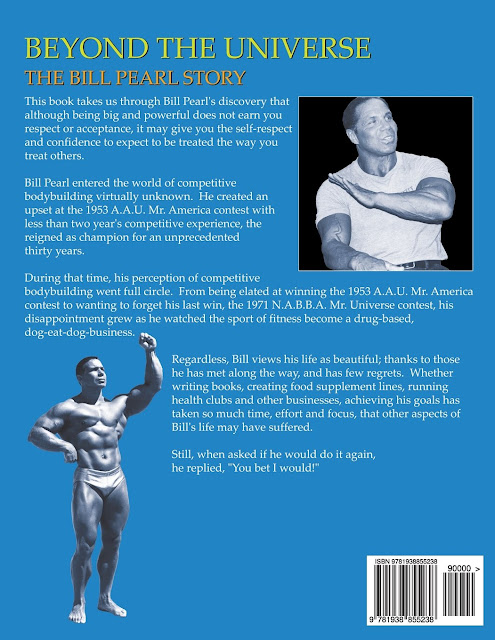 Chuck Sipes caught Bill's act at the Sacramento County Fair one year, and was inspired to do his own. Chuck distinguished himself from Bill by doing different feats, like driving 60-penny spikes through lumber with his bare hands and bending rebar. 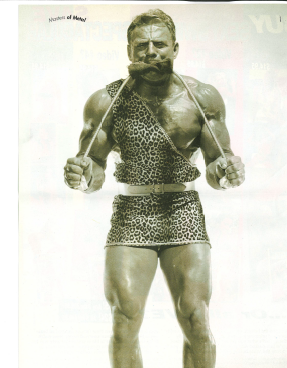 In spectacular fashion, he'd sometimes start the bend not in his mouth, around his neck, or over his head, but in a manner suggestive of the famed Thomas Topham: He would hold one arm out straight and then slam the bar against it. The bar would bend around his forearm, and then he'd continue bending by crushing it in his hands.

Bill once measured Chuck's incredibly strong forearms at 17-1/4 inches at a bodweight of 198 pounds.

Bill and Chuck both had great rapport with the audience, and the fans loved their acts. Nobody had done those feats in a number of years when they started. Today few people do them (article Oct. 2002), and those who do usually don't have the sculpted muscle of a Pearl of a Sipes. The strongman circuit has become a different thing, for different guys and requiring different kinds of strength. Of course, bodybuilding has changed as well. "Men and women don't have to work as hard as we did," Bill said emphatically.

The image of easy muscle and easy strength fuels every adolescent comic book fantasy. For me - and I suspect a few others - the singular icon of strength is a similar illusion: Steve Reeves hands on either end of a length of steel , bending it into a new shape without so much as a grimace.

The iconic image of Reeves, bending that rubber prop with his hands alone, gave way to men like Bill Pearl and Chuck Sipes, who really did it. They bent, broke and twisted real steel with their bare hands, and they worked long and hard to be able to do it. That's the kind of inspiration that puts your back on the bench and the sweat on your brow, so you, too, can make your fantasies come true.