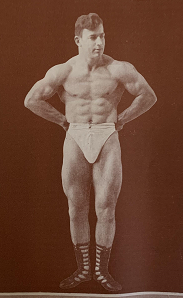 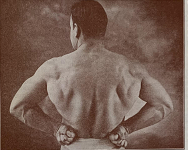 The Good Barbell and Dumbbell System is here:
http://ditillo2.blogspot.com/2016/04/the-good-barbell-system-courses-one-and.html
http://ditillo2.blogspot.com/2016/03/the-good-barbell-system-of-training.html
http://ditillo2.blogspot.com/2016/06/the-good-dumbbell-system-of-training.html
Do you remember the story in history, "A nail was lost, a shoe was lost, a horse was lost, a battle was lost, a war was lost.'
The failure of a messenger to arrive caused by the laming of his horse, after losing a shoe caused the loss of an entire war.
An occurrence just as trivial indirectly resulted in a series of events which led to Bill Good winning national weight lifting championships year after year and definitely proving himself to be America's strongest man year after year.
More than twelve years ago Harry Good was visiting the city of Lancaster, Pa., a few miles from his home in Reamstown. Passing a news stand he stopped to examine the magazines displayed there. For the first time he saw the magazine "Muscle Builder" which had not been in print since 1925. 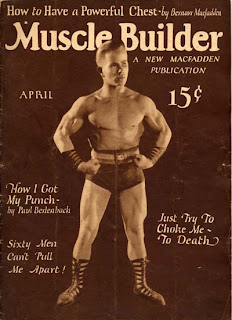 He was thrilled with the stories of strong men and the pictures of their powerful physiques which filled the pages.
He read the magazine through entirely several times and became to interested that he too decided he would be like the man he was reading of. Close observation showed Harry that all these men had included training with weights in their years of body building which had made them world famous for their strength and shapely physiques. So Harry started to follow in their footsteps by purchasing a bar bell set.
At first he followed the course that accompanied this bell. He was not satisfied with his progress. Being of an observing and analytical mind, studious and very enthusiastic, he talked to everyone, read all the books and magazines he could procure, and learned the methods that other strong men had really used in developing their bodies. He found that they did not follow just a few standard bar bell exercises, but practiced a multitude of exercises.
Without exception all of these men in addition to heavy bar bell work, performed a host of exercises with dumbbells, for dumbbells build the muscles from many different angles, making them shapely and strong. He observed that practically all of these men included some apparatus work in their training. During much of the year it was not possible for him to do tumbling, hand balancing or apparatus work, as he trained in a small shed built in his back yard.
So he devised exercises which would duplicate the movements of hand balancing, etc., built these into his training program. Thus, this many years ago he was using the basic principles now followed in the training of the York team. A wide variety of exercises with bar ball and dumbbell, weight lifting exercises included, moderate training part of the week and a limit day about once a week.
With this new system Harry advanced rapidly, winning the national amateur championship in 1928. He build up quite a reputation for himself as a strength performer as he practiced considerable heavy work, back lifting, teeth lifting, finger lifting, hip belt and harness lifting.
During all this period, Bill, his youngest brother was interested only in boys' games. He had noticed the great change in his brother Harry's build in the first few months of training. (After a year of training Harry had build a wonderful physique. Since that time he has not gained any weight, has increased in shapeliness, muscle definition and is several times as strong.) He was casually interested in seeing the weights Harry lifter, in seeing Harry's picture in leading magazines devoted to strength subjects.
The first of March 1928 was an important day in the life of Bill Good. Important too to many millions of others, for what he started that day has already served as an inspiration, directly or indirectly to thousands of people. Had a tremendous bearing in encouraging these countless men and women of all ages to go and do likewise. Improve their bodies, build their strength and enjoy super health.
This first day of March Bill went back and trained with Harry. Walter too started at this time, both placing themselves under the watchful eye of their powerful and famous elder brother. 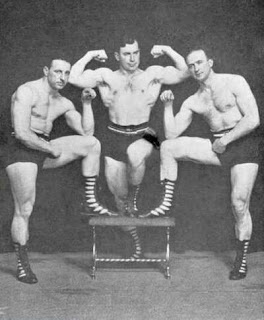