Note: Below is a link to a separate Bulk Routine from Alan Stephan. The set-rep setup is a little different from the usual approach. If you follow any of the three layouts to the letter and use honest, no-slack poundages, after each workout you might feel like a truck ran you over, reversed, and did it again. It's not for everyone:
https://ditillo2.blogspot.com/2014/12/an-alan-stephan-bulk-course.html
How to gain weight . . .
This is the same question that has come up before me many times since I have entered the gym business. We all know that the only true way to gain weight that isn't around the middle, is to use weights. What goes on in the body when one does train for more and larger muscles is the muscle cells are torn down during the workout, and are replaced with new cells when you sleep and rest. Plus some extra cells which nature gives you so that you may do better and easier what you are trying to do.
Now, you can tear down too many cells so that you won't be able to replace all of them and be left with less than before, or you may not tear down enough.
[Hence, the "It's not for everyone" bit in the earlier Stephan article referenced.]
So it is very important to how many sets and repetitions you do of each exercise. I find that n all upper body exercises 10 reps in each exercise is the best rule to follow and that 5 sets is usually plenty, generally, and that in the lower body exercises 10 reps is generally the best number, with about 4 sets.
Now, there are things that you can take internally that will help you a great deal. [Here he goes into some early late 30's, early 40's era diet supplementation with cod liver oil and geltin that I'll skip].
In the following paragraphs I am going to enumerate what I have found to be the best exercises I know for gaining muscular weight. You will notice that they involve the larger muscles mainly which contain most of the weight of the body.
EXERCISE NO. 1 - DUMBBELL PULL UP AND PRESS 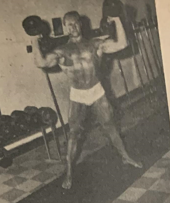 The dumbbell pull up and press, I believe, involves almost every muscle in the body but mainly gives the larger muscles the most work. These being the thighs, lower back, shoulder, biceps, and triceps.
Take two dumbbells about 20 pounds lighter than you would normally use in the dumbbell presses together. I ordinarily use 100 pound dumbbells, but for this exercise have been using 80's. Have the dumbbells on either side of you. Pull them to the shoulders and them press them overhead. Make sure that you fully extend the arms and don't lean back farther than a few inches. If you do you need a lighter weight. From this position bring the dumbbells back to the shoulders and then let them down to to the floor again, and repeat for 10 reps.
EXERCISE NO. 2 - HALF SQUAT

Lifters were much blurrier during that era.
This exercise is a great weight gaining exercise and strength giver. You can use much more weight in it than the full squat. In the full squat I use 400 pounds, but in the half squat I handle 600. Don't be afraid to really pile on the weight and give it a good try. A rolled up towel on the bar usually makes it comfortable enough so you can concentrate on the exercise. After getting the weight on the bar take a deep breath, bend the legs until they make a near right angle with the calf and thigh but do not go below this point for you will not be able to handle near the weight you should. Take a deep breath between each squat and do 20 reps for about 4 sets.
The muscles worked by the half squat are mainly the thigh muscles but the calf, bicep muscles of the back of the thigh and the lower back are also used a great deal. A better rib box developer would be hard to find.
EXERCISE NO. 3 - HEAVY LEG PRESS

The leg press is a grand exercise for developing the muscles of the thigh, but when used as an inverted half squat it acts in the same way as a good all around developer and at the same time is more comfortable so more reps can be managed. get under the weight as shown in the photo. Also, in this exercise don't let the weight any farther down than 8 or 10 inches making more than a 90 degree angle with the calf and thigh. I ordinarily use 720 pounds in the leg press but in the heavy leg press I can now use 1,000 pounds. Make sure that your legs are directly underneath the weight. This gives a more sturdy support and you can take your breaths more easily in this position when the legs are locked at the knees and the bone structure supports the weight.
EXERCISE NO. 4 - PRONE PRESS WITH REVERSE GRIP AND ARCH

This exercise can be used as a very good weight gainer in so much as that a fellow can get to use a very heavy weight so that the upper body muscles have to handle more than they are accustomed to.
The muscles involved in this exercise are mainly the pectorals (especially if you have a wide grip), triceps and shoulders (particularly the front deltoid. There is a much deeper contraction of the triceps when the grip is reversed.
An easy way to get in position for this exercise is to slip under the barbell so that it is just over your lower abdominals. Get your grip on the bar (a little wider than for the ordinary prone press although it is good to change it regularly), with your palms toward you and thumbs around the bar. Now place the feet as shown and push with the abdominals and hoist the bar right in position overhead.
Be sure to have the wrist lag down so there is no chance for the bar to slip out of your grasp. Let the elbows come down and touch the mat and maintain the arch in the back throughout the whole exercise. I usually handle 300 pounds for 10 reps in this exercise. I think 4 or 5 sets in this exercise is sufficient.
EXERCISE NO. 5 - THE DEAD LIFT

Do the dead lift?
The dead lift can be done with bent or straight legs. I prefer the straight legs because the weight is then used to know how strong your lower back is and not how strong your legs are. It is usually pretty hard to continue gripping a weight so that your legs give out before your hands do. The thighs usually get enough exercise in the squat and leg press but the lower back is usually neglected, so this is why I prefer the stiff legged dead lift as a weight gaining exercise. I have worked up to 400 pounds, 10 reps in this exercise.
It also acts on the latissimus dorsi muscles a great deal. But if you want a deep groove in your back instead of the backbone protruding out past the rest of your back then be sure to include this exercise. It takes constant practice to really work up in weight in this exercise so be sure to include it near the end of your every workout.
Get an alternate grip on the bar so it won't have a tendency to roll out, about shoulder width apart and have the feet about the same distance as shown and then keeping the knees bent a little as you bring the bar up the first time, because this will not put such a pull on the knees. Then straighten out the knees as you go down and continue for 10 reps. 3 or 4 sets is enough to do. Fellows have a tendency to develop a kink in the back from this exercise so go up in weight gradually.
EXERCISE NO. 6 -  PULL DOWN BEHIND NECK

Now here is an exercise I consider terrific for developing the entire upper back. It mainly develops the latissimus dorsi but the teres major an minor and also the rhomboid muscles receive their share.
Get as wide a grip as is comfortable for you then drop down to the squat position on toes and stay there for the 10 reps. Pull the bar down until it touches the neck then let it up rather slowly until the arms are extended fully. It is also good to pull the bar under the chin for about 3 or 4 of the 10 reps. Use the thumb-around grip as shown. [Alan tires, and his perceived image fades at session's end.] When the arms are completely up, it is best to contract the latissimus at different angles relaxing and flexing them; this helps to get them fully worked out. Also it is fine for definition in this area to hold a bar, post, or something that you can pull and tug on and stretch and contract the lats from all angles.
This could be seen by some as a "break in" routine before going to the first of those three tough layouts by the same author, linked at the top intro. Then, back to this one, or something very similar . . . on the the second layout in the article linked above . . . then . . .
Enjoy Your Lifting!