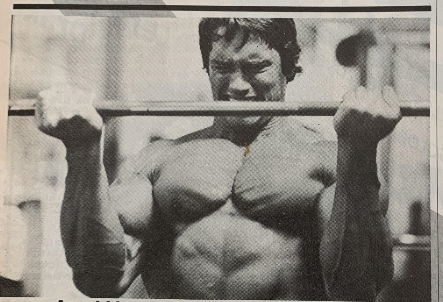 Nice Middle Finger Illusion on the Right
There's something very alluring about big, strong muscular arms. Everybody wants them. Probably more bodybuilders initially became inspired to take up bodybuilding by a picture of some superstar's huge, monstrous arms than any other bodypart.
In my case I was just 14 years old. I was down at the local variety store buying some coke and potato chips or other such junk and I started leafing through a magazine. Suddenly I came across a closeup photo of the biggest, most muscular arm I'd ever seen!
At first I didn't actually believe it was real -- it had to be trick photography or made of rubber. Man, it was really something else. I just kept staring at it with a growing sense of awe and excitement. 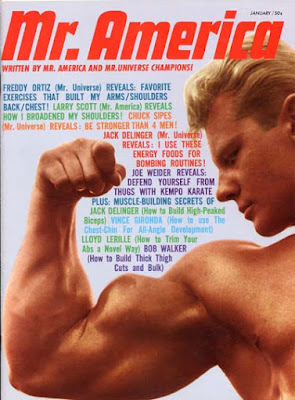 At the time I didn't know anything about bodybuilding or biceps, triceps and forearms but this arm was truly mindboggling. Attached to the arm was a blond-haired giant I would later learn was superstar Dave Draper. To me he looked like a Greek God and even today Dave is one of my all time favorites and a source of inspiration.
That very day I went home and asked my father about getting some weights, and a few months later (on Christmas morning) I received a 110-lb set and I was on my way.
I suppose a similar story could be told by literally thousands of bodybuilders around the world. And now, almost 17 years later I've had more than my share of ups and downs an disappointments with my training but I've had aa lot of fun and learned a lot along the way. I'm still as enthusiastic about bodybuilding now as I was when I saw that first picture of Dave Draper. Maybe I'm not so naïve as that youngster was who thought 20" arms were only a few protein drinks and arm workouts away, but I'm still trying to improve.
Actually, arms are not one of my favorite bodyparts to train, but I'd be lying if I told you I never imagined having an 18 or 19 inch monster hanging out of my shirt sleeve. But this article is on arm training -- some of the problems often encountered training arms and offering a few possible solutions, and ends up with some very successful arm training programs.
Before we get into talking about some of the problems and solutions of training arms, let's talk about what constitutes a "great" arm. Most authorities would agree that the characteristics or qualities of prize-winning arms are good size, shape, separation and balance, with definition, vascularity and cuts. That's a tall order to fill and can only be achieved through hard, persistent, intelligent training, using a balanced routine to train the complete arm.
To achieve such arms, the biceps should be trained for overall size, thickness, peak and length with a pronounced cephalic vein running down the middle of the arm. Think of that huge vein on Arnold's biceps and you'll know what I'm talking about . . . Another great article as always. I wanted to share with you my personal experience regarding barbell curls. When I was in high school I could cheat curl 100 lbs. with moderate body heave and layback. I stopped doing curls of any kind for a 5-year period whereupon I focused on getting my back stronger thru weighted pullups, double overhand deadlifts and one arm deadlifts without hook gripping the bar, and farmers walks. After my lengthy hiatus from curls I resumed barbell curls and ez bar curls. To my surprise I could very easily strict curl 100 lbs. and with great effort I could strict curl 135 lbs. All without ever curling for 5 years. The increased back and grip strength boosted my curling ability by leaps and bounds. Interestingly enough, John Grimek wrote about his same experience regarding curls. He mostly focused on high pulls, power cleans, rowing, pull ups and deadlifts. He said he maintained his biceps size while doing very little curling and that he disliked curling due to an injury which made curling painful for him.

Hey Jeff! THANKS BIG for the comment and your personal experience. The compound moves are mighty! I get golfer's elbow pretty easy now when I overdo the bi, tri and forearm isolation movements. Two weeks in and Yee Ouch there it is. It originally came from overdoing weighted chins for a while years ago. Honestly, and I'm betting a lot of us here did this, I am surprised our bodies survived some of our mind's plans with this thing!

For my money lately, the best thing I've found as far as wear and tear goes is cycling a large number of different exercises for the same bodyparts, and cycling reps from the high end all the way down to singles. Variety is a great spice that seems to have healing qualities to boot!

Just in the process of wrapping up the second half of this article . . . should be up tonight.
Have a good One!