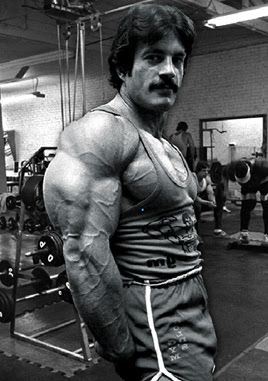 Mike Mentzer was the first bodybuilder in history to garner a perfect score in a major bodybuilding competition. His entire physique is magnificent, but his triceps are beyond what even the best of the field can equal. Here he talks about how he built them. 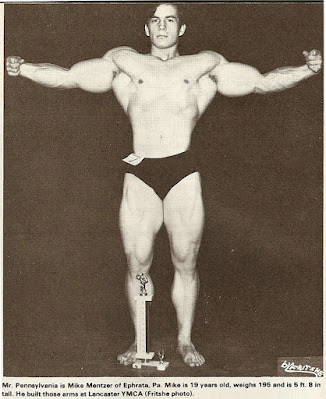 Here is something one doesn't see everyday...the fundamental, foundational training of a big time bodybuilder...before he became a magazine & dais god. The pre-HIT, pre-Jones interpretation of "Heavy Duty"--strength training on the power and Olympic lifts, with a little ancillary muscle building blended in. It's as old as the hills, but the conventional still works.

Hello Jan! IronMan ran some articles that featured the history of certain "champeens" training background that I had forgotten about. I was shoving a pile of books back into one of the closets here at Everything's in Anal Order Blog Headquarters, when "Ironman's Ultimate Bodybuilding Encyclopedia" kept falling out. A compilation of past mag articles organized in a real nice fashion. Maybe there'll be more in there along this line . . . I hope so. It's a good idea, this Encyclopedia-sort of format, both in terms of wringing a little more out of already owned articles doing "double duty" for the company, and in terms of me seeing some stuff I missed when digging through the original mags.

I am a fan of old-as-the-hills stuff that works like a charm, personally. It seems easier to keep dinner down if I stay in that era when organizing my training. I mean, some of these types on their Tube-toilets really put out a reek.

Mentzer built his body the conventional way. High volume and frequency. 4 sets for triceps maybe good for an absolute beginner but not for a seasoned trainer. Mentzer did talk a load of old nonsense. Btw, the first bodybuilder to get a perfect score ever was carlos rodriguize. Not Mike Mentzer.

OSB, yes, to a point Mike did build his initial mass via volume. BUT then he stalled, despite adding more and more volume. Then he met Casey, and Arthur, and changed it all. As for 4 sets is "good for an absolute beginner" ... I was one of Mike's clients. (Mine was the last email he ever read while alive) Having used Heavy Duty since 1978, 4 sets would be over-training for me!

The bigger and stronger you get you need LESS, not more. At 260#, 1-2 sets per muscle is my lot ... as it is all I help train. And I have trained 100's over the years. Mike tested all his theories in the gym. No "nonsense" there! He trained upwards of 2,000 clients, so Mike had a good idea what works for the average trainee.