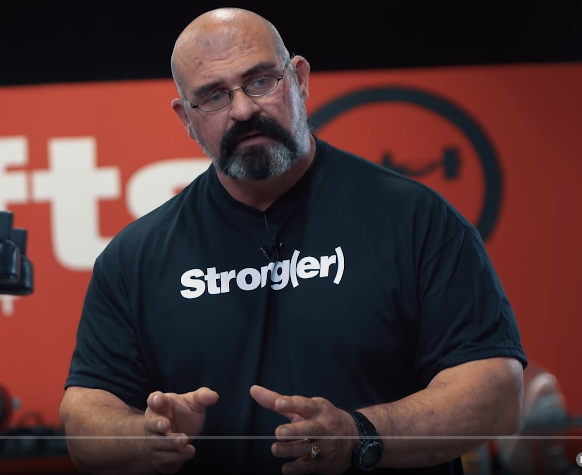 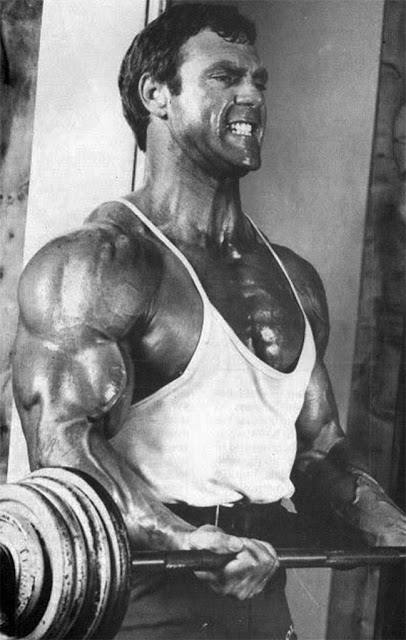 Almost from the first week I touched a weight, I've had proportionately large deltoids. But big isn't better, especially if the anterior (front) delts are huge, the medial (side) head smaller, and the posterior (rear) head flat and unimpressive. This unbalanced development is the problem I've had to overcome in the past few years.

The higher you go up the ladder of development, the more perfectly balanced your physique has to be in order to create the desired appearance. Each individual muscle group must be fully developed from origin point to insertion point.

Most bodybuilders have several years of hard, direct delt training experience from doing such chest exercises as bench presses, inclines, and dips. So when they discover that their side and rear deltoid heads are two or three years ahead on front delts in comparison to the side and rear sections.
To correct this problem, you have to give priority to the medial and posterior heads. You should do the weakest area first in your routine and give it more total training intensity than other sections. Of course, this is very specialized muscle priority training, not for those with little lifting experience yet.
To isolate stress on the side head, your upper-arm bone rotates both forward and downward as you do the movement. When doing side laterals with light dumbbells, rotate your index finger on each hand downward. This is especially effective if the front end of each dumbbell is an inch or so below the back end as you reach the top position of a repetition.
It's absolutely essential that you use perfect form because without it you cannot pinpoint stress on the particular head of your deltoid you are trying to attack and bring up. When you concentrate on using ideal biomechanics, you will be forced to use relatively light dumbbells. 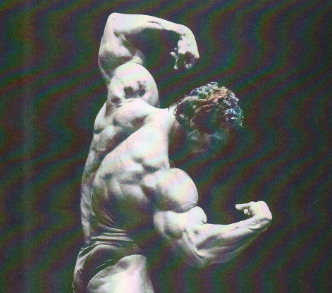 My delt muscles are very large and powerful, but I use such strict form in my dumbbell side laterals that I can use no more than 20 to 25 pound in each hand for a set of 10. Yet I see relatively inexperienced guys using twice that much by sacrificing form. They lean backward and have the front end of the dumbbell above the back edge, which isolates stress more on the front, rather than the side delts. And that in turn throws the deltoid development even further out of balance.
Until the lagging sections come up to par you can ignore the anterior delts for several months because you place direct stress on them in your chest workouts. I seldom do direct exercises for the anterior sections of my deltoids, movements such as seated or standing dumbbell presses, front raises, or behind the neck presses. I only do overhead pressing exercises once or twice a month and then only in pre-exhaust supersets.
Pre-exhaustion is a very productive technique when training shoulders. Usually, your deltoid muscles are larger and stronger than your triceps, so when you perform straight sets of any overhead pressing movement, your triceps will give out a few reps before the delts fail. As a result, you won't be able to stress your deltoids as intensely as they need.
Robert Kennedy's pre-exhaust article in IronMan . . .
http://ditillo2.blogspot.com/2012/04/original-pre-exhaust-article-robert.html
With pre-exhaustion, you can make the triceps briefly stronger than the shoulder muscles. This is accomplished by supersetting an isolation exercise (dumbbell side laterals) with a basic movement (overhead presses of some type). The isolation exercise pre-fatigues the deltoid complex making the triceps comparatively stronger than normal as long as you don't rest excessively between movements. Always set up your equipment for pre-exhaust supersets so you rest only long enough to drop one set of weights and pick up the next, only three or four seconds.
At peak intensity I do each set in five distinct ways . . .
First, I break the movement down into three parts, doing about six partial reps (five or six inches long) in the most difficult, or peak contracted, part of the movement. On dumbbell side laterals, this would be the top third of the movement, raising the dumbbells five or six inches up to a position with your upper arm bones slightly above parallel with the floor.
Without putting the weight down, I next do about six partial repetitions in the next easiest part of the exercise, the middle range.
Again without putting the weights down, I do approximately six more partial reps in the easiest, lower third of the movement.
Next I do three to five full range movements, with my training partner giving me both forced reps and negatives.
I finish with three to five static reps in which I hold in the middle range of the exercise for four to five seconds.
Obviously, this set is very painful, but it's quite effective in building muscle mass and quality. As long as you aren't injuring a joint or muscle, my motto is, "If it hurts, it works!" I always train for increased muscle mass rather than strictly quality because with added mass I can diet down for definition and still have plenty of size left.
I am currently alternating about one month of straight sets  work for my shoulders with one month of high intensity training. The high intensity workout consists of only four of the extended sets I've just described. The routine is usually two sets of seated dumbbell side laterals, followed by two sets of seated dumbbell bent laterals.
Since I used to overtrain, I'm very sensitive about keeping my total sets for each muscle group under strict control. My entire delt program during my straight sets cycle consists of 6 to 12 sets, depending on how energetic I feel and how quickly I get a decent pump.
This is a typical delt workout:
Seated or Standing DB Side Lateral, 3-4 x 8-12
Cable Bent Lateral, 3-4 x 8-12
Standing DB Press (optional), 1-2 x 6-10
Cable Upright Row (optional), 1-2 x 8-12
This is just an example since I constantly change my routines. When you use the same schedule day after day, you can almost completely adapt to it, which tends to slow your rate of growth.
If you decide to put some of my delt workout methods into your own shoulder training, I'd suggest only two sessions per week. That's all I do (occasionally even less), and I work them along with my back, traps and neck.
Every time you train deltoids, be very careful to maintain optimum biomechanics. This way you can isolate stress on a precise section of your delt complex, regardless of the fact that you probable won't be able to use very heavy weights in your isolation exercises. Isolation and intensity are keys to optimum shoulder development, so use them wisely.
Enjoy Your Lifting!