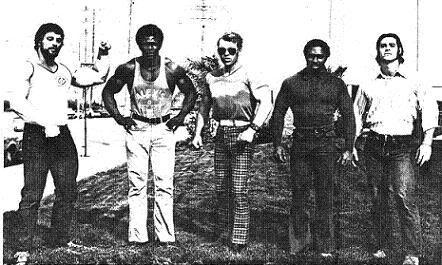 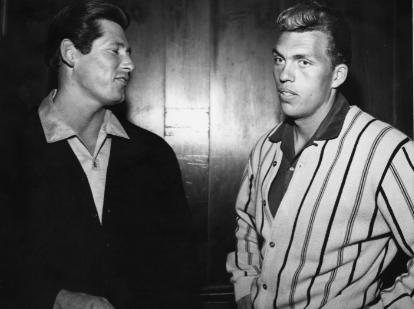 Don Howorth, Gene Mozee
One of the great unsung bodybuilders from the past, Dave Dupré is a unique individual who should be an inspiration and a role model for all serious bodybuilders. He's won more than 30 titles, including Mr. Western America, Mr. International, and Mr. Americana, and he was America's national Tall class bodybuilding champion in 1975. Dave has defeated such stars as Mike Mentzer, Dale Adrian and Steve Davis, and he once placed second to the great Sergio Oliva in international competition.
Impressive as his bodybuilding credentials are, Dupré was also an outstanding Olympic weightlifter - he clean & pressed 300 pounds while still competing in the 198 class. His powerlifting feats include a rock bottom 550-lb squat, a 440 bench and a 730 deadlift. He also excelled in odd lifts, like a 185-lb one arm snatch and a 150 one arm military press.
Although injuries led Dave to give up strength training in the mid-1960s and concentrate on bodybuilding, even today at 50 years of age, he handles prodigious poundages on most exercises. His training endurance is legendary.
"None of these modern champs can keep up with me in a workout," he says. "They don't have the stamina that guys like Jack LaLanne and John Grimek had. They have no endurance because they train one bodypart for an hour and then leave the gym. They come back and work another bodypart and maybe even come back for a third workout later.
"They have no job, so they do nothing but train."
Outspoken on the subject of anabolic drugs, Dupré firmly believes that they're ruining the whole thing. "Most of today's superstars are overweight for their height," he says. This spoils their symmetry, and eventually the quest to get bigger an heavier distorts their physiques to where they can't win anymore and they retire prematurely."
Dave is particularly adamant about the use of human growth hormone, which is so prevalent today. "HGH is used in conjunction with other potent anabolic drugs, and it causes serious problems," he explains. "The bones of the face widen, the elbow bones thicken, and the internal organs also expand, which makes the waist too gig. Then there's the injury factor. I can think of many of today's champs who have torn muscles and ligaments while using light weights or even just throwing a punch or moving furniture. These drugs shorten a bodybuilder's career by several years.
"The champs today just don't last long," he observes. "I've been competing for 30 years, and I'm still at it, which I attribute to not taking bodybuilding drugs."
Dupré definitely speaks his own mind. In fact, he's up front about everything. His many friends admire his total honesty, and when it comes to muscle building, he tells it like it is.
Dave believes that a bodybuilder who trains correctly can be stronger, faster and healthier and can perform better as an all-around athlete than people in other specialized sports. He prefers the athletic bodybuilder who can do more than just get a good pump. Of all the bodybuilders he's trained or competed with, he singled out Franco Columbu as a real athlete who had tremendous power and endurance.
Originally from Oakland, California, Dave Dupré started training after he saw Steve Reeves for the first time. He was about 12 years old, and his immediate reaction to the man who would be his bodybuilding idol was to say, "That's it. That's the way I want to look."
He began with the old George F. Jowett mail order course and eventually discovered barbells. The first time he walked into a bodybuilding gym, he was 16 years old. It was Jack Delinger's gym in Oakland, and Delinger measured Dave's arm, neck and calf at 16 inches.

"Jack Delinger had the first 20-inch arm I ever saw," Dave says." When I found out the he used to be Steve Reeves' training partner, I asked him endless questions about how Reeves trained. I learned to train fast, the way Reeves did, using strict exercise style and maintaining a tempo. Jack told me Steve often did supersets to save time and work a muscle harder from all angles. Naturally, I adopted that too."

As for Reeves, Dupré says, "His fabulous physique was built without drugs, and no one has ever had more aesthetic, symmetrically perfect development than Reeves."
The amazing thing is that Dave's physique almost duplicates Reeves' fabulous symmetry. At his peak Dupré's arm, neck and calves all measured 19 inches.
It's a treat to watch Dave work out. He trains hard and fast and uses heavy poundages when required. On incline dumbbell presses he's done 5 reps with the 150s, cleaning the weights himself and rocking them back into the pressing position. Even so, he never sacrifices correct form just to use more weight.
His favorite training program never varies. He trains two hours at a time, six days a week, selecting four exercises for each muscle group to work it from all angles.
Here's a typical workout.
Monday/Wednesday/Friday
Chest:
Barbell Bench Press, 4 x 8
Incline DB Press, 4  x 6-8
Flat Bench Flye, 4 x 6-8
Stiff Arm Pullover, 4 x 15
Calves:
Standing Calf, 6 x 8-12
Seated Calf, 6 x 8-12
Donkey Calf Raise, 6 x 8-12
Thighs:
Leg Curl, 4 x 8-10
Leg Extension, 4 x 8-10
Leg Press, 4 x 8-10
Front Squat, 4 x 8-10
Squat, 4 x 8-10
Abdominals:
Weighted Situp, 4 x 25
Leg Raise, 4 x 25
Seated Twist, 1 x 200
Tuesday/Thursday/Saturday
Shoulders:
Barbell Front Press, 4 x 4-6
Behind Neck Press, 4 x 4-6
Dumbbell Press, 4 x 6-8
Upright Row, 4 x 8-10
Dumbbell Shrug, 4 x 8-10
Alternate Front Raise, 4 x 8-12
Lateral Raise, 4  x 8-12
Bentover Lateral, 4 x 8-12
Back:
Stiff Legged Deadlift 4 x 6-8
Barbell Row (standing on block), 4 x 8-10
Pulldown (or Behind Neck Chin), 4 x 8-10
One Arm DB Row, 4 x 6-8
Power Clean, 4 x 3-5
Triceps:
Dip, 4 x 8-10
tri-set with
Pushdown, 4 x 6-8
tri-set with
One Arm Overhead Triceps Extension, 4 x 8-10
Biceps:
Preacher Curl, 4 x 8-10
tri-set with
Incline Curl, 4 x 8-10
tri-set with
Concentration Curl, 4 x 8-10
Forearms:
Reverse Curl, 4 x 8-10
Wrist Curl, 4 x 8-10
Abs:
Repeat Mon/Wed/Fri layout
As mentioned above, Dave can complete each of the workouts, including waist and calves, in less than two hours, and he challenges any bodybuilder to keep up with him.
-  Mon/Wed/Fri: 63 sets
- Tues/Thurs/Sat: 91 sets
He rests 30-60 seconds between sets on most exercises, taking no rest at all on super- and tri-sets, which he frequently uses on most bodyparts. He starts with a lighter weight on the first set and adds weight on each successive set. He never talks during a workout and prefers to train early in the morning, before the gym gets crowded. He doesn't like to wait for equipment and the emptier the gym the easier it is to set up supersets and trisets.
Dave has a unique training cycle. He works out hard for six months of the year and then takes off and doesn't go near the gym for six months. He also maintains a sensible diet at all times. During his time off he hikes in the mountains and runs up to 10 miles a day. Surprisingly, he doesn't lose much muscle size in that half year. He says this type of training builds quality muscle that doesn't evaporate quickly, unlike what happens with steroid users.
"One week after a contest I've seen these drug champions look like they've lost 20 to 30 pounds of muscle," Dave says. "A lot of that steroid and human growth hormone muscle is water weight."
He can vary his bodyweight from 190 to 230 just by making a few modifications in his diet. To gain weight, Dupré uses two or three protein drinks made with milk and egg protein mixed with raw eggs and honey, in addition to three balanced meals a day. When he trains down for a contest or posing exhibition, he eliminates the protein drinks and milk products. He's also found he can get cut up on two meals a day and 16 ounces of half-and-half mixed with milk and egg protein powder divided into two eight-ounce drinks.
Nowadays, Dave is primarily a vegetarian. He feels that too much red meat can cause heart and arterial disease. "I do eat yogurt," he says, "and I'm not totally on a vegetarian diet, but I feel much better on this regimen. I have fewer aches and pains now that I've modified my diet."
Dave does a lot of walking - up to 20 miles a day, every day. Often when he's going somewhere, he drives to a certain point, parks his car and walks the rest of the way.
He's also appeared in several movies and his agent keeps him busy.
One of the things I admire most about Dave is his total involvement in the sport of bodybuilding. He frequently gives time to help promote local shows in the Los Angeles area, particularly natural bodybuilding events. He judges, acts as master of ceremonies and even sometimes guest poses for free. He also helps by scouting contestants and others to help run the shows.

Dave Dupré is truly bodybuilding's Renaissance man. He's done it all - a weightlifting, powerlifting and bodybuilding champion who has the respect and admiration of bodybuilders all over the world. And like his idol Steve Reeves, he's accomplished it by blood, sweat and tears without steroids or other performance enhancing drugs of any kind.
Now 50 years old with 35 years of lifting experience, he's getting even better with age. Dave Dupré is a real champion's champion.
Enjoy Your Lifting!