This is the third series of articles in which we outline the training methods of famous weight-lifters, the two previous articles having covered Kono's and Stogov's routines respectively.

Doug Hepburn is the only citizen of the British Empire ever to win a world weight-lifting title. He was also the first of the postwar power men and his achievements and subsequent effects on the physical culture fraternity as a whole are only now being felt. Today, six years after Doug's feats first became known, the possibilities of power training to both lifters and body-builders are more than ever recognized and respected, even by those lifters who tended to place technique above all other training principles. Doug's rapid rise to success was as follows:

In 1950, a fellow in Vancouver, Canada, wrote to that famous weight-lifting authority Chas. Smith of New York, telling him of a young man from his home town by the name of Doug Hepburn who was lifting tremendous poundages. At first Chas. was skeptical, but after entering into correspondence with Doug, he believed that maybe after all Doug really could perform the fantastic feats he claimed.

Early in 1951, Doug paid a visit to New York and immediately upon his arrival Chas. Smith took him to Val Pasqua's gym in the Bronx where Doug broke the longstanding gym records on every lift he performed, and these included:

all of which were performed after sitting up three days and three nights over the 3,000 mile journey from Vancouver to New York.

In November, 1951, Doug paid another visit to New York and it was on this occasion that I first met him, since we were billed to appear on a show together. At the show bench pressed 450 lb. and squatted with 600. He took 630 on the squat and just failed to come up right, but the following day the twelve 50-lb. discs which had been used on the squat bar were weighed and found to be nearly 2 lb. per disc overweight, so in actual fact, Doug had just missed a 660 full squat.

In 1952, Doug entered the heavyweight class of the American Junior Nationals, which he won with the following lifts: 369 (W.R.) - 290 - 360 = 1,100. Later that year, he lifted in the American Senior Nationals and took second place to the then world champion John Davis, who went on to win the Olympic title that year in Helsinki.

In April, 1953, both Davis and Hepburn lifted at Yarick's Big Oakland Show. Davis performed the Olympic lifts, while Hepburn did a 660 squat and a 450 bench press, and went on to clean and press two 155-lb. dumbbells and then to 165 lb. dumbbells - total weight 330, after having been handed them to the shoulder. This is the greatest dumbbell press ever performed. A few days earlier in Yarick's gym, Doug had cleaned and presse3d two 142's for 4 repetitions.

Later in 1953, Hepburn flew to Stockholm to compete in the World Weight-lifting Championships, where he annexed the heavyweight title by beating the long reigning champion John Davis. Doug's winning total was via 381 (W.R.) - 297.5 - 369 = 1047.5.

Doug's last contest as an amateur was in the 1954 British Empire Games which were held in his home town of Vancouver, British Columbia. He again won the title by beating his closest rival and fellow Canadian Dave Bailie, with the following lifts: 370 - 300 - 370 = 1040.

Later that same year, Doug entered the ranks of professional wrestling, but more recently opened up his own gym in Vancouver. That very briefly covers the highlights of Doug's career to date, and I shall now outline some of Doug's training methods which I know you will find both interesting and enlightening, for they indicate that he has given a great deal of thought to the question of getting the utmost results from his workouts. 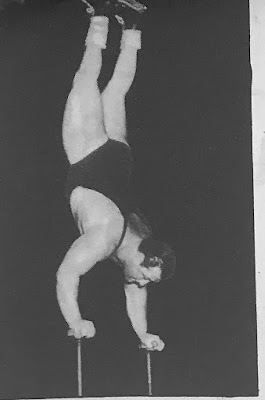 Here are his views on the very important subject of gaining weight, and I quote from one of his letters:

"I have always maintained that the basic weight-gaining exercises are performed with a barbell and that dumbbells should be used primarily for specialization. I believe that the foregoing movements are all that is necessary for gaining the maximum in strength and muscular bulk. First and foremost is, of course, the Deep Knee Bend. 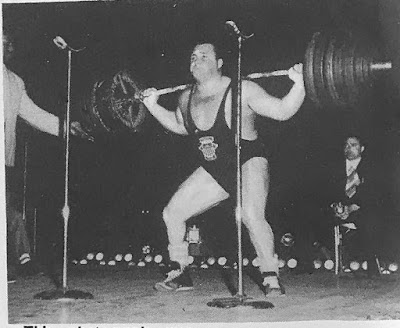 Photo taken at Yarick's 1953 show in Oakland, California.
665- lb. Squat.
"This exercise should be performed at the BEGINNING of a workout period, as I think that the trainee should not deplete himself on other minor exercises such as the Two Hands Curl, etc.,at the commencement of a workout as the returns in increased bodyweight are negligible due to the fact that the biceps and other assisting muscles form a very small portion of the trainee's muscular bulk. On the other hand, the Deep Knee Bend influences the large muscles of the hip and thigh region, which incidentally forms over half of the trainee's muscular bulk.

"The other primary weight-gaining movements are, Two Hands Dead Lift, Two Hands Press, Bench Press, and Rowing Motion with a barbell. These aforementioned exercises cover every major muscle group in the body and if performed conscientiously will see the trainee well on his way to his goal, which is in this case . . . maximum muscular bulk." 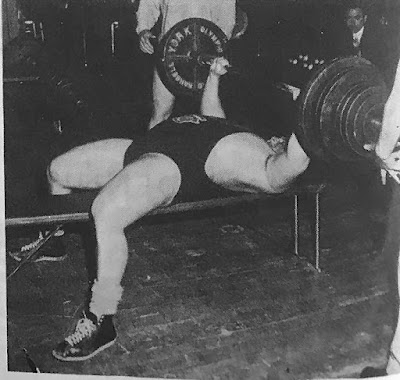 Some time ago, I had the quite natural desire to become the first man in Great Britain for Press 300 lbs. Learning of this, Doug wrote to me as follows:

"Train no more than twice per week on the Press and do 6-8 sets of 2 reps. Between these workouts bench press WITH THE SAME GRIP YOU USE ON YOUR STANDING PRESS. CONCENTRATE ON YOUR CLEANING AND ALSO DO HEAVY SQUATS IN SETS OF 5 REPS. This will improve your body power.

When Buster McShane and I decided to publish articles on the training methods of famous lifters, we naturally set about collecting as much data about the respective lifters as possible, and Doug in this respect was most cooperative. The following is Doug's reply to our letter to him in which we requested certain information, his reply to which was as follows:

Here are the answers to some of the questions that you asked.

I must admit that I always trained in a rather unusual manner, something in the manner of Paul Anderson. I have always believed that the heaviest weights possible should be used, as this tends to make the lifts (Olympic, etc.) seem lighter both physically and mentally. I have come to the conclusion that the One Rep System is the ultimate for producing the limit in strength.

I have found that long, hard workouts often cause exhaustion and although endurance is achieved the muscle tissue is torn down to a great extent and it takes too long to rebuild. Strength and endurance in regard to lifting limit weights seem to be in different categories. However, one can overdo the strength routine and get to the point where it is an effort to walk a flight of stairs and I have found that I tend to get extremely lazy (even to the extent of slacking in the actual workouts). I also found that although I was the strongest I was only good for two or three lifts. However, I could really explode with them and I actually believe that I can lift more at this time. I am a specialist so I am willing to sacrifice my condition for world records no matter whatever the cost, from the aesthetic or from the condition standpoint.

The routine that I used prior to the British Empire Games was this:

Deadlift -
first starting off with High Pull singles:
350, 400, 440, 475, 500, 520
after 440 I utilized the metal hand grips, something the same as used by Anderson. These enabled me to concentrate on the pulling muscles without tiring the hands. If you are interested I can draw you a diagram of these metal clips as I think they really help.

Doug did better than send us a diagram of the metal clips he uses for high pullups and deadlifts - he sent us actual photographs. The top photo shows the clip with the cloth through the hole at the top; the bottom one shows the cloth tied around the wrist with clip on the bar - resting in the palm of the hand.

The Hepburn letter continues:
Incidentally, these high pulls are a great chest and shoulder developer as they are sort of a combination of an upright rowing motion and bent rowing movement. 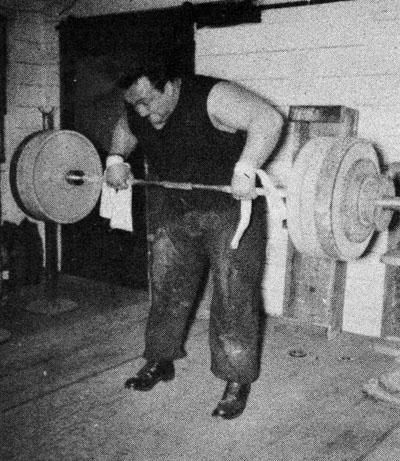 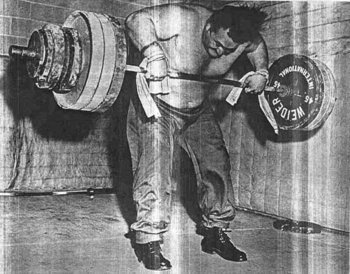 After the 520 high pulls (I did about 5 singles with this weight, resting 3-5 minutes between each), I would continue on with the deadlifts and worked up to singles with 700 lbs. Believe me, when you try a cle3an with 370 or so after this the weight feels like a feather.

I NEVER COMBINE UPPER BODY MOVEMENTS SUCH AS PRESSING WITH THIS ROUTINE. I think that the upper and lower body should never be worked at the same time when working for maximum strength.

One day layoff . . . I never worked to a strict routine and sometimes took two days layoff . . . I believe in working certain muscle groups thoroughly and then giving them a good rest.You can see that by training the upper and lower body separately that YOU CAN  WORK OUT AND STILL REST CERTAIN PORTIONS OF THE BODY . . . for when you are bench pressing and military pressing from the racks the lower body is still resting.

All for now, Reg. Hope this proves interesting to you, and if you wish I can write to you regularly and you can print this info in your mag, from time to time.