COURTESY OF TERRY STRAND
ALL GOOD ON YA, MAN! 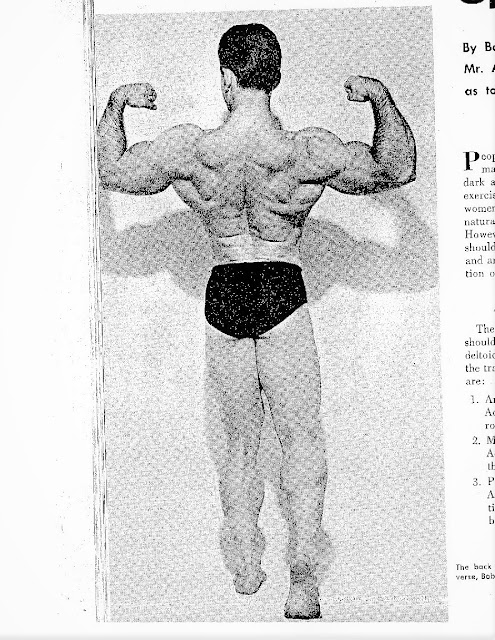 People are always impressed by wide shoulders on a man. Broad shoulders are almost synonymous with tall, dark and handsome. Relatively few men take the time to exercise their way to broad shoulders. They do as so many women, and rely on some sort of padding. This is surprising as naturally broad shoulders are not a common endowment. However, there is hope for those born with a narrow shoulder width, including this author, through hard work and as application of proper programming with consideration of anatomical structural weaknesses.

There are numerous muscles that are a part of the shoulder girdle but presently I will limit the discourse to deltoid function. When programming for deltoid exercises the trainee should consider three separate areas, which are:

The bodybuilder should be award that the deltoid complex serves many functions; pulling. pushing, stabilizing. The function of this muscle changes depending on the angle of the arm. It is because of this that I have used a great variation of movements in my workouts, and recommend that others do so also. Sticking to the same exercise has never done a complete job for me. I've known many trainers who will do nothing but press behind the neck or military presses, whereas I do everything that my imagination can devise. This practice has helped me greatly. Try it. There do exist valuable pieces of apparatus -- like expanders, pulleys, crushers, and many more that will benefit the trainee. They also should be incorporated into a program because they afford different angles of stress that cannot be accomplished with barbells and dumbbells.

In every sequence [search this blog for more on PHA, sequence training] I always do one deltoid movement because this is a prominent weak point of mine. I work the deltoids every single day but with great variation. Always consider that the deltoids move the arm in three different ways; front, side and back. Weightlifting movements are great for the shoulders and would by any standard by a great asset if incorporated into a regular schedule. I will elaborate on weightlifting for the bodybuilder in a later article

and mention it now only because it is worthwhile. I usually work heavy pressing and pulling movements on Monday, Wednesday, and Friday and lighter laterals with pulleys and expanders on Tuesday, Thursday, and Saturday.

Exercise No. 1: 3-Way Combination.
In this exercise I do three movements as one set. Seated, I do 10 reps of side laterals, keeping the knuckles up and arms straight. I immediately stand and lean forward and do 10 reps of bentover laterals. Be sure to keep arms straight, knuckles up, and hold at the top of the movement for an instant. Again without hesitation, turn the palms to face behind and do 10 reps of reverse kickbacks. The think to remember in this exercise is to return only to the knees and do not swing the weight When working laterals always lower the weight slowly and raise fast. At the completion of one set I will do four or five other bodyparts to alleviate congestion. This exercise can be really great for separation and definition.

Exercise No. 2: Seated Dumbbell Press
The use of heavy weights is the secret of this exercise. I usually start out with 55's and work up to 105 pound bells. I like 10 repetitions in all shoulder movements. Try to keep the back straight, and the feet braced. If you arch the back the pectorals will come into play more, thus cutting the benefit to the deltoids. This exercise is good for size building of the frontal and middle deltoids. 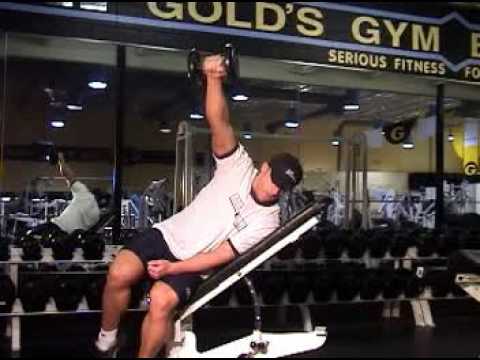 Exercise No. 3: Incline Side Laterals
Check photo for correct performance. Lower slowly. Perfect for working the middle (side) delts.

Exercise No. 4: Pulley Side Laterals.
Work on getting a good lateral delt contraction and lower slowly.

Exercise No. 5: Seated Press Behind Neck
This exercise is done on special racks at the Duncan YMCA. The hands are spaced as wide as comfortably possible.

Exercise No. 6: Expander Front Pull
This exercise is great for the rear delts.

Exercise No. 7: Press Behind Neck With Cambered Bar
I vary this form of press with exercise number 5 for variety. The cambered bar gives a terrific stretch, even though less weight is handled.

Every bodybuilder must decide which exercises will work best for him. No two men are built the same. Following a Steve Reeves' routine won't give you the same build. You have to use common sense. I've suggested many exercises, but don't try them all at once. You've got to determine your energy level and time allotment and program around that. I would suggest that the novice pick out one movement for each section of the deltoids and work up in sets and reps.

Again, I want to say that I sequence all my exercises and use anywhere from five to ten sets of ten reps each. Please don't do exactly as I do. Work out your own scheme to fit yourself.