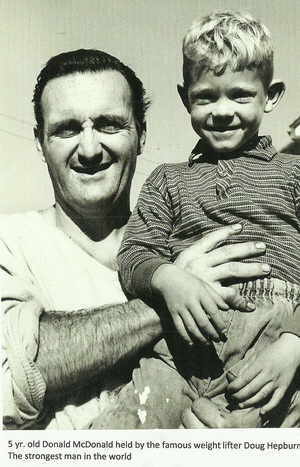 All matter is shaped or directed by force. Force precedes matter and therefore is of the greater importance. This principle, when applied to the weightlifter, simply means that the body (matter? when exercised correctly will strengthen and develop proportionately to the degree of force (mind) directed toward this end.

Thought or intelligence must precede material alteration and change; who could possibly perform any act, however small, before first consciously or unconsciously conceiving the idea. It follows then that the greater the degree of force or thought power expended upon a certain definite objective or goal the greater will be the end result or accomplishment.

Not only is the intensity of mind force all important, but also its constancy, for if the force of thought is directed away from the objective, even temporarily, then the efficiency of matter change is impeded.

If this mind force is removed and redirected not temporarily but permanently from the objective then the matter will change pertaining to this objective will cease, even retrogress. If, for example, the reader sincerely desires a large biceps muscle then mind force compels one to curl. The effected matter (in this case the biceps muscle) is in turn compelled to enlarge and strengthen in accordance to its inevitable biological process. Conversely, if this mind force is directed and focused, through redirection, not on the acquisition of a large biceps muscle but rather a new car, then the process of biceps enlargement will be impeded or will cease entirely.

One's personal sense of values has a direct bearing on the motivation and directing of mind-force. The degree of will-drive application to the objective-goal is dependent upon the degree of desire. If there is no sincere desire there can be little power of will. The desire for the objective must remain constant for the attainment of a worthwhile goal-objective is brought about cumulatively of in other words, as a result of regular unvarying training and living habits. If one's desire or desires remain in a perpetual state of fluctuation between one objective and another; if, so to speak, one is forever running "hot and cold" then there cannot possibly exist "singleness of purpose" and consequently little or no progress toward any one objective. This, in my opinion, constitutes the pitfall of the majority of aspiring strength athletes.

Some of our more prominent weightlifting authorities have often stated that "if our lifters are to continue to win, then weightlifting must be their first consideration." In other words, all other things must assume a secondary importance in the life of a dedicated weightlifter. Those who aspire to become top ranking lifters must be willing to make such a sacrifice and must do so without regret. The aspirant would do well to indoctrinate himself with the ideology that the attainment of a world weightlifting record is of a greater value to him or to the world than the attainment of material wealth. to minimize the importance of material-sensual satiation and must strive to elevate one's self and thought to the artistic and creative plane can very well result in the elimination of mediocrity and an entering into the realm of the exceptional.

There are some who will regard even the entertainment of such an outlook as naive or eccentric. I have never thought so, nor, I am convinced, do any lifters of world championship caliber. Here then is the "proof of the pudding," for these men their accomplishment is the sum product of their ideation. Again there are some who will dispute this statement. On what grounds, may I ask, is their argument based, unless they have accomplished something exceptional themselves.

A dedicated athlete, in order to be assured of realizing his or her own goal, must be selective and desire to take no more from the world other than that essential to the process of attainment. Superfluous material possessions and the maintenance of same tend to complicate and disorganize a simple existence; such an existence is the prime prerequisite of the potential outstanding athlete.

There is one, and only one road to a world or Olympic gold medal. This road contains no sidetracks or detours. It is a road moistened by sweat and the air above sweetened with the perfumed Zephyrs of inspiration. It is indeed a worthy road to travel.