Another Pre-Keys to Progress McCallum Article (1964) 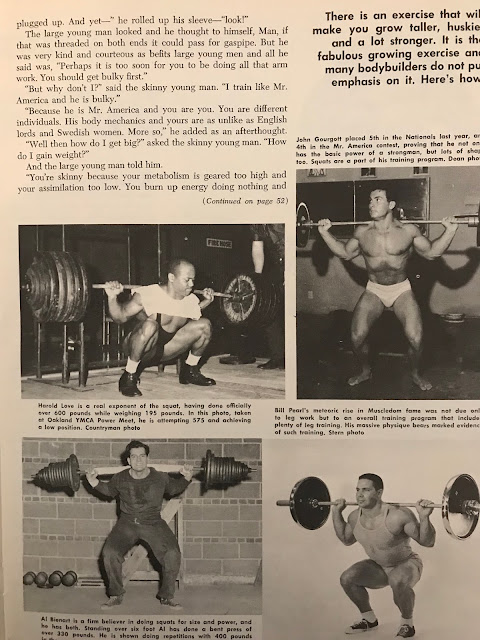 Originally Published in This Issue (July 1964)

Once upon a time there was a very skinny young man who trained with weights. He wanted to get big. And so he trained very hard. He did all the super-duper routines the champions do. He did every exercise in the book and a few that weren't in the book. He trained long and diligently and never missed a workout.

But he didn't get big.

And the large man asked him what exercises he did.

"I do them all," said the skinny young man. "Right now I am doing the same routine as Mr. America."

"But you are not Mr. America," the large young man said.

And the skinny man was forced to agree that certainly this was the case.

"Perhaps," said the large young man, "you are doing too much."

"No," said the large young man. "That is not the case. Your algebra is flawless but your theory is faulty."

"But I know for a fact that Mr. America takes long hard workouts."

"But it makes no sense," finished the skinny young man. "I do all Mr. America's arm exercises by the hour. I have flushed till the drain plugged up -- and yet --" he rolled up his sleeve -- "look!"

The large young man looked and he thought to himself, Man, if that was threaded on both ends it could pass for a gas pipe. But he was very kind and courteous as befits large young man and all he said was, "Perhaps it is too soon for you to be doing all that arm work. You should get bulky first."

"But why don't I?" said the skinny young man. "I train like Mr. America and he's bulky."

"Because he is Mr. America and you are you. You are different individuals. His body mechanics and yours are as unlike as English lords and Swedish women. More so," he added as an afterthought.

"Well then how do I get big?" asked the skinny young man. "How do I gain weight?"

And the large young man told him.

"You're skinny because your metabolism is geared too high and your assimilation too low. You burn up energy doing nothing and you don't digest your food. Otherwise you'd gain weight without exercise.

"You've got to alter your bodily functions and you won't do it with arm work. Concentration curls don't build bulk. Not on 'hard-gainers' anyway.

"Super-duper workouts won't build bulk either. You have low energy reserves to begin with. The calories you burn on Mr. America's advanced program should be used for simple growth. You're sweating bullets while your physique slowly sinks in the west.

"And what is the growing exercise?"

Squats. but squats done in a certain way.

Start your workout with the following:

This isn't much work. It's not supposed to be. You're saving your energy for the growing exercise. Use enough weight to tire your muscles but don't kill yourself. This is only intended to stimulate your upper body growth.

When you've finished the above, sit down. It doesn't matter how fresh you feel or how anxious you are to go. Sit down and relax. Relax completely for at least 10 minutes. Put your feet up and meditate on how well you're going to do the next exercise. Sip milk. Rest!

Squats are the key exercise for bulk. Everything else is window dressing.

"But Mr. America does lots of arm work," interrupted the skinny young man.

Properly done squats will readjust your metabolism. They will increase your assimilation of food. They will stimulate your respiratory and circulatory systems. They will enlarge your chest like nothing else. They will force growth in the large muscle groups of your body. They will produce weight gains where everything else has failed.

Properly done squats will provide you with a new physique. A physique that is big, shapely and powerful.

Put padding under the bar. Squats are tough enough. There's no point in making them painful.

Step under the bar. Straighten up and back up two or three steps. Don't face away from the rack. When you finish you'll be too tired to back into it.

Ride the bar low on your shoulders. Keep your head up and your back flat.

Open your mouth wide and gulp in all the air you can. Blow it out violently. Take three enormous breaths and squat on full lungs.

Don't hit bottom. Squat till your thighs are slightly below parallel and no further. Drive up as hard as you can and exhale. Take three more lung busters and squat again.

You must breathe through your mouth. Open wide and make like a vacuum cleaner. If you can get enough air in through your nose you need plastic surgery.

This breathing is all-important. If you're not going to breathe properly don't bother doing the squats.

When you finish you'll be completely winded. You'll sound like the Wabash Cannonball. Go immediately to a bench and do pullovers. Do them 20 reps with a light weight -- 20 to 40 lbs. Breathe deeply during the pullovers. Try to make your chest ache. If you do this properly your sternum will feel like it's been worked over with a ball-peen hammer.

You're doing three sets of squats. Rest at least 5 minutes between sets. Drop the weight about 10% for the second set and 10 more for the third set. Do 20 pullovers after each set.

When you have finished the third set that's it. Quit! Stop! Don't do any more. You've done exactly the right amount to force growth. Any more will defeat your purpose.

"Have you got that?" he asked.

And the skinny young man who had been watching a chesty young woman mince by and not paying much attention said, "Did you ever notice that Mr. America's bicep comes to a peak?"

"It does," said the large young man. "It certainly does. So does my uncle's head. Now pay attention!"

"Work out three times a week. No more. Don't do any training on your in-between days. Use all the weight you can. Keep adding to it. You can do it. If you're squatting with 300 pounds you do 5 pounds more."

"Is your uncle a weight lifter?" asked the skinny young man.

"No. Now we come to diet. You've got to eat plenty. Eat all the good food you can. Eat everything but the knife and fork. Eat three meals a day and take a snack between meals and at bedtime. That means six meals a day. Three big ones, three small ones. Drink milk. Lots of milk. Two to four quarts a day. It's important. Keep good quality protein in your stomach all the time.

"You don't suppose," said the skinny young man, "that this might hurt my definition?"

The large young man's eyes became pained and he closed them. But he thought, what the heck, and when he opened his eyes again they were clear and friendly.

"Forget your definition," he said. "Forget it for now anyway. You're specializing on gaining weight. When you gain the weight you need then you can eat normally and train differently. But not now. Don't try to do everything at once.

Will you give it a whirl?"

And the skinny young man who was very impressionable ad easily inspired said, "Yes, by golly, I will" And remembering to keep his lats spread he spun around and marched away.

He went home and started the regime, and he gained 35 pounds in three months. Then he went back to arm work. And because he was heavier and could gain weight now, he made progress.

Six months later he was down at the beach kicking sand in everyone's face and he met the large young man again.

The large young man looked at him and he said, "You've really made progress."

"Yes.' And he flexed his arm and said, "Look. Peaked biceps."