As power lift training continues to progress, the individual is becoming less subject to his own devices, less a victim of his physical weaknesses, and now enjoys the steady hand, the moral support and the standby intelligence of a partner, who himself is actively physically involved in a joint effort at making a lift. Some years ago when the great heavyweight lifter, Dave Ashman, was getting perilously close to a 500 pound squat clean, he had a training partner, a kind of muscular elf, who used to squeeze himself under the hunched-over hulk of the big lifter to give the bar an initial boost with his hand. The mischievous sprite's name was Bill West, Ashman was his idol.

Together they had doped out a touch system for getting Ashman's heavy cleans off the floor. By and by the elf himself grew, and today towers as the national middle heavyweight power lift champion. "If I had used the touch system then as we have developed it now," Bill surmises, "I think we could have put Ashman over the five hundred mark."

The touch system as Bill West's power lift group now practices it is strictly as hands on policy. When Bill was tinkering with Ashman, he never thought of touching anything but the bar. As time went by, he thought why be so conservative -- get in there and really help the guy trying to make the lift. Get hold of him bodily when necessary, apply the pressure.

The closer the contact, the more realistic the assistance. The idea started getting clearer when Bill used the heavy touch system on the power rack bench squat.

How was a man going to get that first squat started from a sitting position on the box or bench with the bar resting on the shoulder level on the cross pins, loaded to two or three hundred pounds more than his best regular squat? A helper on each end usually results in an uneven spot. A steadier and more practical way proved to be the method of getting directly behind the lifter, bear hugging him under the arms, and simply boosting him to a standing position. Once started, the continuing action of repetitions became possible.

A different situation presented itself on the dead lift. He could have used the method he once practiced with Ashman. But cleans are one thing and dead lifts another. Furthermore, he was beginning to see the effectiveness of spotting the body rather than the weight.

The full squat touch system, where the hips were given a spank upwards, worked to a questionable degree on the dead lift. How could you get by that common sticking point just above the knee? If you touched the bar at that stage, the timing was usually off and it might scatter the effort. Again, a position directly behind the lifter offered the best possibility for control.

Attempting to use the bear hug method as in the bench squat proved awkward. But there it was, the whole engine, exposed, and he was the mechanic to do with it what he could.

The problem was to apply pressure and at the same time preserve the lifter's balance. Then in the manner of a bouncer giving the recalcitrant the old heave-ho with the collar and the seat of the pants, he found the way to bring the lifter to the erect position. Actually more than exerting an upward force to bring the lifter erect, the spotter applies, rather, a force of leverage. He grasps the trapezius of the shoulder with one hand, and the other hand he places flat on the butt. By exerting a forward thrust on the butt and a backward pull against the trap the resultant action is an upward movement of the body.

With this touch system the spotter himself gets the feel of the lift. He doesn't have to apply pressure until he feels the lift reach a sticking point. This point may vary according to the individual lifter and the kind of dead lift he is doing -- extended, regular or high. The method of putting one hand on the trap and one hand on the butt works for both the extended dead lift and the regular dead lift.

The high dead lift requires a different approach. Since the upper body is nearly erect at the start of the high dead lift, a pressure on the butt seems to push the lifter off balance. Therefore, a method was devised to grip both traps with both hands and exert a backward pull. The resultant action is also an upward movement of the body. The method may prove awkward at first, but after a bit of practice, the spotter gets to know the lifter's particular sticking points and the amount of help he really needs.

The whole idea of this touch system is to transfer power past sticking points. Complete movements can be made with heavier than limit lifts. The lifter gets the opportunity to use very heavy weights. His strong areas are not limited by his weak ones. The strong areas get the chance to work at nearer full capacity, and when the sticking point is reached, auxiliary power is used.

In effect, the touch system belabors a point, keeps hammering into the mind and the muscles the need to exert greater and greater effort. Eventually the point gets across. The lifter no longer faces the hopelessness of sticking points. He can now get across the points.

Where does this touch system begin? How much of it do you use? First of all it is used in an area that transcends your regular best. It starts where your limit lift leaves off. The extent of its use is limited by the precariously heavy weights involved.

Take the case of a man who can do a regular limit dead lift with 575. How many dead lift training sessions go by where he may never handle any poundage near that figure? Too often it is too many. Now with the aid of the touch system his schedule goes like this:

He was assisted on only the last two dead lifts, both of which were in excess of his regular limit. That's all he needed. He has broken a barrier. He might have had the capacity of lifting the 605 off the ground maybe eight inches unassisted. The rest of the lift remained in the dark. With assistance the picture changes. He completes the lift, he activates new muscles, and additionally, he makes a mental hurdle that, by its positive nature, remains as a new and willing force.

Middleweight Leonard Ingro, with an official 580 dead lift, had been trying 600 unsuccessfully for months. In a very few workouts with Bill West behind him applying the touch system on single high dead lifts with poundage ranging from 615 to 630, he made a regular full dead lift with 600.


Regardless of the lifter's caliber or experience he should allow for a breaking in period. The lift is new, the weight is heavy, and there are unforeseen strains. He would wisely practice repetitions for at least thirty days.

Let's say a man whose best dead lift is 500 wishes to start using the touch system. A starting schedule would go like this:

On this kind of schedule he would also tend to preserve his maximum regular dead lift by training his limit twice a month. Take note of the fact that where repetition touch lifts are practiced, the sets leading up to them compare in number of reps. The lighter reps burn a groove for the heavier reps to follow. It makes better lifting sense to practice this way. Sudden changes, from high to low reps, or vice versa, break a continuity that disturbs intensity and coordination of effort.

A glaring aspect of power schedules is the single heavy rep for many sets. Effort remains essentially constant. Bill West, himself, was averaging 575 from the deck in every dead lift workout. But for some reason -- and it went on for a whole year -- he could not make a 600 dead lift. The secret eluded him. He knew if you could high dead lift heavy, this regular dead lift would go up. In a brief period, using the touch system, it happened exactly that way. His high dead lift program went like this: 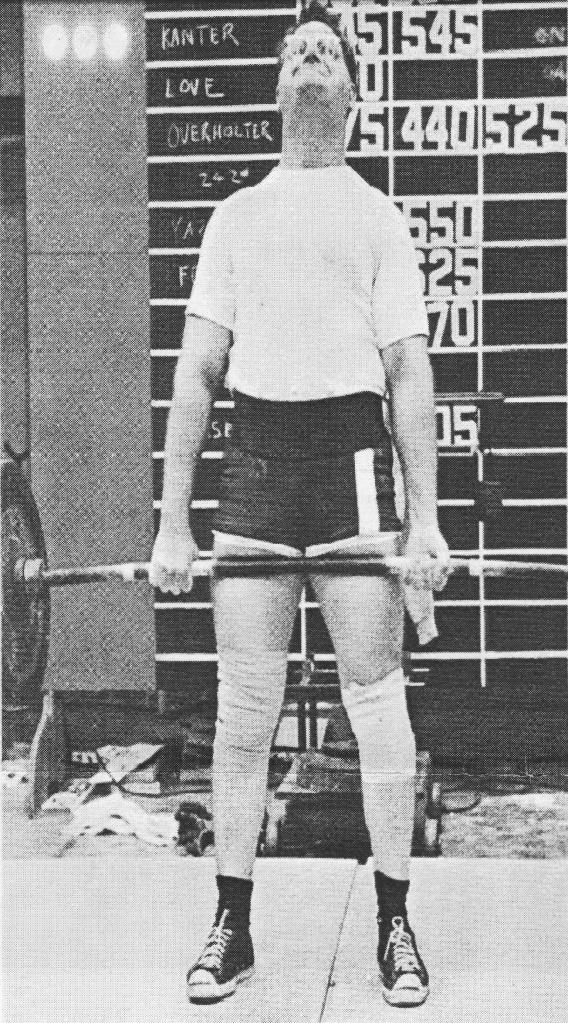 Joe DiMarco, another heavyweight lifting mate of West's with the touch system, brought his deadlift from a hopeless 425 to a hopeful 575 in 60 days.

For all its basic power building quality the touch system offers a side feature that might be half the answer to better deadlifting -- stronger forearms and a tighter grip. The next time you see a dead lift observe the length of pulling time and the arch in the bar before the plates ever start to leave the deck. It is often long. What at first seems a failure somehow turns into a triumphant success --

with Oscars for the grip and forearm at that!