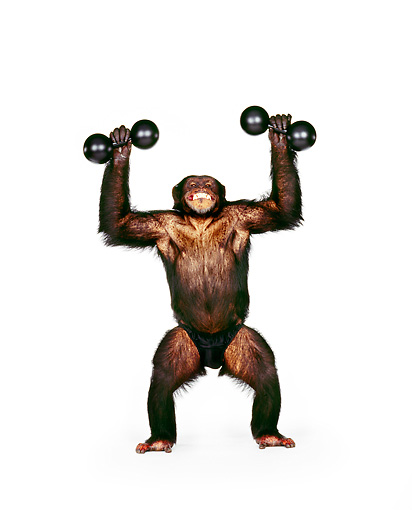 My essay title accurately expresses many individuals' view of competitive sports with weights "from the outside," so to speak. There may be some justification for this. It is simply massive amounts of weight being grunted into the designated position.

Or so it can seem.

It may be true of every sport that it can only be fully appreciated through participation, but it is also true that the beauty and concentration involved in some sports is worn more on the sleeves of competitors (if there are any sleeves) than is the case in sports with weights. Athletes that compete in golf, tennis, the high bar, or the balance beam make their beauty and their incredible mental difficulty manifest. Perhaps that is not so much the case with lifting weights, which seems brutish and short in comparison.

So I am, for the most part, going to comment on the aesthetics and epistemology of lifting weights from the internal perspective -- from what the lifter feels and thinks. We shall find, I argue, that the aesthetics is not crude and the epistemology is not mindless.

Perhaps the best place to start is with questions of knowledge. Lifting weights is not only a sport but a skill, and skills are a kind of knowledge -- a knowing how. Of course, anyone can lift a five-pound weight over his head, but we would not likely call that a skill rather than a simple physical ability. Knowing how to lift 300 pounds over your head is obviously an entirely different matter!

Interestingly, skill-knowledge or knowing-how involves or requires another kind of knowledge: knowing that. To have lifting skill requires that you know many things -- e.g., that your grip should not be too narrow during the snatch, that your weight should be on the back of your heels as you deadlift, or that the best time to begin exhaling during the bench press is as the bar nears completion. You can't have the skill unless you also have this kind of knowledge. It's interesting that it doesn't work the other way around: You may know all the correct principles, yet not be able to bench even 200 pounds.

It must be admitted that this knowledge of principals may be implicit in some cases. Some lifters are naturals and figure out quickly what needs to be done. But notice that we still talk about knowledge here: They know that their hands must be placed wider than their shoulders, that they should not bend their back, or that their forward foot should be angled inward during the lunge in the clean and jerk. So, again, skill-knowledge implies or involves knowledge that, either explicitly, through coaching and learning, or implicitly, through natural endowment.

We have so far been talking about knowledge and its connection to technique. But there are other forms of knowledge that are equally important. One example is a lifter's knowledge of his own body, its strengths and limitations. As in other sports, technique interfaces with, and gets altered by, what the athlete brings to the table. He must know what his back, knees, pecs, and triceps can do and how their power interrelates in order to have control of his total strength. This involves both analysis and synthesis. Analysis can be seen most easily in the secondary exercises that are part of any powerlifter's or Olympic lifter's regimen. Each uncovers physical facts of strength (e.g., are my biceps much stronger than my triceps, my lower back tends to cramp, my quads get lactic more quickly than my glutes, etc.). This knowledge can then inform the lifter's style. Do I move fast through the clean and rely on my shoulders, or slow, relying more on my legs? That depends on my shoulders and legs.

Synthesis occurs when, with this analytic knowledge, one takes maximum advantage of one's strengths and minimizes the effects of one's weaknesses in a particular lift. And this is a matter of knowing what you want to do -- i.e., how you are going to execute the lift -- and that is another kind of knowledge, which is different from the skill itself, and is more than mere knowledge of principles.

Although there are many additional forms of knowledge involved in lifting weights, I will mention only one more -- knowledge of the nature of competition and its dynamics. You can see the power of this knowledge clearly in Olympic competitions when a lifter will pass over a certain, sometimes incredibly high weight with the confidence that he will make an even higher weight. That is definitely a competitive "move," but notice how it also depends on the lifter's self-knowledge, as we spoke of above.

One might argue that competitive sports with weights are really only competitions between the lifter and the weight. In a sense that is true, perhaps more true than in golf, e.g., where you might also conjecture that the competition is between the golfer and the course. But we all know this is ultimately not true in golf, because there is so much strategy involved in the play, and that strategy takes into account the performance of other golfers.

I think we must admit that things are, in fact, more straightforward in lifting, and it is preponderantly a matter of the lifter succeeding over the weight. But there is a sense in which you can compete with the weight, and you certainly can compete with yourself: "I lifted this last Friday; I should be able to lift it again this Friday." So, knowledge or understanding of the competitive spirit is surely possible, even in what sometimes seems a wholly individualistic sport like weightlifting.

The feeling of competing with yourself and the weight is central to the phenomenology of lifting weights. Much more of that phenomenology is constituted by experiences that have significant aesthetic dimensions.

Of course, there are external aesthetic features to lifting. One can surely appreciate the sense of power, speed, balance, or timing that one experiences from observing a beautiful lift. Yes, sometimes the sport can strike us as crude and brute, but it also can be awe-inspiring to see the combination of confidence, strength, will power, and athleticism involved in an exceptional lift. Consider watching Iranian weightlifter Hossein Rezazadeh digging out of the squat portion of a clean and jerk, when it can initially seem that he is buried by the weight.

But, again, I believe that the most significant aesthetic dimensions of lifting weights are internal to the consciousness of the athlete.

What I mean is that the lifter can become aware of and appreciate the aesthetic properties of his own movements during a lift.

There are analogies here to the aesthetics of dance.

One can sense the smoothness of one's movement, feel the continuous power of one's muscles throughout the move, realize that the various parts of your body are working equally in unison or not, experience a sense of control or a sense of abandon or recklessness and so on. These reactions are a kind of internal observation of one's body and its movements, but the aesthetics of lifting weights can go at least one further step.

Lifting weights embodies one in a way that, for example, writing does not. Here, as I now write, i am sitting, thinking, and typing. I am sedentary. I certainly sense my body, but I am not at present involved with it as I will be when I leave for the gym in the next hour.

Embodiment doesn't mean that you become nothing but your body, but that your awareness becomes focused on your body in a more intense way than usually occurs in daily activities. It is an important sensory difference. One can move and hardly be conscious of it, but one also can move so that the movement is a distinct part of your current awareness. Lifting weights is a form of this embodiment, because it forces your attention on to your body and how it is reacting to the lift.

There is pleasure involved here, too. "Feel the pain" is really an indirect reference to the pleasure one feels from an extremely intense and successful bodily motion. One feels the pleasure of the lift, which, of course, is how it should be, since we are talking about embodiment. The pleasure involved lasts beyond the lift in many cases. One feels "pumped," in both literal and metaphorical ways, quite some time after the workout is over. This implies that the pleasure one feels is a result of the awareness one has of one's body and its condition.

So there are both aesthetic and epistemological components the "crude and mindless sports," I think. They are major reasons why I lift and, I hope, why many others do also. Surely, there are brutes who have never given a thought to these ideas, but there are brutes everywhere. That does not mean that there is nothing to appreciate in weightlifting other than a grunt.

Pay attention next time you lift.
It is an experience.