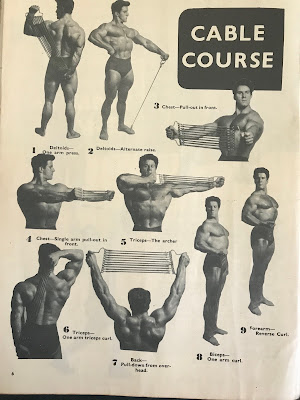 The barbell is aptly called the "KING" of all physical culture apparatus, for it is the barbell and dumb-bell which give the best and quickest results both in strength and development.

The advantages of barbells and dumb-bells over any degree of "free exercising" is that it is progressive, for whenever you can lift a certain weight with ease and by doing so feel that your muscles are not getting the correct amount of exercise, this can easily be rectified by adding more weight.

Unfortunately, however, there are many of us who do not have access to weights, or if we do, it may be that from time we find ourselves unable to get down to the gym in order to take a work-out. This has happened to me on several occasions in the past, many times when I have had to take part in shows, several thousands of miles away from home, I have not known whether or not I would find a gymnasium in the town, and being desirous of maintaining TOP CONDITION, I have made it a practice to take along a set of CABLES or a JIFFY GYM.

Note: This was 1954. A time before there were three story gyms packed with every imaginable form of resistance training gear on every second street in every Podunk town. Really! I kid you not. In some cases picking your toes in Poughkeepsie was the only form of workout available back then. Just ask Gene. Check out his YouTube Watch Me Watch People Picking Their Toes in Poughkeepsie channel. Spreadsheets for Maximum Toe Picking Efficiency Programs also available. I sorta kinda miss the naivete of the older eras, a far cry from ours of today where every dipshit bald-headed social misfit lifter with a tattoo, an eating disorder and a drug dependency . . . retired, beer on porch in afternoon, get off my lawn, you know the drill, etc.

I mapped out a schedule which I considered would give me the best results, and worked on it diligently. Strange to say the results were very gratifying, for not only did my muscles maintain their size and development, but they also took on a fuller appearance due to the pressure being exerted on the muscle over the complete range of motion.

I have given the question of training with cables a great deal of thought and in all sincerity I confess that my genuine opinion is that cables can be utilized in such a way as to make them as efficient as weights. I say this because when one exercises with cables the strain is put on the muscles the moment they are stretched even a couple of inches and remains at such until they are allowed to return to their natural form; whereas when one trains with weights there are many lifts which have what we term "sticking or slack points" and once this position has been reached, little or no muscular benefit is achieved from the rest of the movement. The benefit is achieved from the rest of the movement. Cable sets can in fact be used along similar lines as weights, and the same movements can also be performed.

Do not run away from the idea that I am disparaging the use of barbells, for I confess that I am one of those muscle-heads who are primarily concerned with "HOW MUCH CAN YOU LIFT." My aim in writing this article is to emphasize the importance of cables, for I feel that many physical culturists do not realize the extent to which cables can be used.

Perform each of the following exercises, 4 sets of 10 reps, using as many cables on each exercise as possible. Remember to breathe in before each repetition and exhale on the completion of same. This routine should be performed 4 days each week for the best results, but if you are training with weights, then follow it only twice a week.

Exercise 1.
Starting with the deltoids, which from the point of view of physical appearance are one of the most important groups, the first exercise is the alternate one arm press. Hold the cables as shown with the left hand as low as possible, and the right hand held at shoulder level. From this position keep the left arm straight and push the right hand press overhead to arms length, then lower and repeat another nine repetitions. Perform the same number of reps with the left hand.

Exercise 2.
The next deltoid exercise is the alternate raise. From the starting position as shown, keep the left arm close to the body and keeping the right arm straight raise it to shoulder level and lower to starting position. Repeat another nine reps and then change hands.

Exercise 3.
For the chest I prefer to start with the pullout in front, an exercise which I am sure you are all familiar with. The cables are held in front of the body at shoulder level and from this position, keeping the arms straight, pull the expanders outwards until they are touching the chest and return to the starting position.

Exercise 4.
The next chest exercise is the single arm pullout in front. The starting position is as shown. Keep the left arm still and pull with right hand until the strands are once again touching the chest then return to starting position. Remember to keep both arms straight when performing this exercise. Change hands and repeat.

Exercise 5.
The next group to be worked is the triceps, and the first exercise is the archer's movement which is one of the best triceps developers which has yet been found. From the starting position as shown, keep the left arm straight, pull the right arm outwards until it is also at arms length, then return to starting position. Be sure to keep the arm performing the movement at shoulder as this throws more work on to the triceps.

Exercise 7.
For the back the pull down from overhead is excellent. Hold the cables at arms length overhead, and keeping the arms straight, pull downwards until the strands are extended across the back, and return to starting position.

Exercise 8.
Now we come to the one arm curl with the palms up. Place one foot in one handle of the cables and grasp the other handle with your hand. From this position curl your hand to shoulder level ONLY and lower to starting position with the other arm.

Exercise 9.
The last exercise is the alternate reverse curl. It is performed exactly as the above exercise only the palms are turned downwards and the wrists are kept bent throughout the entire movement. This is an excellent forearm developer.

Well, there you have it, but don't wait to go on a journey before you try it out. DO IT NOW and I am sure you will be as pleased as I was with the results obtained THROUGH CABLE TRAINING.