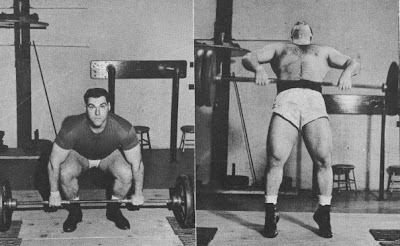 Gary Gubner's career as a weightlifter has been one of ups and downs. From a time when he primarily used weights as an adjunct to his shot putting, he now is solely a lifter. As a teenage lifter Gubner pressed over 400 lbs. and totaled in the mid 1100's. By the 1964 Olympics his total was over 1200 and he was second in the world.

But then Gubner didn't equal this total again until spring of 1967, and since that time, instead of going up, in his two most recent contest he washed out on all his presses and then lost to George Pickett.

His form hasn't improved much over the past few years, yet his press has shot up regularly. But Gary hasn't been training steadily all that long -- a total of six years off and on -- and his shot putting has regularly interrupted his weightlifting.

Therefore, steady training, something Gubner hasn't had, can make him number one in the world. And so will form work, as will handling more weight in his workouts. For all his immense power, Gary Gubner doesn't handle too much in his workouts; a contrast to Bob Bednarski, say, who handles record poundages regularly.

What does Gary have to say? In his usual quiet but articulate way, he sees steady training giving him the improvement he needs to finally get that international title.

Despite his immense power and size, 6'2", 287 pounds, Gary has a number of problems to deal with. One of these is drive. "I've been extending too much in contests lately, entering too many," says Gary. As a competitive athlete, Gubner is used to psyching up for shows, not simply working on power, and this is part of the explanation for his erratic performances. Gubner handles much more in contests than in training; if he's really up for a show then he'll do well, and if he's not then a low total is the result.

Motivation is a problem for anyone who trains alone, who has a busy insurance practice that takes up time, who has a young family, who unfortunately doesn't get encouragement from the "powers that be," powers that want to see their own man a winner. Gubner is in all these classes. Seeing him in a contest, Gary doesn't impress you as being particularly full of energy or psyched up; rather, Gubner does get himself into the proper mood by deep, slow concentration. In fact, he seems to take interminably long getting up to the bar. Perhaps a bit more speed would help, perhaps not.

Another problem Gubner doesn't talk about is the fact that, due to his many years of shot putting his right wrist, elbow, entire arm and right leg are all bigger and stiffer than his left side. It will take some years of lifting and not throwing to make this up, if at all. One of the results is that lack of wrist flexibility causes him to lose cleans. Furthermore, his last fling at throwing the shot a couple of years ago resulted in such bad elbow problems that Gubner has his right arm in a brace.

To combat this right-side problem and build better form, along with pushing himself in workouts a little more than in the past, Gubner is now doing higher reps in his workouts, 3 to 5 instead of his usual 1 to 3 reps.

"I like reps for flexibility and positioning," says Gary. "When you get to the 3rd, 4th and 5th reps, then you have to be in a good position in cleans and the like, or you can't hold the weight." As if to make this point, we watched Gary make four perfect cleans with 325, then get dumped on the fifth rep by a bad position. Later, after missing 400, he ripped up a perfect power clean of it right afterward.

Gubner's routine at this time is what he called his "summer routine" -- a combination of form and power. It consists of just four exercises, done in the following sequence:

Gubner uses wrist straps to insure proper grip on the bar, and takes 1.5 to 2 hours a workout. His views on other aspects of training are interesting.


On Contest Training:
"I cut down on Squats, keep the weights high, cut the exercises down. I usually build up to 25-50 pounds under my best, depending on the lift."

On Power:
"Pulls are the best single power exercise, not deadlifts. You can't clean heavy weights without momentum, and you can't get that without pulls. Deadlifts are basically slow."

On Gaining on a Lift:
"Take a layoff on that lift. I usually can come back and hit my best right away, which gives me more drive to improve."