From: Confessions of a Fitness Model by Madelyn Moon (2015) 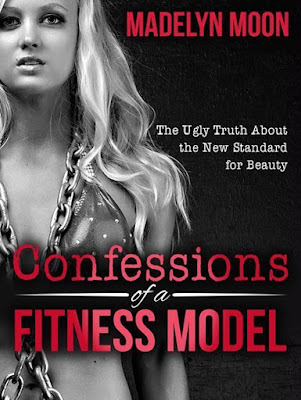 That's but a short list of qualities and characteristics needed for someone to become a successful fitness competitor. It reads like a list of English words with the most positive connotation. It's no wonder that those who become successful fitness competitors and models are indeed held so high up on a pedestal for the rest of us mortals to worship.

But should we worship them? Are fitness models really elite specimens who represent the best of humankind?

And are the extreme feats of discipline with bland, unsatisfying food and multiple grueling workouts per day something to be marveled at and glorified. Or is this really just a greater manifestation of a society that is sick -- mentally, emotionally, and physically?

I'll let you come to your own conclusions on that, but I will say I find it quite odd -- kind of scary, really -- that it has become so fashionable of late to glorify self-denial. From Gandhi to the latest ultramarathon winner, it seems we can't give enough praise to those who suffer voluntarily.

And while vanity and the finest physical specimens of any species, humans included, have always been celebrated, we've become fixated on it recently beyond the threshold of normalcy. Or maybe I just spend too much time on the internet. Don't we all, though.

We've also reached new heights of fixation on food and fitness in recent times. Who would have thought a few decades ago that some of the most popular television shows on earth would be about people losing weight? Or that one of the most popular male comedians (Jim Gaffigan) and one of the most popular female comedians (Amy Schumer) would be building their acts around their physical appearance and food? Gaffigan has a bestselling book and comedy tour called Dad is Fat. Just recently Amy Schumer's interview on Ellen is being hailed as "the best ever." She talked mostly about her slightly fat arms and how she engulfs popcorn.

I'm telling you. We, as a society, are becoming downright obsessed with food, fitness, and physique. I've been as caught up in it as just about anyone on earth, and it started when I was only six years old. In fact, when I asked at my kindergarten graduation what I wanted to be when I grew up, I proudly belted out my wish to become a "black boxer." It wasn't that the sport was so entertaining to me. I greatly preferred to watch other sports. It was all about getting "bumps in my stomach." To look like one of those sweaty, glistening, ripped black guys under the lights in the ring -- that's what I wanted more than anything in the world as just a kid!

I don't profess to have the cure to this problem either. The first step in fixing it is developing some sense of awareness that we are all nuts. I'll happily confess to this characteristic when it comes to food, fitness, and physique. I've tried every crazy diet on earth, am a human encyclopedia of useless nutritional information, and I still can't break the addiction of watching shirtless YouTubers talking about what they eat and how they train.

This insanity has taken quite a toll on my body and mind over the years. But you think I have it bad? Fitness competitors and models are the ones truly caught in this obsession's crosshairs, and what they put themselves through comes at a much higher expense than the public realizes.

I'll never forget the first time I met a fitness competitor. She showed me pictures of herself on stage, but at the time, she had rolls of fat with stretch marks hanging over the waistline of her pants, and her hair had thinned out enough to see the top of her scalp. She couldn't have been more than 32-33 years old tops. And she spoke repetitively like a crazy person about how she needed to really get back into shape. To get back on her supplements. To follow the diet that her trainer had put her on back in the day. Yikes.

It surprised me quite a bit to later learn that problems with weight gain, falling hair, and obsessive preoccupation with body image was not rarer, but par for the course among many fitness competitors and wannabes. It really shouldn't have surprised me. I did reach the point of having those "bumps in my stomach" once, only to become obsessive about food, spend over an hour per day in the gym checking and looking at myself in the mirror, lose my libido among other problems, balloon back up in just a couple of weeks after getting down to 5% bodyfat, and start waking up to a pillow covered in my own lost hair.

You'll be surprised, too, as you read this very personal, in-depth revelation of the fitness underbelly by Maddy Moon.  This is very courageous of her to write. In fact, I was the one that originally encouraged her to write this book with this very title, but she didn't want to. It's not easy to revisit past traumatic experiences.

But she quickly realized that this story needs to be told, all in one place, and told vividly and personally. That's what you're about to get as you jump into her work, which is her finest yet. We all owe her a debt of gratitude -- aspiring fitness models, fitness voyeurs like myself, and armchair observers -- for having written it so passionately and purposefully.

No matter who you are, the life of a fitness model -- what it's really like -- is an interesting world to be taken into. Thank goodness Maddy can take us all there without us having to go through the tightly scheduled diet with fewer foods in it than most of us have in a single meal! But the diet is only one part of this book.

Thank you so much, Maddy, for candidly sharing your story. Many will be entertained. Many will be informed. Many will be prevented from doing great harm to themselves. Many will begin to unravel the tightly knit scarf of body and food obsession they currently have wrapped around their throats. We all thank you for what you've done and what you continue to do, which is help lead the world, one person at a time, towards the more meaningful and healthy existence that lies beyond the world of physique obsession.

A small excerpt from Chapter 11:

Type fitness into Google and you get an image over and over.

Not a physical measurement of capabilities, strength, and power, but an image of a body shape.

As if fitness is a look.
Not a life.

While there are good things about "strong is the new skinny," these images completely defeat the point, and even reverse it to some extent.

The photos that normally linger behind all those fitness quotes have absolutely nothing to do with strength. These people may not be skinny, but would you believe me if I told you that they're not usually strong, either?

What if I told you that for those photo shoots, those men and women were most likely at their absolute weakest?

You most likely already know that much of advertising is a lie. Advertisers are paid millions of dollars for a reason -- you have to be good at your craft to be able to convince someone to believe whatever you want them to.

When weight lifting and body acceptance for women started to gain momentum, the media decided to use this shift to their advantage. I imagine the conversation went something like this:

"Okay, so maybe skinny is old news. Let's make strength appeal to the public (because let's be honest, that won't be too tough) . . . but let's dress it up with the same supermodel body we used for our other ads."

We'll get women with a little more muscle, but they'll be just as lean. We'll call it . . . strength. And fitness! Yeah, that sounds good."

You may absolutely love lifting weights, doing yoga. running, or rock climbing but your neighbor may really enjoy knitting, volunteering at soup kitchens and studying for her PhD. Does she deserve to feel any less worthy than those who work on their bodies in the gym?
Is one body superior to another just because it spends its time differently?
It's no secret that hurting your body day after day with rituals, diets, and obsessive weight loss goals all in the name of "fitness" isn't really fitness . . .
It's not health.
It's not body acceptance.
It's more of the same thing we're trying to avoid . . .