Maybe it's just me, but I've long had the impression that the 1936 Olympic Games provided an epochal moment in the sport of American weightlifting. Perhaps it's because a number of the faces on that year's Olympic lifting team enjoyed an amazing amount of protracted notoriety in the Iron Game, as well as the fact that they participated in the "Hitler Olympics!" In reality, though, it is just me, as the sport of Olympic weightlifting here in America began coming of age at the prior Games in Los Angeles in 1932.

"The essential thing is not conquering but fighting well."
- De Coubertin

Before getting into specifics about the actual lifting competition which was staged at the venerate Olympic Auditorium, a few facts in general about the '32 Olympics are worth noting: Very probably due to the worldwide economic depression which was engulfing the global economy of the day, as well as the fact that humanity as a whole was not that far removed from the ravages of World War I, the city of Los Angeles was the only bidder for the rights to hold the 1932 Games. In fact, many "knowledgeable" international sports insiders were pretty open about the fact that in their collective opinion the organizers must have gone mad to even bid on it as they would surely "lose their shirts."

And while prevailing conditions did cut the number of competing athletes by half as compared to the 1928 Games, contemporary newspaper accounts contend that the Los Angeles organizers easily reached "profitability", with some seemingly overly charitable reports claiming that they netted upwards of a million dollars!

As to the actual lifting competition itself, 28 athletes from eight nations vied for medals on July 30th and 31st of 1932, with France and Germany tying with three overall medals apiece. Note should be taken that the three won by France were all gold.

Likewise, American lifting got a fine "shot in the arm" by virtue of the fact that Henry Duey and Tony Terlazzo came away with bronze medals.

Against the gloomy backdrop of encroaching joblessness and the ever-widening dark business climate, the Los Angeles Olympics, along with its promise of showcasing the best athletes on the planet, provided a much needed distraction for many. Which explains why established lifting luminaries like David Willoughby and lifting luminaries in-waiting like Bob Hoffman were on the scene.

Frankly, Los Angeles was very possibly the most fitting place in America to hold an international competitive lifting event at the time. Why? The state of California in general, and L.A. in particular, were the hottest hotbeds of national competitive lifting when the Olympics blew into town. This situation, in no small part, was attributable to the Herculean organizational efforts of Willoughby, who was one of the power trio (George Jowett and Ottley Coulter were the others) who oversaw the American Continental Weightlifting Association (ACWLA), which was the sanctioning structure of competitive Olympic lifting activities here in the USA in the 1920s.

According to history, the ACWLA was formed to establish a uniform set of criteria by which the strength accomplishments of lifters could be accurately compared and rated equitably. Understand that prior to this organization's inception, America and the sporting press, such as it was, were treated to legions of performing professional strongmen professing to be "The Strongest Man in the World." Hence, true topflight, verifiable strength and power, and especially that of amateurs, was completely overlooked in favor of wild claims of questionable veracity and crass commercialism.

Enter the ACWLA which was very much patterned after the guiding policies of the British Amateur Weightlifting Association (BAWLA), which, by the way, was affiliated with the International Olympic Committee (IOC) or its counterpart of that era.

Suffice it to say that there are very interesting accounts available on the 'net which detail the byplay between Coulter, Jowett and Willoughby (especially in terms of striking a workable balance between the degrees of pure athletic idealism, desirable amount of tolerable commercialism and other objectives among them), as well as the ups and downs they encountered with established physical culture publishers like Alan Calvert, Bernard Bernard and Bernarr Macfadden in getting the ACWLA viable.

By the way, in reading some of these exceptionally detailed accounts, one gets a clear perception, warts and all, as to the state of American competitive lifting, as well as the existing mail order muscle and the physical culture magazine publishing businesses, when Bob Hoffman stepped into the field. Considerable insight about Bob and his "style" can be gleaned from these papers.

Getting back on track, in 1932 the presence of the Olympic Games here in America had to be viewed as a once-in-a-lifetime, must-see, sports spectacular of ultimate proportions. So, if you were an eligible competitor or coach, invited official, VIP type, enthused spectator, what have you, you were getting to L.A. by any means possible. In brief, that meant at your own expense for back in those days the governing committees of various sports were nowhere near as well-heeled as they are now, and could not afford to outfit and cover the expenses of their own athletes.

Undeniably, there was personal sacrifice involved for most. In the case of Bob Hoffman and some of the competing lifters, this meant a 3,000 mile cross-country car ride . . . and back home again. Comprehend this, the vehicular excursion precluded a lot of valuable last minute preparatory training, irregular meals and irregular sleeping accommodations, along with a lot of general discomfort from riding in a car hours on end.

Plus, and this I had impressed upon me by one old time York Barbell lifter, a cross country car trip back in the 1930s was more iffy due to the fact that the typical car, and especially the tires, were nowhere near as reliable as today. I was told that Bob and his traveling companions encountered disruptions with tires and engine breakdowns on both the trip to and from L.A.

One thing regarding Willoughby's announcement that he was on the verge of venturing into the commercial side of muscles drew my attention: It involved a comment Jowett made about Dave I encountered while researching the ACWLA. The former wrote to Coulter at one point complaining that Willoughby was too focused on the pursuit of idealistic adherence to rules and structure, and did not give enough consideration to the money-making side of the lifting experience. Perhaps Jowett won Willoughby over to the monetary side after all.

Come to think of it, if I have my dates straight in my head, Bob and George Jowett had established a working relationship prior to the Los Angeles Olympics. It is, therefore, conceivable that GFJ set up/initiated this meeting between Bob and David.

At the same time, Bob's reply denotes that a lot was going on in early 1933 with him and his transition from the oil burner field to the muscle business. Insights like he launched with a trio of companies - Strength and Health Publishing, York Barbell manufacturing per se and American Athletic Appliance (which I think was Jowett's suggestion to Bob), new offices were on the way, shortfall on his monthly subscription expectations, how many training sets (not Olympic) his concern had produced up to that point, and his experiences with dumbbell work.

Read and enjoy their correspondence and decide if your prior perception of each individual has changed at all. 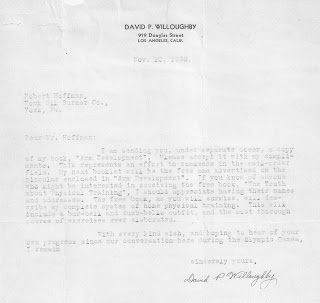 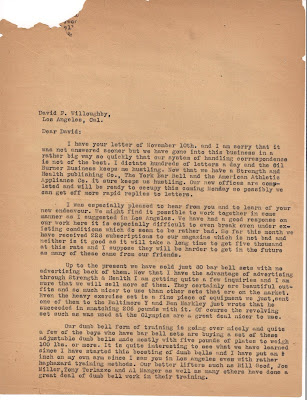