Some years ago when I was the editor in chief of Muscle Builder magazine, I interviewed Frank Zane many times. The articles he contributed to that publication were always of the highest quality in terms of both information and result-producing routines. Zane was probably the most scientific bodybuilder of his era. He kept detailed records of every workout and routine that he ever used. He was constantly analyzing every facet of his training, including his diet and sleeping habits.

Zane's philosophy was that you don't have to have 20-inch arms and weigh 250 lbs to look impressive. He contended that most men become obsessed with obtaining huge size and making bodyweight gains. While he acknowledged that a certain amount of size and bodyweight are necessary, he believed that these are not the factors that determine a top physique. He rated muscle density, shape and symmetry and how those qualities are displayed as more important than who has the largest measurements or who weighs the most in competition. The person who looks the best is the one who wins the show.

Here, in his own words, is the shoulder specialization program that helped make Frank Zane one of the most popular bodybuilders of all time. I've seen fantastic deltoids on fellows like Sergio Oliva and Larry Scott, but to me the all time champion of superior deltoid development was Don Howorth. I was awed by Don's width. Delts like that seemed preposterous, unreal -- except that they blended perfectly with his arms, chest and the sweep of his lats. It is my conviction that well-developed delts give any physique the stellar touch. 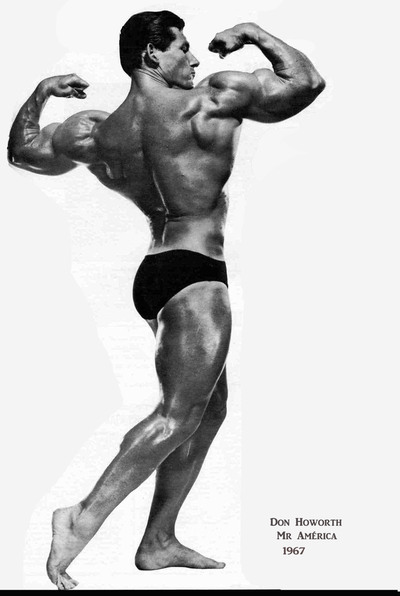 After I lost the Mr. America contest, I made a solemn vow. At any cost I would develop deltoids like those of Howorth, who shouldered me out of first place. I knew what I had to do, and I've been blasting them hard ever since, turning my defeat by a deltoid into many victories. I really believe that.

I like what my delts have given me. It took a lot of hard work and some fine-tuning of my workout program to reach my present degree of development and proportion.

I realized that if I wanted delts like Howorth's, that total development of all the parts -- front, back and middle -- I needed to use more than simple motion. Abstract contraction of muscle doesn't do it. I've seen too much failure coming from thoughtless exercise.

When I first started giving my delts priority, I was exerting tremendous effort. Each rep, each set seemed like a foreign entity, something that is tolerated for a necessary exchange. Gradually I began to feel that I was becoming one with the weight, uniting myself with it on each movement. In my opinion this is the trouble with the average bodybuilder's workout. He thinks of himself as being separate from the weights and must therefore exert a tremendous amount of effort to move a weight that he perceives as something outside of himself. That idea doesn't work for me.

Here's a tip that has paid off for me. I've learned the anatomy of each muscle, including its origins and insertions and how it functions. During workouts I close my mind to all else except the muscle I'm working. I envision it contracting and becoming pumped and growing larger with each rep. I try to think positively right through my training session, practically willing the muscles to grow.

I proved to myself that if my concentration was keen enough, I could close the breach between myself and the exercise apparatus. I riveted my attention on using proper form to the extent that no external environment existed for me. I became a part of the workout. Distractions were filtered out. You have to get into this process and work at it to experience what I mean. It transcends simple training. You feel like a baseball player who has just made the perfect swing and connected for a home run.

After experimenting with several different exercises and routines, I discovered that the following deltoid program really delivers the goods -- size, shape, muscle density and definition. I eased into it slowly and progressively intensified each workout by adding weight and shortening the rest periods. The program consists of five exercises, and I performed the first three -- dumbbell presses. lateral raises, and cable upright rows -- in tri-set fashion, one right after the another without pausing. I started fairly light and increases the poundage for each set, completing five tri-sets using the following reps and weights:

I rested about two minutes between tri-sets. Gradually I reached the point where my endurance and willpower permitted me to go through all five cycles without resting at all. Those 15 nonstop sets, performed one right after another, became a real adventure in training. The pump is intense, and the muscles burn. You start to rise above the pain, and that's when you approach UNITY, the junction of yourself and the apparatus.

The tri-set exercises primarily work the front and lateral-deltoid areas, so I followed them up with five fast sets of incline lateral raises for the posterior delts. These are bentover laterals performed while you're sitting backward on an incline bench with your chest resting against the incline. The following is typical of my sessions on this movement:

Then, to complete the program, I set the weight on the pulley machine at 20 lbs and performed five sets of one-arm pulley lateral raises for each arm without resting at all.

After I completed the full program, which totaled 25 sets, my delts were so pumped that I could barely raise my arms. The result was a remarkable increase in delt size, shape and definition in a relatively short period of time.

This is a very tough program that's much too severe for anything except pre-contest training/peaking. Don't try to jump into it immediately. Instead, I suggest the following plan for a starter.

Use this program two or three times a week, depending on your training needs and schedule. You can intensify it by performing it in superset fashion, as follows. Remember that supersetting involves performing two different exercises, alternating them without pausing to promote a greater pump stimulate muscle growth in a specific area. One superset equals one set of each of the two exercises.