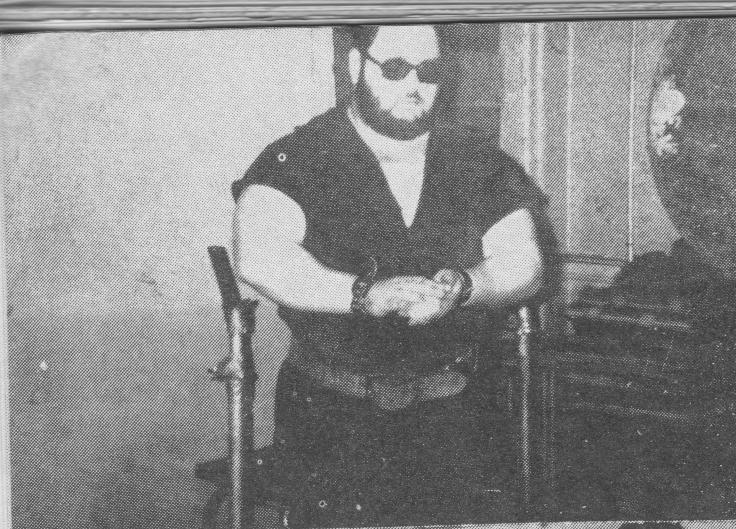 
For the purpose of bodybuilding I have worked out two very result producing routines which can be used by most fellows to the best advantage.

Routine One consists of the following exercise movements:

We shall begin the routine with the bench press because of its great popularity and also because it should be the cornerstone of any bodybuilder's routine along with the squat. A medium grip should be used and there should be no back arching during the performance. Begin with 1 set of 10 repetitions for a warm up, and then increase the weight and perform 7 reps. Increase the weight once more and now you jump to 5 reps. Keep at it with a weight you can't possibly handle for more than 5 reps, and perform 3 additional sets with this weight. When this becomes too easy, merely increase the weight for the 5 rep sets.

The press behind neck is next, and in this movement you should use a rather wide grip. The bar should be placed at just about your hairline in the back of your neck, and I would advise here the same set and repetition scheme as in the bench press, that is, 1 x 10 warmup, 1 x 7 with more weight, and finally 4 x 4-5 reps.

The next movement, the bentover barbell row, should not be performed in the power rack. It simply does not feel very comfortable using the rack and so I suggest you switch to the conventional 'free type' of movement. Just be sure that you don't revert to sloppy style because you are not using a rack. To be fully effective as a muscle building medium, the movement must be performed slowly and correctly. Don't hunch your back while pulling the weight up. Don't swing the weight up in an attempt to use more weight too soon, for this will not build your back any faster but it might give you a nasty back strain which you will not soon get over. Use a close grip, and pull the weight into the lower abdomen; it seems to activate the lats better.

The last upper body movement is the upright row. This is a very important movement for the skinny bodybuilder, for it enables him to fully work the arm muscles without having to sacrifice additional time and sweat in arm specialization. Also, it will work the back muscles and deltoids quite strongly and is certainly rewarding in that respect. The bar should be placed at crotch height and a close grip should be used. The bar should be pulled up to the height of the upper pectorals. The should be no kicking of the thighs during the operation and no hunching forward of the upper body. To fully feel and appreciate this movement, a strict performance is a training necessity. As I mentioned earlier, the same repetition scheme should be used for all the exercises in this routine.

The final movement is the parallel squat. You have never squatted if you have not squatted out of a power rack! This must be the severest type of repetition squatting in existence. First of all, you place the squat bar at parallel height. Then you squeeze yourself under the bar. You are now ready for squatting!

You will find that you can't even come close to your usual squatting poundage. This is because you usually squat from a standing erect position so that there is a slight 'rebound' at the bottom and this muscle rebound helps to overcome the hardest part of the lift, getting up with the weight when coming out of the bottom position. And I also guarantee that your legs will respond like they never have before. Additional thigh shape and size can be realized in a very short time if you are willing to work regularly and very hard. The repetition and set scheme should remain the same, and once again I urge you to try to use the heaviest weight possible for each set of required repetitions.


The Second Routine is a takeoff of the first, only we have reduced the exercise movements down to just three:

This routine can be most effectively performed on the power rack and its simplicity and its ease of operation shall save the bodybuilder much time. The rep scheme should be somewhat more severe in its scope since you are only using three movements, and by doing so you will be able to recuperate much quicker than when spending your energy on more exercises.

You should begin with 1 set of 10 reps for a warmup. Now increase the weight to a poundage you can barely handle for 6 reps. Once more increase the weight of the bar so that 3 reps are all you can possibly manage. You should try to perform 5 sets with this weight. When this is possible, you then should increase the amount of weight in each of your sets so as to keep a close watch on your up-and-coming muscular power.

After this, set the pins and the bar at the exact height of your particular sticking point and perform 3-4 sets of 3-5 reps from this position so as to force additional work on the involved muscles just where they need it the most.

You should use a medium grip in the bench press, a close grip in the bentover row, and a medium foot stance in the parallel squat. This is because you are using the power rack primarily for bodybuilding results and not merely to see how much you can possibly lift, as is the case of the powerlifter and Olympic lifter.

Let me repeat, these two routines are geared for bodybuilders, primarily the ones who are underweight. I am sure that if a weight gaining diet is followed while undertaking these routines, the trainee will produce the greatest weight gain of his entire life and his power will jump to its all time high. Such is the value of power rack training.

It goes without saying that the powerlifter and the weightlifter will gain tremendously from the correct type of training on the power rack. However, the power rack work must be of a specialized nature. For quite a long time, most fellows thought that a basic bulking routine would suffice. That is, they would use heavy weight, high sets and low reps just as in the two routines I have just outlined for the bodybuilder. However, the strength lifter requires a different training scheme.

Because he is interested in increasing mainly his three competitive lifts and cannot possibly dissipate his energies on various movements, such as incline presses, half squats and high deadlifts, which will hamper his three-lift potential.

Instead, why can't the trainee simply use the same movements but use sectional training?

For instance, Jim is a powerlifter. He uses the power rack two times per week and once a week he works up to his one rep limit on the three power lifts using the 'free' competition style. On Monday Jim performs the three power lifts on the power rack. He places the bar dead on the chest for his bench presses and he adjusts the bar to parallel position for his squats. The deadlift is performed in the usual competition style since this lift begins with the weight on the floor, hence it begins in the bottom position (the hardest part of any lift). On this training day Jim follows the 'increase the weight on the bar and decrease the repetitions performed per set' training method. His highest poundage will find him using approximately 80% of his true one rep limit.

On Wednesday Jim still continues to train on the power rack. However, on this day he will place the bar for each lift at his most difficult position, at the sticking point. He will perform 1 set of 10 reps to warm up and then jump to 1 set of about 7 reps. Then once again he jumps the weight to a 3-rep limit and finally he will perform 5 singles with a weight that is 90% of his one rep limit. By working out of the power rack and starting from his sticking points, Jim has still used his three competitive basic lifts but he has used them in a different way and hence is not bored in performing them.

On Friday, Jim will not use the power rack. He will again perform his basic three lifts but this time his workout will consist of mostly single attempts with a limit weight and possibly an attempt at a new record.

By incorporating both regular and rack training in his weekly regime, Jim does not have to worry about the rack possibly destroying his coordination or his lifting timing. Also he has used only the three main lifts which he competes in, yet the power rack has enabled him to turn the lifts into 'assistance exercises' to combat training boredom.

Using both the power rack and conventional methods for training for the three power lifts or even the two Olympic lifts should aid just about anyone in increasing his lifting or bodybuilding potential. For the bodybuilder, the rack work is most effective when combined with a bulking up period of increased caloric intake. He should make his training schedule relatively short but very, very heavy. For his particular usage the 'sliding pole' rack is best.

So, as you can plainly see, rack work will aid just about anybody. And any initial difficulties you may have when first becoming initiated into this specialized type of training will prove itself well worth the suffering when you realize that in the long run you are going to become very heavily muscled and exceptionally strong in a very short while.