Getting Under the Bar - David Webster 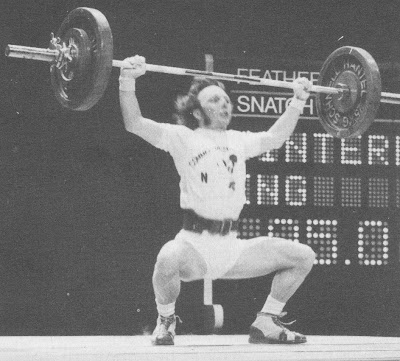 Alan Winterbourne. The unsupported phase:
Alan pulls himself quickly under the bar in the more efficient squat style. 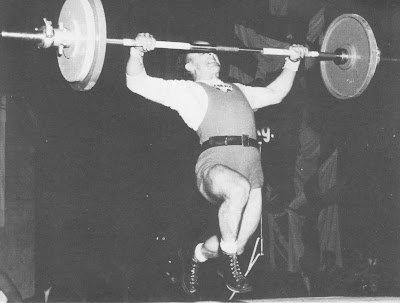 Julian Creus of Great Britain,
going under the bar in the less effective split style.


In modern lifting, getting under the bar usually means dropping into a squat rather than a split, but both styles will be covered here. As well as pulling hard with the arms, the lifter must thrust the hips down and forward under the bar. It is not enough to simply drop downwards - there must be thrust and drive, getting low as quickly as possible. The feet should be off the floor for the minimum length of time.

The actions involved at the top of the pull and in getting under the bar puts a little hook on the trajectory of the bar and the end result is largely predetermined by this; the smaller the hook (i.e., the less displacement there is to the bar) the easier it will be to reach a correct balanced low position. A big hook will mean the bar is traveling backwards; experienced lifters will know how difficult it is to hold a bar which is traveling backwards at this point. The correct finish to your pull will help eliminate this fault - that is why leg and trunk position in the pull is so important. Many coaches also stress that the elbows should be sideways as the arms bend, rather than backwards, as backwards-pointing elbows often lead to backward pulls. 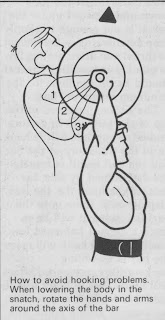 Lifters who have hooking problems should check on their hand and wrist action at this stage of the lift. The bar is heavier and less mobile than the body, and you are aiming at minimal bar displacement, so the hands and arms should rotate around the axis of the bar rather than the hands flicking/hooking the bar backwards.

The pulling up of the legs by the lifter as he 'dives' under the bar has long been taught by successful Eastern Bloc coaches. Obviously there is a need for some 'braking' after this, as the lifter sinks to the lowest position. The feet should move to slightly more than shoulder width apart and turn out to 20 to 25 degrees. if the feet are turned out more than this, the size of the base (on a forward/backward plane) will be reduced and this is most detrimental. If the feet go wider apart it will be hard to rise with the weights. Aim to have the feet land in line with the starting position but take into account that with maximum weights the feet may move back a trifle as you go into the squat. Significant backward movement of the feet indicates as inefficient backward pull.


In the most effective low position the feet move apart a little without moving backwards and the lifter gets his hips as close as possible to his heels, the knees going forwards and sideways pointing in the same direction as his toes. Squatting in a low position like this allows the lifter to sit fairly upright. The upper back and arms must be quite vertical. This is in complete contrast to the dislocation styles widely taught in America not so long ago. The theory there was that with the high bottom position the hips should be raised and the head lowered if the bar had a tendency to drop back. 'To counter the weight when caught too far forward, the hips may be lowered and the head raised.' This technique is not recommended. The low hip, vertical arm position is the one I prefer. 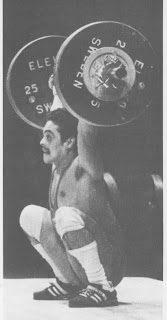 Nunez (above) and Vardanyan (below) show good low positions
in the snatch with hip and knee joints well flexed. 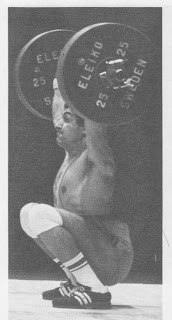 There is a school of thought which advocates going down only as low as necessary, i.e., if the weight is light you do not need to go so low, while with heavy weights you will be forced into a low position. I do not subscribe to this view. The lifter must go down faster than the bar in order that he can be in the correct position to receive it. The way to do this is to keep pulling with the arms and make a conscious effort to get your legs moving into the receiving position. To emphasize the different character of the pull and the drop under the weight, I used to advise my lifters to 'pull like a strongman and drop like a ballet dancer'. Alas, too many pull like ballet dancers and drop like strongmen.

The camel hop and high jumping styles of the past are outmoded now for the simple reason that power comes from the ground. It is the pressure exerted on the ground which gives you the drive and getting the feet back on the ground quickly after the split or squat gives you the control you need. Once again the squat cleaner has the advantage over the splitter as he has less distance to move his feet. This poses the question, 'Why move the feet at all,' which throws up the possibilities of interesting compromises to evolve a new technique, but the answer is that first the feet must be placed to allow maximum leg drive then changed to the best position in which to successfully receive the bar while in the low position. That is not the end of the story. The feet must be in the right position to produce a good recovery and bring the body upright - and this is particularly important in the heaviest cleans where every bit of leg strength is necessary. 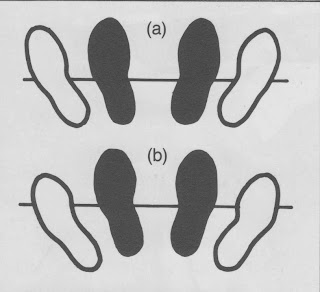 Placing the feet for the snatch.
a) Recommended position for squat style.
b) Faulty position caused by backwards pull

When Louis Martin was encountering problems in rising with maximum poundages, to try to improve the situation measurements were taken of  feet spacings in scores of his snatches, cleans, and squats. As a result of this, modifications of technique were made to give him better foot spacings for his recovery, which worked well. He eventually cleaned and recovered with more than he could jerk.

NEXT: RECOVERING WITH THE WEIGHT.