The Development of the Clean & Jerk, Part Four - David Webster

These are very significant tables. To the uninitiated, however, they will mean very little at first glance. What do figures like these tell us? They show the strong points and the weaknesses in various lifts; they show good technique or lack of it in other parts of the movement. It shows, for example, that the heavies exploit their power more than the lighter men, for the lighter men rely on getting under the bar when it is pulled to a much lower height. If the heavies employed the same technique they would probably do phenomenal records. To me these figures open new horizons in the possibilities of the clean.

Vlasov, on one lift I measured, pulled the bar some 15% higher than Zdrazila, even taking height into consideration. I am therefore sure that he could pull 500 lbs. to 90% of belt height. Furthermore his lowest position is over 13% higher than Zdrazila’s. Obviously, because of his physical makeup, he is unable to go as low as the Czech, but there is no doubt he could get lower than the present position. These two points alone reveal the 500 lb. clean is not as far away as many people imagine. Study of the statistics will reveal many other points without even seeing the lifts. Yamazaki does not go nearly low enough; the splitters, although it is possible for them to get a lower center of gravity, do not have the bar as low as the squatters. I have compared less well known lifters with these top liners and find that, like the heavies, these lesser lights, even lighter ones, pull the bar much higher than is necessary.

Notice that even with a knee touch Palinski’s split is not as low as the squatter’s, and this is one of the lowest split lifts I have ever seen.

The figures I took from dozens of films and these quoted here bear out the findings of the investigation of Loughborough College (unpublished thesis by Chapman & Jones, 1963). This thesis showed that, in the pull, splitters have to build up enough momentum to carry the bar higher than the squatters, e.g., Baszanowski 17.7; Vakhonin 17.3, while Zdrazila gets off with only a 10% increase in pulling height. Combine this with the lower receiving position obtained by squat stylists and you can see the squat undoubtedly has greater possibilities than the split. 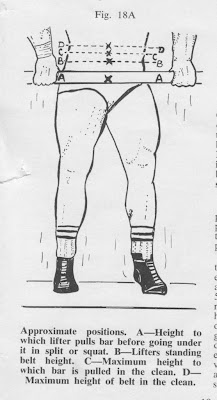 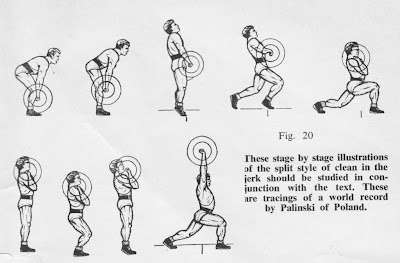 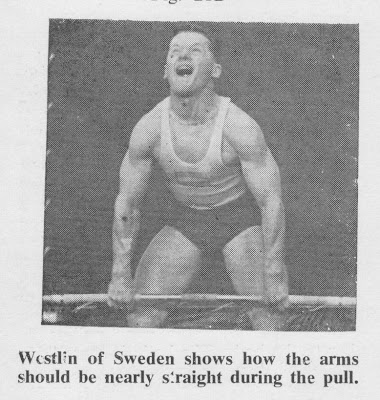 I MUST STRESS THE NECESSITY TO TRAIN YOURSELF TO BE CONFIDENT IN GOING UNDER A BAR PULLED TO A LOW HEIGHT. Certainly you must try to pull the bar with all your power, but so many people won’t go under the bar unless it is pulled to chest height. You will see that Zabotinsky pulls to 106% of standing belt height, yet Zdrazila can get under a bar pulled only to 90%. If Zab can pull 450 lbs. to 106% what can he pull to 16% less?

Of course he can’t get such a low position as Hans Zdrazila because he has such big thighs and hips, but the deductions lead me to believe that the world records will continue to fall to the men who can get under a bar pulled to a relatively low height and then get into an extremely low position.

The lessons to be learned here are that WHILE YOU MUST KEEP TRAINING VERY HARD TO INCREASE YOUR PULLING POWER, YOU MUST ALSO DO A CONSIDERABLE AMOUNT OF TRAINING GETTING FAST AND LOW UNDER WEIGHTS WHICH ARE NOT PULLED VERY HIGH.

Cleans from the hang and dead hang cleans are good providing the starting and transitory positions duplicate the movements in the actual lift. All to often we see these exercises done in a manner which is not duplicated in competitive lifting on the platform. This has two bad features – it may build up an incorrect movement pattern, and, of lesser importance, it will not have the same muscular effect.

In dead hang cleans depend on speed rather than arm pull, or you may aggravate existing faults.

The figures and the films show clearly that there is a different pull for splitters and squatters. I am not very happy about people trying to analyze by figures and statistics alone. They must have authentic illustrations or the wrong impression will be given. For example, I doubt if it is any great advantage to pull high. Although the figures would not indicate it, probably there has been incorrect summation of forces, e.g., arms brought into play too early, and also we must consider the effect of the bar dropping. If Zdrazila pulled as high as Zabotinsky the bar would sometimes be dropping around 44% of standing belt height, say around 14½ inches. Just think of it! Double bodyweight dropping this amount would take a considerable amount of arresting to say the least and would, in my opinion, be pretty taxing on some of the joints!

The vital difference in the lifters who pull very high and those who don’t is in the ARM WORK. MANY USE THEIR ARMS TOO MUCH AND TOO SOON. Use them to the maximum only AFTER the legs and body are fully extended.

The other point I must emphasize in this summary is that in mentioning a low finishing position to the clean, I speak of the lowest possible GOOD position, with knees fully bent and hips close to heels but the with back relatively upright. A lower position could no doubt be achieved if you opened your feet too wide, and also bent the back forward. This would give a very low position but an unsound one. You must aim at the lowest GOOD position.

It appears to me that the low pull and the low squat have much to commend them. The great difficulty is in getting the lifter to put maximum effort into the pull and yet move at the right time. Practice will do more than theorizing in this respect so get to work and improve your coordination and speed, as well as your power.

To get the most out of your body the muscles should be worked in the correct order. At first glance this may be considered an anatomical factor rather than a mechanical one, but there is a mechanical one to apply as well. This is the principle of SUMMATION OF FORCES.

This principle was covered in weightlifting literature for the first time in our little booklet DEFYING GRAVITY, which dealt with the two hands snatch. The rule applies equally to the Clean & Jerk.

Most lifters know that it is wrong to bend the arms at the start of the lift, but most don’t know WHY it is wrong. It is the same in many other forms of strength and power athletics. The shot putter, for instance, never starts thrusting with his arm until late in the movement.

The theory behind correct summation of forces is that the movements should be linked so that the changeover of muscle work from one group to another should be smooth and effective and this can only be done if there is some overlapping of work and muscles utilized in the correct order.

We must be a bit more specific, but before getting down to the practical application it is necessary to point out that in the theory of mechanics it does not matter whether forces (provided by the muscles in this case) are applied simultaneously or whether they are applied in succession; theoretically the end result should be the same.

In practice, however, there is a very good reason why the muscular force should be applied successively instead of simultaneously.

The body’s strongest parts are much heavier, obviously, than the weaker parts, and they are somewhat slower in movement. Timing, therefore, becomes very important in any athletic skill such as weightlifting.

The heaviest and slowest muscle groups are around the middle of the body, clustered to a large extent around the usual center of gravity. As you move outward away from this point you will note that the muscles become lighter, relatively weaker and faster. This is the sequence in which you should use the muscles to produce a correct summation of forces for the Clean & Jerk.

The hips really initiate the movement, extending the legs and maintaining the angle of the back. the movement then flows outward, both upward and downward. The back and thighs are brought into play, and so on, until finally when momentum has been built up the arms and calves are used at the completion of the pull.

So that we can continue this theory to its conclusion, you will note that in the Jerk the same sequence holds good, with the arms and calves not coming into play until the larger muscle groups have overcome inertia and produced a certain amount of momentum.

If you wish a rough guide on timing you will recall that the back should not start extending quickly until after the bar has reached knee height. Later it will be seen that the arms begin to bend just before the body is completely extended. As the body is extended and just before the lifter starts going under the bar, the arms will have bent sufficiently to bring the bar a few inches above the crotch and a few inches below the belt. I cannot be more specific than that at this juncture although a very good picture can be built up from careful study of the figures in Table 2 (the table dealing with the height to which the bar is pulled before the lifter moves under it).

Before leaving this discussion of the summation of forces, it must again be stressed that the change-over in each case must overlap slightly so that the movement of one group is NOT expended before the other group starts. It is essential, for example, that the arms begin to bend just before the final extension. In this way you will get a smooth and effective acceleration.