The Development of the Clean & Jerk, Part Five - David Webster 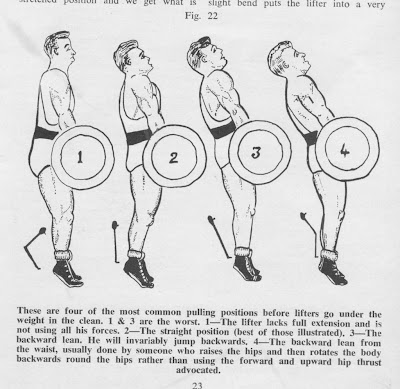 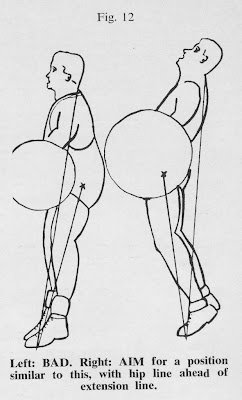 The Important Part of the Pull


Naturally all parts of the pull are important, but whereas faults in the starting position can often be fairly easily rectified, any faults occulting in the phase of the lift where the bar has passed the knees and is being pulled to its highest position will often have a disastrous effect.

In common with most officially qualified British instructors, I feel that hip action is very important at this stage. Far too few lifters have a real awareness of body position. The ‘natural’ good lifters have that certain ‘muscle sense’ which helps them to make automatic adjustments to rectify errors. He knows instinctively when he is not in the right position. While we don’t want to bother most lifters with technicalities we can teach them exactly what the various body parts do and exactly w here the bar should be at certain times. Many coaches do not have this knowledge themselves so they cannot spot errors or convey this awareness of body positions to their lifters.

As the bar is lifted from the starting position to the knees, the hips rise and generally go back slightly. From there they are thrust strongly forward and upward. Very often there is a direct forward movement or even a slight dropping of the hips just as the hip thrust commences. This is because the legs, having almost straightened, bend a little again before straightening for full extension. The hip thrust should then continue its vigorous forward and upward path and the stronger this hip drive the better the extended position is likely to be, and a better receiving position in the clean is also likely to result.

The man with the mediocre hip thrust will rarely get a full extension. This means he has cut out some muscle work in the inner and most powerful range. It also means that the bar is not pulled so high with hip, back and thigh work (although he will probably use his arms more) and therefore he will have greater difficulty in getting under it. As if that is not enough, this incomplete thrust will leave the legs in a position which will produce an entirely different thrust than the action likely to be achieved if the legs are in a more vertical position. The nearer you can get the legs to 90 degrees the better you will be able to split or squat forward under the weight. The farther away you are from 90 degrees the better you will be able to jump backward and either be behind the weight of have to pull the weight backward and perhaps then lose it behind you. The left hand illustration in Figure 12 shows the sort of position to avoid, while the lifter on the right hand side shows the sort of position which you should aim for but which I would say is impossible to achieve by a champion lifter with double-bodyweight poundages. It is shown, however, to illustrate that a line drawn from the hip hip joint (approximately) to the center of the base should be ahead of a line drawn from the neck to center of base. I term these the "line of thrust" and the "extension line" respectively. A person whose extension line (from the neck) is ahead of the line of thrust, has an incomplete extension, and without some very queer gymnastics will always, to his detriment, jump backward.

The basic factor is that you should rely on the hip thrust to get the body close to the bar, and not rely on pulling the bar to the body. The body is more "controllable" than the bar!

I now want to get back to a point I mentioned earlier. I said that the hips went forward or even dropped a little because the knees bent again.

This little-known action of the "double knee bend" has not been dealt with extensively enough by weightlifting writers so I have to comment on this movement.

After the Rome Olympics in 1960 I wrote a series of "Candid Camera" articles for Lifting News in America, the Strength Athlete in Britain and Kroppskultur in Norway. These were, I am told, the first widely read cine analysis of the great lifting champions, and when I mentioned Palinski's double knee bend I was inundated with letters asking me to elaborate on this. Later, as I did more and more analysis, I found that other lifters incorporated this maneuver and it seems to be becoming more common. This, in my opinion, is one of the finer points in lifting and should not be taught to beginners. Many of those who do it, do so unconsciously although Al Murray told me that little Namdjou, the world Bantamweight champion of 1949-50-51 deliberately cultivated this technique.

Here is what I believe happens in this movement. The knees straighten in lifting the bar to knee height. This momentarily puts the muscles which extend the hips into a stretched position and we get what is commonly known as the "stretch reflex." The most popular example of this is when you hold the arms in line with the shoulders and press them sideways and backwards as far as possible. In doing this you will find that as they reach their limit in this backward press the elastic recoil of the pectorals brings the arms forward a little bit. The same recoil action is used to some extent in the bench press and flying exercise when the weight trainer bounces out of the lowest position.

When the hips are raised in the Clean and the knees nearly straightened, the recoil action can assist in a similar fashion, but as I said, this is a finer point. Almost invariably if this is done the legs will bend a little bit at the knees. While there is one aspect of this I don not like, I must confess that it does tend to give the best of two worlds, for this slight bend puts the lifter into a very strong position where he can work the muscles of the thighs and hips in their inner range while in a very mechanically advantageous position, as the body is now almost fully extended.

It is at this stage of the lift that many acknowledged authorities recommend a second pull. They say that you must make another effort and this second pull imparts momentum to carry the bar higher.

Arthur Saxon's book "Development of Physical Power" contains the earliest reference I have read concerning this. In it he wrote "give it another pull just as it is about to commence going down again as you dip beneath it, and this final pull, which is hard to describe, should mean a good 10 or 15 pounds to you once you thoroughly master it."

I suggest coaches discard the term second pull, as it is very misleading, and instead teach the proper timing of the arm pull.