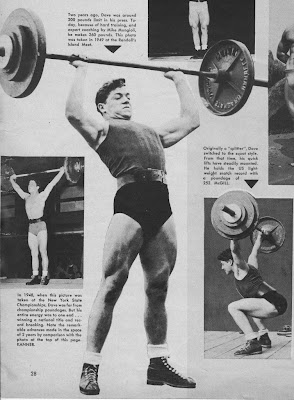 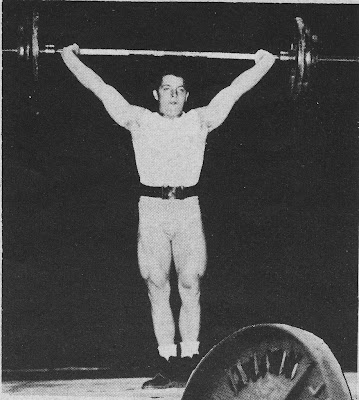 In 1947 I was present at a Metropolitan AAU Weightlifting meet in a small hall in New York City. The junior meets were being staged, and in the 132-lb. class a thin, good looking kid walked up to the bar. He was nervous, his knees trembled and he could hardly grip around the knurling. As I remember, the bar weighed 185 lbs., and the kid gave a quick pull, an amazingly fast split, and suddenly there was the weight at arms’ length overhead . . . a perfect snatch.

A year later in 1948 the same boy, as good looking as ever and now getting quite a build on him, walked up to a bar weighing 300, gave a swift heave and smacked it into the shoulders in as stylish a clean as I had ever seen. But, being just 16 years of age, his eagerness and lack of experience lost him what would have been the proud distinction of being the youngest individual to make a 300-lb. clean AND jerk . . . for he failed to recover with the bar. Young Dave Sheppard smiling then throughout his lifting . . . just as he does now . . . impressed me so much that I turned round to a prominent AAU official and remarked, “There is the future middleweight and lightheavyweight champion of the world.”

And he has entirely justified my remarks. At the Senior National AAU weightlifting championships of 1950, held at Philadelphia, Dave in the lightweight division erased a record that had stood for years . . . that belonging to the immortal Tony Terlazzo . . . when he made a great 252-lb. two hands snatch for a new national mark . . . and this year, lifting in the middleweight division, at the Senior Nationals in Los Angeles, he gave Pete George the fight of his life and actually outlifted the champ with a beautiful squat snatch of 280 lbs. Only the fact that Pete was the lighter man enabled him to retain his National title, for the totals of Pete and Dave were identical . . . 860 lbs.

Dave is no Johnny-come-lately. He was first introduced to physical culture at the early age of 12, when he started in with gymnastics. The work on parallel bars and roman rings gave him a lot of power in the arms and upper body, while the constant leaping over the High Horse packed his thighs with spring-like strength. You couldn’t say that Dave began as a weakling, for in him strength has always been present.

When he was 14 years of age, his parents bought him a set of barbells, and Dave began to train in earnest. But he had no good course of instruction to guide him. He used any old lift that he thought would build him up . . . incidentally that first time he ever touched a barbell, he pressed 125 pounds, and for nearly a year he was entirely without an organized schedule, training himself by trial and error.

When he was 15, Dave entered his first contest . . . the Junior Metropolitan Championships. He was so nervous and frightened that he almost put his clothes on and went home without lifting, but Mike Mungioli who happened to be present talked to him and more or less calmed Dave down.

It was the second time in his life that Dave had lifted on an International type bar, and his inexperience led him into many lifting indiscretions . . . for instance, he did his best lifting in the warmup room, using very heavy poundages, and leaving his strength on the warmup platform. The result was that when it came time for him to make his attempts he lifted way below his best. It says much for his potentialities that despite the fact that he had tired himself out, he won first place, yet with a total 60 pounds below his best.

And that was not all. To enter this contest he had reduced his bodyweight by 14 pounds. Those well known lifters and officials who were present liked the young, smiling, good-natured lad and gave him plenty of advice among which was the futility of taking off too much bodyweight just to enter a particular division. “Your first contest should be for experience only, Dave,” said Mike Mungioli, and Dave Sheppard learned that the best lifting . . . the kind of lifting that stamps you as a star, is done not in the warmup room but on the lifting platform itself. “The idea,” said Mike, “is not to lose your power just to get down to a certain bodyweight, but to know how much you can safely reduce without losing an ounce of your strength.”

Immediately after the contest, Dave joined the German American Athletic Club, fully recognizing his need for competent instruction. Here he worked hard on the three Olympic lifts and ended each workout with a deep knee bend session. Despite the fact that his lifting was extremely fast, he had poor style on the snatch and clean & jerk. He quickly saw that to succeed, one HAD TO specialize and in not time, Dave was using a Split Snatch style that was as good as any in the country, while his Clean & Jerk poundage climbed so steadily that he was lifting close to 100 pounds more in the jerk than he could in the snatch . . . authorities usually figure a 70-lb. difference.

When Dave moved out of Manhattan and into Astoria, he joined the famous Maspeth Weightlifting Club whose guiding genius is Mike Mungioli. Up until the time he was 18, Dave had used a split for his snatch and clean, but one day he saw Pete George lift and got quite excited over his style. Dave had occasionally used the squat style, but he had never given it a fair trial until he saw how Pete smacked those snatches overhead with an ease that made him envious. His shoulders had always been very flexible thanks to his past gymnastic work . . . and he began to feel more at home using the squat style.

When he joined the Maspeth club his training commenced in earnest. He had used deep knee bends at the German American AC, but merely to end his workouts. Now, Mike Mungioli got him using squats galore. He BEGAN his workout with squats, ENDED it with squats, and even did them DURING the workouts. Some days he did nothing but squats. But under Mike’s expert tutelage he concentrated entirely on building up POWER. He NEVER used more than 5 reps and he ALWAYS used a very heavy weight . . . in fact as much as he could handle . . . and in less than a YEAR, his limit deep knee bend jumped up 170 pounds . . . from 240 to 410. He has also performed 5 reps with 375 pounds.

Then there were the orthodox dead lifts as well as Hopper Dead Lifts, evidence of Mike’s long term correspondence with J.C. Hise. The Maspeth Club is a progressive one. It has always used what are regarded in certain quarters as “unorthodox” methods . . . you and might even call them “screwy” if we were of the same opinion. In the Maspeth Club one can find the “Hopper” and a “Power Apparatus” that helps you to handle extremely heavy poundages overhead . . . there is also a version of the Basic Power Bar . . . in fact the club members use a lot of the power methods I myself have been recommending to you in my articles.

So Dave was introduced to Hopper Dead Lifts, that wonderful exercise that teaches you to move FAST with heavy poundages. And immediately his snatch started to climb . . . steadily and surely . . . keeping pace with his improvement on the Hopper and the increasingly heavy poundages he handled. Capable of an orthodox Two Hands Dead Lift of close to 550, he has handled up to 720 lbs. on the Hopper and he NEVER USED MORE THAN FIVE REPS IN THE EXERCISE.

Dave has very decided views on weight training . . . opinions that powerfully reflect Mike Mungioli’s expert teaching. Sheppard feels that basic body power exercises are a MUST. Dead lifts, deep knee bends and heavy bench and floor presses give you the ability to stand steady under the big weights . . . and these weights don’t feel heavy . . . that’s the good arising out of the use of power movements. Power exercises do much to prevent injuries that sometimes occur in quick lifting when the athlete is inexperienced.

Dave uses the Olympic lifts and their variations in all his training, but feels that all lifters should do as he does . . . take off two or three months every year and concentrate on nothing but the basic bodybuilding exercises. “These effect considerable improvements in your actual Olympic lifting,” said Dave, “and they give you that basic power of body that spells all around strength when you return to your quick lift training.”

Dave Sheppard’s advice to the would-be Olympic lifter is sound and to the point: “Get a good coach . . . and I might add one like Mike Mungioli would fit the bill better than anyone else in the world. A good coach is one who has been through the mill and knows the whole score . . . any kid who is just entering strength athletics should do just what I would do if I was starting all over again . . . use bodybuilding exercises first, then gradually introduce weightlifting and use that more and more until you are engaging in the Olympic lifts exclusively. And remember the importance of developing basic body power.”

Dave’s balanced viewpoint is also reflected in his attitude to competition. When he first started out, he was more scared than a man chased up a dark alley by The Thing . . . now his coolness and sang-froid mark him as a real champ. “It is good to enter competition,” says Dave, “and when you’re in competition or working in the gym, you should ALWAYS give it all you’ve got . . . but the moment you are outside that gym or meet . . . forget it . . . let it ride. Some guys take it too seriously when they lose a competition or miss a lift . . . as we all do at some time . . . they receive too big a letdown and that’s bad for their future lifting psychology.”

Always a hard gym worker, Sheppard trains four and sometime five times each week. He will warm up with repetition snatching using 135 lbs. squat style and then jump to 200. From there he progresses to 215 which he uses for two reps, then he tries single attempts with 230 and 240 pounds and ups his poundage to just under his limit. If that weight goes up particularly well, then he will make a new personal record attempt. Then Dave drops back and makes several single attempts with 230. After his snatches are through, he starts to clean. He warms up with, then jumps to 300, making several attempts before he ups the poundage to 315 and finally 320. Then he goes back to 270 and makes several more single attempts.

After his cleans are through, Dave takes a rest of ten to fifteen minutes and starts on his presses. First he makes eight sets of two reps with 200 pounds, STRICT military style, commencing with an orthodox-width grip and gradually working OUT an inch at a time until the hands are wide and close to the collars. Then he works IN again using five sets of two reps.