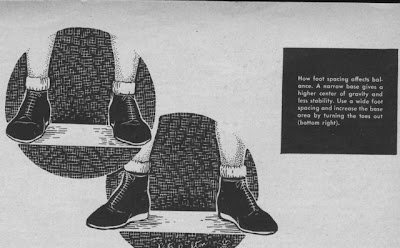 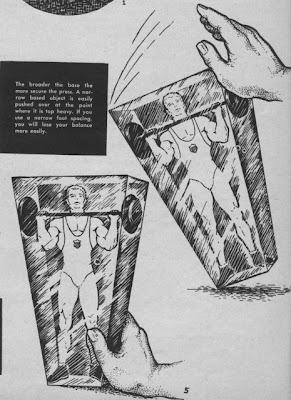 Foot Spacing and Balance
by Charles A. Smith (1952)


In an earlier chapter of this series on pressing, we saw how the width of hand spacing affects a man’s pressing poundage, and how he must determine the correct distance between the hands as they grip the bar, the one that will enable him to get the most out of his physical pressing equipment. As each of these chapters succeeds the previous one, there will be created a clearer picture of the overall requirements that make for an efficient press . . . in other words an ideal lift in which all the favorable factors are used to the greatest advantage, with every handicap overcome by an adjustment in pressing style to one suited to the lifter’s particular type of physique and skeletal structure. So, slowly, are the basic requirements for good pressing taking shape, and with this latest chapter on foot spacing and balance, two exceedingly important qualities, the picture becomes a little clearer. I would strongly urge you to save each chapter of this series. They are specially prepared so that you will experience little difficulty in learning how to press a barbell overhead, and get the utmost out of yourself.

You have been shown in other articles how more poundage in the press can be elevated, even tho you are handicapped by poor leverage and unfavorable skeletal structure, by taking a wide hand spacing with a downward-inward inclination of the forearms while using a thumbless grip. You have also been shown how good pressers use a wide grip with the forearms vertical, lats contracted and the upper arms supported on them, together with a thumbs-around-the-bar grip. Even though you know the “hand spacing laws” you must understand that there is no universal application. Each case rests on its individual merits. It should be understood that between the “naturally” endowed presser and the man who has a very hard struggle to press within 10 pounds of his own bodyweight are thousands of physical types, divided and subdivided and the man who plans his training intelligently will have to conduct experiments, apply the lessons he learns from his training, until he hits a style, a perfect personally suited pressing method.

Now we have arrived at another of those innumerable factors that go to help a man become a good presser . . . the question of foot spacing and balance . . . and both of these are directly tied up with another one – Balance of any object is directly in proportion to the width of the base and therefore the position of the object’s center of gravity. (However, don’t forget that in the pressing rules there is a limit on width of foot spacing – approximately 15¾ inches). The wider the base of an object, the lower the center of gravity, and the harder the object is to push over. A low center of gravity makes for good balance.

The width of the foot spacing is also affected by the actual size of the foot. The man with the small foot covers less “base area” and overcomes this handicap by taking a wide stance. The man with a big foot covers more base area and therefore need not take so wide a leg spread, unless he is of exceptional height. The width of the base can be increased by turning the toes out (see illustration 1).

I have previously mentioned elsewhere the theory back of the German press position. Used by practically every Teutonic lifter, its praises were sung by Rudy Ismayr and Joe Manger. Ismayr claimed that the feet together, contracted thighs and buttocks position (illustration 2) made for a much more correct pressing stance and a firm platform from which to press the weight. With this contention I heartily disagree.

To understand why the Germans used this stance, let us consider the two hands MILITARY press and its origin. The origin of the slow military type of press was in Austria, according to Professor Joseph Szalay, and it was introduced into England by Eugen Sandow who had practiced it in his native Germany. The weight was pressed from the chest in the strict parade ground stance. And as we have seen from a previous article, the weight had to be pressed slightly forward and around the face, and this often caused lifters to raise the heels or thrust the weight back to compensate for forward motion, which in turn led to other rule infractions.

As you will see from illustration 3, the body was held rigidly BUT the weight DID NOT travel along a straight line. In illustration 4, the modern pressing style, the entire body is set in a slight curve that starts from the heels, reaches the greatest part of its forward thrust at the hips and slightly above, and curves gently backwards to the top of the head. THIS STANCE WAS MADE POSSIBLE ONLY BECAUSE OF THE FACT THAT LIFTERS WERE ABLE TO PLACE THEIR FEET APART.

Just try it for yourself. Take up a feet-together position and see how far you can lean back. Then, while you are still in this position, allow the feet to spread, and you will at once see that there is MORE HIP FLEXIBILITY. And you will also observe that there is a greater difficulty in keeping a steady balance with the feet together than there is with them spread apart . . . because of the narrower base.

When you press a barbell overhead, you must remember that your center of gravity is gaining in height. While you are crouched over the bar for the clean, your “c of g” is at its lowest point. With the barbell held at the shoulders it shifts from the region of the hips to somewhere near the center of the chest and at this point you can be “shoved” very easily. As soon as you press the barbell, the center shifts up again to around the neck. The narrower the base covered by the feet, the less sure the balance of the entire body because of the higher center of gravity. Immediately a wider leg spread is assumed, the center of gravity is lowered, and the balance is more firm because of the wider base area covered.

As you well know, throughout the entire press, the barbell is constantly on the move, except for a brief pause at the shoulders while waiting for the referee’s signal to commence the press proper. Right from the moment you start the clean until you get the barbell pressed to arms’ length overhead, the problem of maintaining balance and saving time is involved; therefore it is important to see that all conditions are good . . . all the requirements for a GOOD steady press are observed BEFORE you start the lift, and you clean that weight and ram it overhead as quickly as the rules will allow.

When you get set for the clean, assume the foot spacing you will use during the press. In other words, once you stand in front of the bar for the clean, the width of leg stance should be the same that is used as the weight is pressed overhead. In the chapter concerned with cleaning the weight to the shoulders for the press, I mentioned that a short step back could be used when approaching a limit press poundage. If you use this step back for the clean, bring the foot splitting to the rear into position immediately the weight arrives into pressing position.

The very moment when the bar comes into position across the shoulders, you should be all ready to press . . . correct hand spacing and grip . . . feet in position . . . correct angle to forearms and upper arms . . . comfortable feel of the bar across the clavicles. If you have to worry about these factors AFTER you have the bar across the clavicles you are going to lower your chances of making a god press. Too much unnecessary movement after the bar has been cleaned in an attempt to settle it into pressing position is WASTED TIME, MOTION AND ENERGY, and as your pressing poundages approach your limit, so your chances lessen.

Too much shifting around when the weight has been cleaned to pressing position constantly alters the center of gravity of the lifter and makes maintenance of balance difficult. It is during this period that the lifter is liable to violate that part of the press rules that make a clean to the shoulders in one motion mandatory. And it is possible that the lifter will merit disqualification by shifting the position of the bar or hands AFTER pressing position has been assumed.

Furthermore, if a bad press position has been assumed, when the weight is pressed overhead the lifter, voluntarily or otherwise, attempts to adjust his balance (as instanced in illustration 3 where the weight is pressed forward and then back), and from this attempt to get a better or more firm position DURING THE PRESS, the heels can be raised, or the toes, and thus the lifter finds himself disqualified.

The center of gravity of the average man is in the middle of the hips around the top of the pelvic arch when he is standing upright. But a man with heavy legs and a torso that travels straight up and down is likely to have a lower center of gravity than the man who has a slim waist and very broad shoulders and chest. Thus the lifter should examine himself, impartially, appraisingly and from what his mirror tells him. He should determine the width of foot spacing and the pressing stance he will adopt for himself. A considerable change can be made by the “top heavy” athlete with the adoption of a leg spacing to the limit of the rules. Further advantage can be gained by the toes being turned out as in Illustration 1.

And do you will see that the vital question of pressing stability rests on a BROAD BASE and the position of your center of gravity. The lower your “c of g” is, the better your chances for a good, firm press. The barbell should travel along ONE STRAIGHT LINE during the press proper . . . a line that runs through the hips and the head in a gentle, slight curve, and STRAIGHT overhead from the shoulders. It is along this straight, shoulder to overhead line your bar must move.

There is greater mechanical efficiency in exercising control over the bar as it travels along this line, by BODY adjustment, than by actual movement of the BAR itself for, as previously pointed out, the higher the bar goes above the head, the higher your center of gravity becomes; and the more top-heavy you are the easier it will be to lose balance and the more difficult for you to maintain it.

If you take a top-heavy object and push it by its base, it is hard for you to turn it over onto its side. But the higher you place your hand to push, the easier it becomes to upset it, and when you get to the top of the object, that is introduce motion to the spot where it is top heavy . . . over it goes (illustration 5). THE BROADER THE BASE, THE MORE SECURE YOUR PRESS.