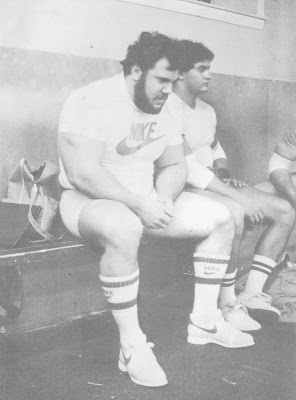 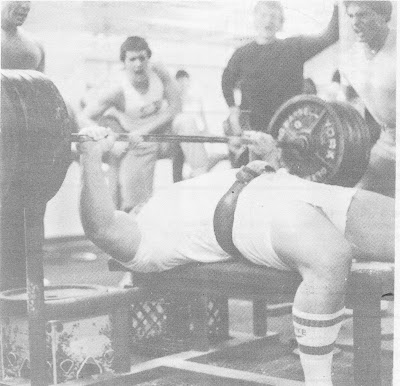 Ted Arcidi had a relatively late start in lifting and has one of the most unusual reasons for starting that I've ever heard. During February of 1978 the Boston area was hit by what was likely the most severe storm in the last hundred years. It was a blizzard driven by gale force winds that dumped over 27 inches of snow on the area in about 24 hours. It destroyed countless homes and the dollar value in property damage went well past the billion mark. During the ensuing days there was a driving ban in effect, public transportation wasn’t running and the only way to travel was on foot. With over two feet of snow on the ground, high winds and sub-freezing temperatures, a lot of people understandably developed cabin fever. To combat the boredom, Ted tried his hand at lifting weights. At the the time he was a 170-pound freshman hockey player at Salem State College. Right away he enjoyed the weights, and as he states, “It was kind of like opening up Pandora’s box for me. The developing of strength, size and power was something I hadn’t experienced before and I enjoyed it very much.”

After his freshman year at Salem State he transfered to Norwich University. Once there he had to sit out a year of hockey, so he began lifting with the football team to increase his size and strength for hockey. Despite his love for that sport, lifting took more and more of his time and gradually hockey was pushed into the background. You all know what it’s like once the iron becomes a part of you. You seem possessed by it, and instead of using lifting as a means to achieve a goal, lifting becomes the goal.

The following are Ted’s lifts leading up to his performance at the New Boston Powerlifting Contest on November 21, 1982:

His bench press cycle lasts 13-14 weeks and goes like this:

Monday, light benches. On this day he uses 150-180 pounds less than his Thursday workout which is his heavy day. By the end of his cycle he has worked up to 4 sets of 5 reps with 425 followed by 10 reps with 390, which is done for a pump set. His assistance work is never really done all out; he likes to have a 10 or 15 pound cushion on all sets. The assistance work is basically the same as listed above except on Mondays he does sets of 5 in th Press Behind Neck. Also, he generally works the assistance work a little harder during the earlier stages of his cycle. This day is finished off with a little bit of neck work.

Tuesday. He works his back by doing 4 sets of 10 with 240 pounds for lat pulldowns. He follows this with some gut work.

Thursday, heavy benches. The first four weeks of Ted’s cycle he works up to 4 sets of heavy 6’s. The next 4-5 weeks he concentrates on 4 sets of heavy 5’s. If is during these first 8-9 weeks that Ted feels he actually builds his strength base. The next 2 weeks involve 3 sets of heavy 3’s, and the last 2 weeks consist of 2 sets of heavy 3’s followed by an even heavier double with forced reps. See the previously prescribed workout for an example.) The assistance work is about the same as Monday except he does 7 reps in the Press Behind Neck and generally this assistance work is not quite as heavy as on Monday.

Friday, the same as on Monday.

Saturday. Heavy Press Behind Neck using the same rep scheme he utilizes for his bench press cycle. He worked up to 2 reps with 325 pounds two weeks before the Boston meet.


Being a relative novice (in terms of the number of years he has lifted), Ted made the comment that hs still felt like a child experimenting with his training. One of the things which he feels to be of the utmost importance is mental preparation. He feels this aspect should be worked and practiced while training. Ted feels the successful attempts at his predetermined workout poundages are of great importance both physically and mentally in gearing for his next workout or contest. Furthermore, he stated that we all have a great deal of talent within us, but the key is our unleashing of it. He expressed a great deal of admiration for lifters who are able to unlock this door. Carlton Snitkin and Joe Rizza (a fellow lifter at P&P Gym in Waltham, Mass. who has squatted 760 at 198 before being felled by a serious knee injury), were two of the many lifters that he admired for this quality.

In speaking to Ted it is hard to believe it hasn’t even been five years since he fits touched a barbell. His knowledge of training technique and theory is quite extensive and his own cycle leaves little to chance.

For instance, he feels that being tight on the bench is very important so he does neck work because the insertions of the neck muscles lie in the shoulder girdle and thus help stabilize it during the bench press.

In training, his reps on the bench are in the touch-and-go style with the speed of the descent being moderate. He is very powerful off the chest, utilizing a tremendous intitial drive. He doesn’t feel flyes or isolated chest movements arer necessary for him because his chest gets enough work with his regular bench work and the forced reps he does on his heavy day. He does, however, work his triceps with a great deal because he experiences the most difficulty in the top part of the lift.

At the present time Ted is strictly a bench press specialist, but I feel he has tremendous potential in the other lifts as well. He only squats and deadlifts between heavy bench cycles and even then he just experiments with these and other lifts. Despite this limited attention he has managed to do a 630 squat and a 650 deadlift, after only working on them for about six weeks. At 24 years of age, 5’ 10” and 272 pounds, he has an awesome future in powerlifting. Ted is unbelievably thick and powerful looking, reminding one of Mel Hennesey or possibly a larger version of Ernie Frantz.

Currently, Ted is enrolled in a pre-dental program at the University of Massachusetts. He already holds a Physical Education degree from Norwich University, and would like to enroll in dental school next fall. As far as lifting goes, Ted would like to get invited to Gus Rethwisch’s meet and either bump the 275-class record up another notch or two, or go after Kaz’s record as a superheavy. After that, and as long as school doesn’t force a change in plans, he’d like to take a shot at the 700-lb barrier. He has also expressed interest in competing in the World’s Strongest Man contest.

I expected Ted’s diet to consist of something out of the ordinary. After all, he has managed to pack 100 pounds of muscle on in less than five years. However, the most unusual aspect of his diet is that his noon meal is his largest and that his breakfast almost always consists of juice, oatmeal, and three raw eggs. He also takes what amounts to a multi-pak at breakfast. Ted tries to stay away from refined sugar, but admits to having a candy bar about every two weeks just so he can remember what chocolate tastes like.He feels refined sugar really hurts the lifter though and states that he definitely noticed the rebound hypoglycemia effect from it.

One of the things which was most apparent in my discussion with Ted was his apparent eagerness to give credit and thanks to those who have helped him out and given him support. Tops on his list were his parents and family, He also wanted me to make sure that I mentioned his fellow lifters at the P&P Gym in Waltham, and in particular Tom Wheaton, who usually lifts off and spots for Ted on the bench. In fact during the workout that I observed, as soon as Ted finished he made sure that he thanked everyone who had assisted him for their verbal and physical assistance. Without them, Ted said he wouldn’t even be able to complete his warmup sets in the gym.