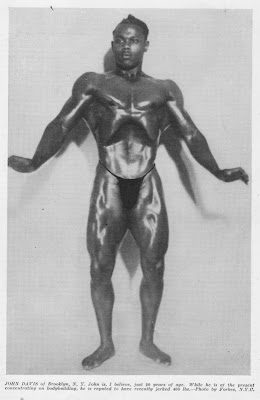 John Davis of Brooklyn, New York. John is, I believe, just 20 years of age. While he is at the present concentrating on bodybuilding, he is reputed to have recently jerked 400 lbs.

Famous Strong Men of France – Part One
by Leo Gaudreau (1940)

I feel rather honored in being requested by Mr. Gaudreau to come between him and his readers.

Being of French origin, not more than a few generations removed Ille de Re of France, Mr. Gaudreau naturally has a very strong racial feeling toward the strong men from the land of his forefathers. Not wishing to have it said that his racial feelings influenced his better judgment, I (Italian by ancestry, English by birth) was asked to give my opinion. I feel rather presumptuous coming between an author and his readers, but I have no alternative.

Leo Gaudreau, who started his career as a physical culture writer on the internationally famous and vigorous “Police Gazette” (now defunct), has collected these many years a wealth of information which I in the past, while in America, have been privileged to examine. The romance of the “iron-game” is at his fingertips.

Nearly every nation has produced many exceptional strong men, but I believe that France has produced strong men in unequalled numbers and quality. This statement may sound slightly hyperbolic when we consider the countries that produced Saxon, Hackenschmidt, Swoboda, and their contemporaries. However, the fact is, the English-speaking world has never been given sufficient information regarding these French monarchs of strength, and so, what is more fitting than (and here I take the liberty of long friendship) that a “froggy” should conduct this journey into the lives of Famous Strong Men of France.

I predict that the result will convince you that France has been, in spite of its reputation for frivolity, the cradle of strong men.

Several generations in North America have not entirely eliminated from me a feeling of racial pride in the land of my lineal descent. What is more natural then, than that this feeling of pride should be directed to the men of superlative strength who were cradled in France.

“Famous Strong Men of France” is not written in a spirit inimical to strong men of other nations, for your correspondent’s love of strength knows no race or color. Rather, I wish to gain appreciation for these French champions from the English-speaking world which has never been advised of the true worth of such men as Bonnes, Batta, Poiree, Maspoli, and others.

Before introducing the various strength artistes something not realized by many of our younger readers must be explained.

In France, in the period in which the characters in this story existed, very few men performed a snatch other than merely to throw the weight to arms’ length without splitting the feet or dipping under the weight. Except for the two-arm jerk and the push or press, the bar bell was used for little else. Two-arm jerking was merely a bit of heave and push, and pulling the bar into the shoulders other than in one clean motion was frowned upon; resting the bar (or the elbows) on the body preparatory to jerking overhead was taboo. Both were referred to as “incorrect lifting.” Bent pressing was alluded to as “the German Method” and naturally came under the head of “incorrect lifting.”

If their ethics caused their poundages (in certain lifts) to suffer in comparison with other Continental strong men, it at least served to promote great strength. Their snatches, so-called, low in poundages as they were because of their method of performance, suffered nothing in comparison with other nations since the one-hand snatch is as French as the bent press is German.

Two other lifts popular in this period were holding out weights at arms’ length sideways, and jerking with two dumb-bells. I dare say (and now I am relying on memory) the records on these two lifts compare favorably with those of present-day standards.

Around 1885 men capable of a single-handed snatch of 150 lbs. were very few and looked upon as rare specimens. Try snatching some solid, badly constructed bar bell or dumbbell in the style they used and you will marvel at their strength. Pietro Dalmasso could snatch 152 lbs., he was exceptional, but he used a bit of a dip. In 1884 Pietro smashed 142 lbs. single-handed, and on the same occasion the very powerful Raulin Jeuné snatched 140 lbs. with no split or dip.

Around 1910 (relying on memory for the year) a one-hand snatch of 197 lbs. (performed scientifically) by Maurice De Riaz was considered the world’s professional record. A far cry from Rigoulot’s one-hand snatch of 264 lbs. in 1933 at the peak of his weightlifting career. Even in 1937 Rigoulot, out of training, is reputed to have snatched, without warming up and fully dressed, 198 lbs. for the benefit of the “visiting firemen.” However, De Riaz in many ways can be considered (as he was in his heyday) Rigoulot’s equal in strength.

In 1897 John Grunn, an extremely powerful man, had no more than 165 lbs. to his credit on the one-hand snatch. However, Grunn could do things with thick-handled weights that would baffle present-day strong men. In 1885 Charles Batta, one of France’s greatest among the old-timers, had a 150 lb. snatch to be proud of. Batta was versatile though his hand strength, as you will learn, remains unequalled.

Up to 1887 in France the best two-arm continental clean & jerk was 266 lbs. by a Rumanian strong man, George San Marin, an athlete of elegant and classical physique.

In 1897 Noel le Gaulois won the world’s championship in Brussels with a two-arm jerk of 253 lbs.; one-hand snatch 143 lbs. and a two-hand snatch of 220 lbs. Noel was nevertheless a powerful man.

It would be unfair to say that many of us can do as much, and more; consider the clumsy and solid weights they used, the conditions they imposed on themselves and the lack of scientific knowledge of present-day lifting; a style of lifting, by the way, which certain old-timers in France refer to as an acrobatic feat.

The foregoing explanation is necessary for you to understand what may seem to be low poundages of many powerful old-timers. Although it is incidental to the title of my story, I hope it has proved interesting and informative.

Human nature is prone to establish a value on a public figure as long as the entertainment abilities of that figure are virile; once that figure starts to decline, public fancy is cruel and the pleasure he afforded us and our interest in him diminishes until he is but a dim memory and laid under the sod alone and forgotten.

Nearly five years ago I received the news that Charles Poiree, famous French strong man, had died. Poiree (pronounced Pwahray), strong man extraordinaire, athlete of superb development, was in his heyday over 40 years ago.

Charles Poiree, known to many as “Bibi”, was one of France’s outstanding strength athletes. He was designated as “le plus beau bras de France” – or translated in English, where it loses much of its apt meaning, “the most beautiful arm in France.”

Around 1897 he was considered the world’s record holder of one-arm swinging, pressing and holding out weights sideways. His best lifts are a left-hand dumbbell press of 120 lbs. with right arm held out horizontally. He could swing and snatch 165 lbs. with the left hand and hold out sideways correctly 77 lbs. on the palm of his hand or 55 lbs. held by a ring. His best two-arm clean & jerk was 264 lbs. and his two-hand press was 220 lbs. He could two-arm snatch 200 lbs. with no leg dip. These lifts were considered absolutely “tops” at that period and this French athlete’s records existed until they were broken by none other than the great Bonnes.

After seeing him snatch a famous bar of 163 lbs. with the left hand at a French society in Lile, Leon Lee was of the opinion that Poiree could have snatched 190 lbs. with the proper training.

At a height of 5’ 9” Poiree weighed 200 lbs. He possessed a 48” chest and 34½” waist. His neck measured 17¼” and his beautifully molded and impressive arms measured 17½” biceps and 14” forearm. At 45 years of age his arms still maintained their muscularity. At 65 years of age he could perform a holdout with 45 lb. ring weights. He was the preferred model for Dr. Paul Richer for whom he posed many years. His photos form an important part of Dr. Richer’s “Physiologie Artistique.”