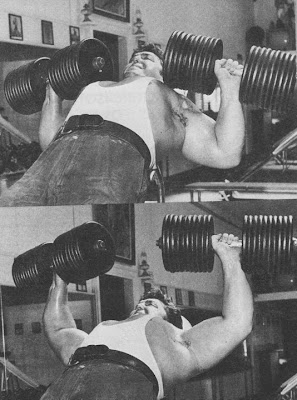 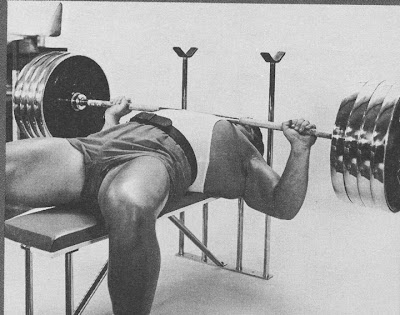 
Strength is something that has fascinated me ever since I was old enough to realize that some people are stronger than others. Even as a young boy I can remember trying to pick up heavy objects just to see if I could do it. This is probably a normal thing to do because most youngsters admire strength. Yet, this is something that I have never seemed to outgrow. I still admire strong men and have always trained with the intention of becoming stronger than anyone right from my first workout, which was over eight years ago.

I started training when I was 15 years old and weighed around 180 pounds at the time. While in high school my goal was to do a bench press of 400 pounds or more before I graduated. During my senior year at Washington High School in Los Angeles, at the age of 17, I was approximately 40 pounds heavier in bodyweight and was able to do a strict bench press with 420 pounds and this with a two-second pause at the chest. Previously I felt that if I could do a 400 pound bench press I would be well satisfied. But now I find myself changing my goals and striving for higher poundages. I wanted to bench press 500 pounds before I was 20 years old. Again I reached this goal. In my mind I hoped that some day I could become the world’s champion bench presser, and this is the goal I’m working towards now.

During my career I have collected much material on the exceptionally strong men in the weight field and have studied and pondered their training programs in an effort to extract anything that I felt would benefit me. In this category were: Marvin Eder, John Grimek, Buster McShane, Doug Hepburn and Paul Anderson, just to name a few, all of whom have been a great deal of help to me in reaching my goal. Personally I feel that Marvin Eder was one of the strongest men, pound for pound, I had ever heard about for overall strength. In fact I tried to fashion my early training after his. Also, I always admired Doug Hepburn, who actually was not a big man at the beginning of his weight lifting career (weighing approximately 160 pounds), nor was he any stronger than the average person. But because of his tremendous drive he was able to add well over 100 pounds of bodyweight to his frame and became one of the strongest men in the world. Anyone who can take 500 pounds off the rack and press it overhead has to be strong!

Buster McShane, a lifter from Belfast, Ireland, has been the British Empire 165 pound weightlifting champion a number of times. He also has done an official bench press of 450 pounds at this bodyweight. We corresponded for several years, passing information back and forth that we felt would benefit one another in improving our bench press.

Little has to be said as to why I admire John Grimek. I don’t know of any bodybuilder who has not had Grimek as his idol. Here is a man who has held numerous weightlifting titles and a physique that is ideal. He not only has the physique that is Herculean in appearance but has the basic power to back it. I have talked to many of the top physique stars and they all seem to agree that John has done more for bodybuilding than any other person, and has set many of the standards that we follow today.

Paul Anderson has always been admired by me because of his exceptional strength and the way he can toy with such tremendous weights. This always amazed me. I find it hard to believe that anyone can do a full squat with 1100 pounds, when my back nearly breaks under 600 pounds. He has given all of us power lifters many goals to shoot towards.

Last July I set an unofficial world’s record in the bench press with 541 pounds at San Pedro, California. My official world record was 530 pounds. This was made in Pasadena, California during 1963. My goals have changed again, however. I am now shooting for a 600 pound bench press and I am confident that I can do it with the training program I am following.

In the past few years I have changed my training program many times with the idea of finding ways to increase my power in this lift. Lately I have confined most of my training to four different exercises, and these four seem to help me more than all the others I used to employ in the past. These exercises are: (1) the incline press with dumbbells, (2) parallel bar dips, (3) triceps press on a flat bench, and (4) the regular bench press. I have achieved maximum gains in the bench press while using these exercises. In my own case I use very heavy weights, low repetitions and repeat each exercise in several sets. I have listed all this in the routine which you will find below.

The following is the training routine I highly recommend to anyone who wants to increase his bench pressing ability. I would not recommend adding it to your present training routine. It should be done as a separate, specialized training program for best results. Of course if you follow it as suggested you’ll readily understand why other exercises could not be used effectively. But to become a really good bench presser you have to concentrate on bench pressing and those exercises that favor this lift.

Chins, rowing movements and curls may be added to this routine if you feel you have enough energy and want to do more exercises. However, squatting should be cut down to about 10 sets a week. To be effective squats should be done on alternate training days, and should not be included with your upper body routine when you’re working for bench pressing power. Six to eight repetitions should be enough for each set.

Alternate 5 sets of Triceps Presses with 5 sets of Dips for 5 reps of each.


About once a month a limit bench press should be tried. This should be done on a Saturday. The week that you plan to go to the limit on the bench press there are several things that you should follow:

(1) Avoid doing any squats that week and cut your regular upper body exercise routine in half.

(2) Try to rest as much as possible during this week. I recommend that you get about 10 hours of sleep each night. If this is impossible, get as much rest as you can but not less than eight hours.

(3) You should cut down on all starchy foods, but eat plenty of meats, eggs, vegetables and lots of milk. It’s also a good idea to include a complete vitamin/mineral supplement daily.


If the training routine is followed faithfully for at least three months I am sure that any advanced bodybuilder can add as much as 150 pounds to his to his present bench press record. A beginner, who has not approached his limit, can probably gain much more.

This training schedule may not seem like a lot of training to some, but let me assure you that if you work hard and use maximum poundages in your exercises you should realize good progress. You must, of course, have the drive, the ambition to excel in the lift if you want to do a heavy, record poundage. And once you get interested in the lift you’ll be willing to train hard to reach the goal you have set for yourself.

In conclusion let me say that it is very helpful to keep a good frame of mind during your training. Don’t get discouraged if the weights feel extra heavy, just do the best you can under the circumstances. There will be days when the weights will feel lighter and then you should train harder. Everybody runs into such training days. Continue training and you will be able to bench press more than you ever dreamed you could. Here’s wishing you succeed in reaching your goal. I know you can do it, but you got to work for it – GOOD LUCK!