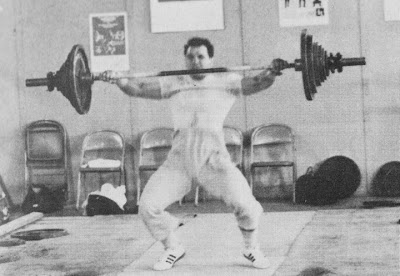 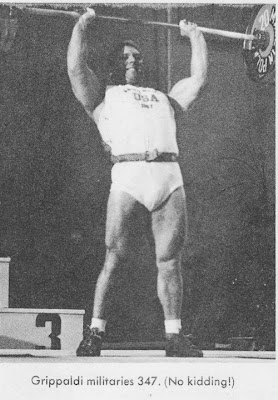 The ABC's of Weightlifting, Part Two
by Tommy Kono (1969)

This month we cover two of the three commonest errors made in the “pull” section of the Olympic lifts. The two errors are related somewhat not only because they appear in “lifting” the weight up for the Snatch or Clean (not Power Clean), but because the correct lifting action flows from one position to the next. Obviously, if you start a lift incorrectly, there is little chance of correcting the errors as the lift progresses.


Detailed Explanation of the Incorrect and Correct Method

The Initial Pull:
When an inexperienced lifter attempts to lift a barbell to the chest from the floor he invariably starts the pull with bent arms. The hips are held high because they are unaccustomed to employ their legs to start the pull. When the weights become heavier still, added to the above mistakes, they also tend to round their backs or hunch over since this is the strongest starting position for them. In effect, they employ the muscles which they have been most accustomed to using during their daily life. Some of the more advanced lifters fall into this habit too when going extremely heavy or trying for record lifts. I know of one West Coast middleweight who lifted using this technique and his best Clean & Jerk was about 315. The heavier the weight became the more he used to lean forward and flex his arms just prior to the start of the pull. This same middleweight, with some expert coaching from his dad and others, corrected this mistake and in combination with his improved training methods was able to SNATCH 325 using straps as a lightheavyweight 2½ years later.

(1) The body or head “jars” before the weight leaves the floor because either the back bows more or the arms straighten out a little causing the body to change position without the bar being lifted. A more vivid example to explain this action would be that of a person who tugs on a slack rope which is attached to a stalled car. The rope will whip taut in taking up the slack and he would “jar” but the car will not move. Another good example to remember would be the story about the man who had a stalled car and needed a push to get it started. A woman driver came by and asked if she could help. The man told her that he needed a push but since his car has an automatic transmission he would have to be pushed up to 40 miles-per-hour before it would start. The accommodating woman reared her car back for about one hundred feet and then came at him from behind trying to build her car speed up to 40 mph.

Pulling the weight is very similar to this. You cannot exert everything you have at the very beginning of the pull.

(2) By exerting maximum pull at the start of the lift you dissipate all your force to overcome the gravitational pull on the barbell and would have nothing left for the second and more important part of the pull.


Now, to the approximate correct starting position, and I say “approximate” because it depends on a person’s height and body structure in regard to how high the hips will be in relation to the shoulders. A lifter may start with his shoulders well over the bar but when the weight actually begins to leave the platform the shoulders would be right above or even slightly behind the bar. The lower back is held rigidly straight or even arched in. THE IDEA BEHIND THE INITIAL PULL SHOULD NOT BE THE MOTION OF PULLING BUT THE ACT OF SEPARATING THE BAR FROM THE PLATFORM. If you concentrate on the principle of creating more distance between the platform and the bar your back will retain its position without hunching nor will you tend to flex your arms so quickly: hence achieving a smooth and accelerated pull. THE INITIAL PULL SERVES ONLY TO PLACE THE BODY AND BAR INTO THE STRONGEST POSITION FOR THE SECOND PULL.

There is very little difference between most correct and incorrect positions but the effect of the minor differences makes a great deal of difference in the final result. In both cases the bar is fixed at knee height but the positions vary only by the placement of the shoulders.

When a lifter is positioned with his shoulders right above the bar, because the balance of the body is more in the middle of the feet, the lifter has a tendency of straightening his body backward; i.e., the shoulders go backward, using the hips as the pivoting point. The shoulders-over-bar position also prevents you from using your legs forcefully to extend the body upward. The end result is that the bar is pulled backwards and the lifter must jump back to catch the weight at either shoulder height or overhead, depending on whether he is cleaning or snatching the weight. A point to remember is that the more you jump back the less height you will have in the pull for you dissipate the pulling or height force by giving in to the jumping back or horizontal force.


There are two key positions in achieving maximum pull (in the next installment the other position will be discussed). When the bar is at the knees the shoulders should be well forward of the bar, so much so, that the balance of the body is on the balls of the feet. An inch or so above this bar-at-knees position brings your body into the best body position possible to get the combined maximum explosive force of your back, trapezius, legs and calves. This shoulders-well-beyond-the-bar position prevents you from pulling the bar backwards. On the contrary, instead of the shoulders pivoting backwards around the hips, the hips will now swing forward and upward when you attempt to extend the body and, at the same time, the shoulders will travel up instead of toward the rear.

Faults:
Back is bowed.
Arms are slightly flexed.
Trapezius muscles are contracted.

Corrections:
Back is flat or even arched in (chest held high).
Arms are straight and taut.
Trapezius muscles are taut.

Faults:
Shoulders are directly above the bar.
Hips are too far back.
Body balance centered over the feet or towards the heels.

Corrections:
Shoulders well ahead of the bar.
Hips ready to drive forward and up.
Body balance on the balls of the feet.


Next – continuing with the pull.