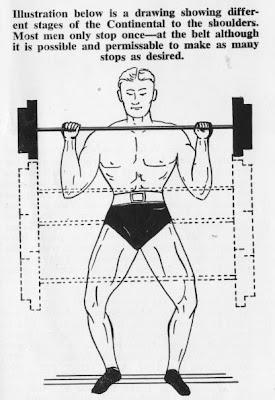 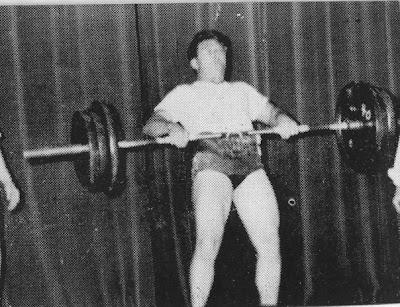 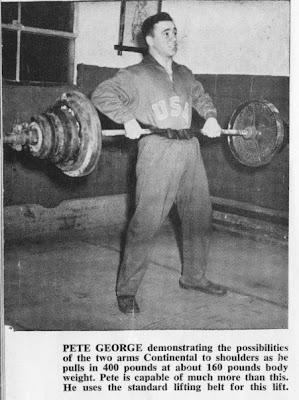 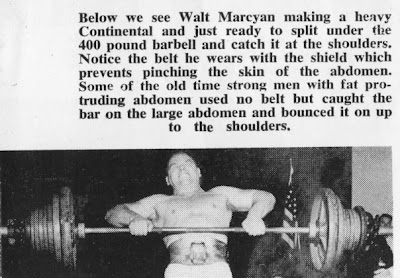 We might also mention that a man can usually jerk more if less energy is expended on getting the weight to the shoulders. The measure of a man’s strength in the early days of the lifting game was the poundage he could elevate above his head in any manner. This took many forms, but the most popular method was the Continental to the shoulders and then the jerk from there. Bringing the weight to the shoulders in this manner received its name because it was the most popular method on the continent of Europe. Some of the countries over there used this style for some time after others adopted the clean method as being the more athletic style. They argued that since a man could lift more by this method that it was more truly a “strong man’s style.” There was much truth in this argument but the clean enthusiasts gradually won their point and this style was adopted for international competition.

The continental style to shoulders is still used extensively and is not only the best way to get the maximum amount of weight to the shoulders, but it is also one of the finest back, arm, shoulder and leg exercises. It trains the muscles to handle heavy poundages. In spite of what some coaches who have not tried it may tell you, it is a valuable training exercise for quick lifters, as it develops great pulling power for the clean and snatch. Your regular lifting poundages for the regular lifts will feel lighter after training on the continental for a time. Body builders will find that it gives them rugged development as none of their other exercises can.

No accurate record of this lift has been kept but Walt Marcyan can pull 400 or more to the shoulders most any time. Leo Stern and Harold Zinkin hoist around 400. We have no idea what John Davis could do in this lift and doubt if he has ever really tried himself out on it. His top now with a good belt should be around 460, we would judge. This, of course, should represent either his limit or that of other lifters because none of them have trained or competed seriously on it. We would say that 500 lbs. should not be beyond possibility. All the men mentioned have used the two movement method of pulling the weight to the belt then tossing it to the shoulders. A more lenient method was much used by European strong men in which several movements were made starting about halfway up the thighs, then to the bend of the thighs, then to the belt, then to the lower chest and then on to the shoulders. The bar sometimes rolled or dragged over the last lap of the lift. This would enable any lifter to bring a still greater poundage to the shoulders. This is real work, though, and some times you may lose a little skin if you are lifting bare.

This brings up another point. It is always suggested that the lifter wear at least a T-shirt and better still a sweatshirt. This makes the lift more pleasant if you are going to do an rolling or sliding of the bar.

Pete George, weighing about 160, can easily bring 400 to the shoulders in two movements and we believe that he might possibly do 450 with practice at it. He is shown lifting the former poundage for the camera in the accompanying photo. Tony Terlazzo is also shown lifting in the Professional Championships last year. You will note that he has stuffed a towel behind his belt to keep it from pinching the skin on his abdomen. This is a good precaution but we fell that a towel is a bit too bulky. However, Tony could have cleaned the 300 shown if he had wished to, so did not need much concentration on the Continental but just used it to save his strength.

You will notice that all these fellows use a heavy belt with a large buckle on which they catch and rest the bar. This belt should be very strong and of heavy leather if you wish to lift maximum poundages. This lift used to be a favorite of mine, probably because I lifted around 350 the first time I tried it and since I could do so well at it naturally I liked it. It gives one quite a thrill to hoist around 400 lbs. to the shoulders in any manner. I made a lifting belt from an old threshing machine belt which I bolted together in front. This made a strong, stiff belt with which to lift although it was slow to put on and take off. If you will look at the photo of Walt Marcyan pulling in 400 lbs. to the shoulders you will see the type of belt he has constructed for this lift and which most of the fellows out there use. This belt is simply a heavy lifting belt turned around so the wide part is in front and then instead of a buckle to catch the weight on he inserts into prepared pockets in the leather a U-shaped rod with the closed end bent out to from a ledge on which the bar is caught. The wide part of the belt acts as a shield for the bar to strike on and prevents the skin of the abdomen from being pinched between the bar and the belt or buckle as was the case with a regular belt.

Now we shall give you a few details of performance to enable you to lift the greatest poundage.

Most of you may find it wise to learn to use the hook grip – that is, wrap the fingers around the thumb as far as you can. This binds the thumb to the bar and makes an unbreakable grip. Take a strong lifting position as if you were going to do a heavy dead lift – with hips down, head up, feet a comfortable distance apart and hands in about the same position you would use for a clean.

Make your pull as you would for a clean. If you are using maximum poundages or if you are rather slow of movement the bar may come to rest in a dead lift position. The you can bend the legs slightly and rest the bar on them and then pull it to the bend of the legs, then with a heave of the legs toss it up and catch it at the belt. After you heave the weight do a slight squat under it to catch it on the belt. Then with another heave and a squat, catch it at the shoulders. Possibly it will go only to the lower chest where you can catch it by arching the chest and abdomen forward. Then another slight heave will enable you to catch it at the shoulders. This is the multiple heave method and was used much by fat European lifters because their protruding abdomen would not allow the bar to pass in one movement.

Present day lifters usually use a faster method that is equally as active a style as the clean. This is the method we prefer and the one we recommend.

In this method you make an all out pull the first time, pulling the bar as high as you possibly can – which won’t be very high with a heavy weight – and then like a flash drop under the bar and arch forward slightly, much as you would in a correct clean, so as to catch the weight on the belt and behind the buckle. Most men of the present day split under the weight. You will not need to go into a full split nor is this recommended as you would never be able to get back up with the high poundages you will be lifting. Getting the weight to the belt is usually the easy part of the lift although at times a man may have to heave it from the bend of legs to belt. As soon as you come erect, place the feet firmly in line is a strong position and give another mighty heave and a terrific pull with the arms. This arm pull is important as it helps a lot. This will throw the weight up. Always heave the weight so that it will go straight up or slightly back if possible as it will be impossible to catch and hold it if you throw it forwards. Arch the back and throw the chest forward and catch the weight at the shoulders. Concentrate on a firm locked position at the shoulders because it will be impossible to hold a heavy weight if it hangs on the arms. In making a split for this catch at the shoulders you may find it wise to step slightly forward under the weight. Make such moves carefully calculated ones however, as you are handling heavy weights and a wrong and unwise move can result in a strained muscle. You will find that you can give a really explosive drive to the weight from a good belt so that the weight literally shoots up to the shoulders. Flashing speed is just as important in this style as it is in the clean if not more so. This heavy weight starts back down very quickly if you don’t get under it at once or quicker. Every move must be very determined and decisive. We say this because some men will develop a complex of fear, perhaps unconsciously, because of the unaccustomed heavy poundage they are bringing to the shoulders.

After you get the weight to the shoulders and return to the erect position you are ready for the jerk. Or if you are just working on the continental to shoulders hold it at the shoulders for a time and jump it up and down. This will develop drive and sustaining power in the entire body.

Lowering the weight should be given some thought. This can be done by first lowering it to the belt by a direct drop or by sliding it down the chest and abdomen if you have a sweat shirt on. Never drop it all the way to the floor as it is too much weight to handle in this manner and may result in a pulled muscle. After it reaches the belt then jump it off the belt to the bend of thighs then lower to floor.

You will find that a few repetitions of this will give you a real workout. You should not use over 6 repetitions per set of this for either bodybuilding or lifting power. Two or three sets will be plenty for most of you. Take it easy to start with. Learn the positions well first and accustom yourself to the lift before hitting the heavy poundages. While most fellows of today use the split you will also find the squat, sort of a half squat while leaning back, will be a very strong position.

Like most lifts, the best training you can do for this lift is practice of the lift itself, if you have already built a strong powerful physique, of course. Valuable exercises for preparing the body for this lift are the squat and the dead hand dead lift.