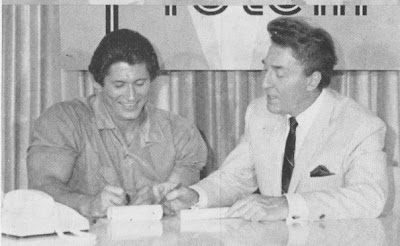 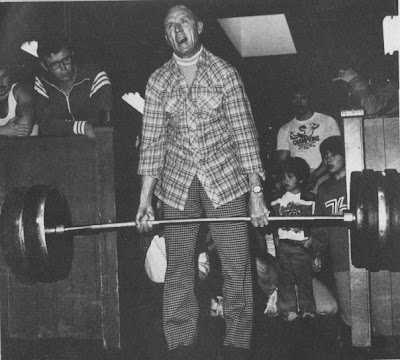 Roy Mason doing a three-finger deadlift with 490 lbs.
at 64 years of age. 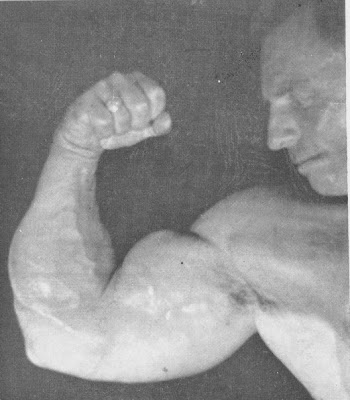 
A friend of mine, not long ago, was stuck for two months at 218 lbs. bodyweight and a 205 lb. bench press. Try as he might, he just couldn’t seem to make any headway with his limit attempt. His training partner, who weighed 30 lbs. less than he, outbenched him by 49 lbs. So, as a last resort, Tom came to me for help. I managed to put together a program which increased his prone by 65 lbs. in five months. It also enabled him to gain 30 lbs. and most of this was pure muscle.

I had Tom start each workout with the behind the neck press. At first this may seem incorrect, for it would appear as a waste of energy to perform this exercise first when the program was to be for bench pressing specialization, but I found through my own experience that after any type of overhead pressing my own prones would go up much smoother and easier. This was probably because of a more complete warmup of the involved pressing muscles. So, Tom started the behind neck presses with 115 lbs. and continued in 20 lb. jumps until he hit 175, which, at the beginning, using a cheating style, was his one rep limit. He then went into his bench presses and started with 155 and proceeded 3 reps per set using 10 lb. jumps, ending with 3 singles with 205.

The bentover row came next. In this exercise Tom used two types of performance. First, starting with 135 for 3 strict reps, increasing the poundage until his final set of 3 reps with 175 was reached. Then he went on in 10 lb. jumps from 185 to 225 using a looser, cheating style. I felt that inadvertently, a strong upper and lower back would be very valuable when executing a limit prone. Tom would then go back to the power rack and perform 2 sets of 10 reps in the press behind neck, for a finishing pump. This he also did with the prones and rows.

The only change in diet was the inclusion of one extra quart of milk in the morning and another before bed, bringing his daily total to five quarts.

The results which followed are truly amazing. Approximately five months Tommy pressed 205 off the back of his neck and proned and rowed with 270 in a pretty strict style. I am sure this routine, when followed diligently and combined with an abundant diet, can bring great improvement in one’s pressing power.