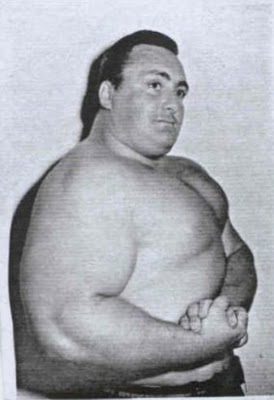 
On the 24th of April, 1954, I interviewed my friend Doug Hepburn and asked him some of the most frequently asked questions concerning himself and his training. Some of the opinions Doug voiced may surprise and even shock the gentle reader, so please bear in mind that these are the opinions of Doug Hepburn and not necessarily those of the writer or this magazine. I am using the Q & A format, quoting Doug directly.

Q: How about a few vital statistics, Doug?

Q: What is your present diet?

A: I adhere to no set schedule . . . I eat when I feel like it. In the case of a man competing with heavyweight lifters in an area where they weigh up to 300 lbs. and over, he must force-feed himself to get and maintain this needed bodyweight. Forced food intake is not a healthy thing, but there is no moderation for a competing man. Extra weight around the midsection acts a support in pressing by giving better leverage and acts also as a cushion in squatting . . . A strongman should be 5’10” tall and have a “squat-like” build like Paul Anderson. (Doug went on to say that he eats large quantities of protein supplement to retain his heavy bodyweight because “it’s easier assimilated than other foods.”

Q: Who is the best lifter?

A: Pound for pound Tommy Kono is the best lifter. A number of Russian lifters in the lighter divisions are very outstanding. The most efficient lifter, I think, is Norbert Schemansky. I have great respect for men lifting such enormous poundages at such a bodyweight. Marvin Eder is a very strong young man, especially in the pressing department, and should do well in the three lifts if he can get amateur standing.

Q: Can you give some hints to would-be strongmen?
(This question led to several other topics and his principal comments are quoted here.)

A: I must see a man try . . . train for six months before I would help him . . . he must have the drive. It is harder to be a lifter than a bodybuilder . . . lifting is purely masculine whereas bodybuilding entails feminine traits. Bodybuilders remind me of a woman getting ready to go somewhere. Can you tell me that greasing your body up and posing in front of a mirror is masculine? A bodybuilder puts strength secondary to his physique, whereas the lifter puts strength foremost because it is more masculine to do so. The reason bodybuilding is on the upward trend is that the opposite sex have more and more influence over the males. Women do not like the large waistline necessary for the weightlifter . . . No! You don’t have to first become a bodybuilder to become a weightlifter . . . three reps in the various exercises are all you need to build size and strength. Low reps give a maximum improvement in strength and size of muscle and a minimum of fatigue. You don’t need a “pumped up” feeling to get big muscles. I tried high reps for my arms when I wanted to make them larger and I found they did nothing for my arm size. In any exercise I like doing 3 reps and no more than 5 reps. Sometimes I do one rep for good results. Exercises should be devoted to increasing the strength in regard to certain muscles used in lifting and that does not include the calves, pecs or biceps . . . I work out when I feel like it and do as many sets as my energy will allow. (My personal observation of Doug is that he does only one or two exercises a day when training for strength, and these exercises are: the full squat, supine press, and military press. He is now working really hard on the dead hang pull-ups in reps of two. This has brought his clean up to 400 lbs., which he did while training.)

Doug then went on to say, “I believe the king of all exercises is the bench press. However, I did get most of my power from handstand presses at which I did 15 reps at a bodyweight of 245 lbs. (Doug doesn’t do these handstand presses anymore, nor does he do the deadlift very often, except when training for a record in this lift, although he thinks they are important strength-giving exercises.)

Q: What hours do you sleep?

A: I average ten hours sleep a day. Weightlifting is very hard on the nervous system, so therefore must sleep and rest is needed for the muscles and the nerves. (Doug’s regular sleeping hours are from 2 a.m. to 1 p.m. He keeps late hours.)

Q: Doug, what do you do in your spare time?

A: I rest . . . lay around in the sun . . . conserve my energy. Among my recreational interests are playing snooker, going to the cinema, reading my encyclopedia, discussing philosophy, memorizing poetry. (He then gave a wonderful 10-minute recitation of Kellogg’s

Spartacus to the Gladiators at Capua


Ye call me chief; and ye do well to call him chief who for twelve long years has met upon the arena every shape of man or beast the broad Empire of Rome could furnish, and who never yet lowered his arm. If there be one among you who can say that ever, in public fight or private brawl, my actions did belie my tongue, let him stand forth and say it. If there be three in all your company dare face me on the bloody sands, let them come on.

And yet I was not always thus,--a hired butcher, a savage chief of still more savage men. My ancestors came from old Sparta, and settled among the vine-clad rocks and citron groves of Syrasella. My early life ran quiet as the brooks by which I sported; and when, at noon, I gathered the sheep beneath the shade, and played upon the shepherd's flute, there was a friend, the son of a neighbor, to join me in the pastime. We led our flocks to the same pasture, and partook together our rustic meal. One evening, after the sheep were folded, and we were all seated beneath the myrtle which shaded our cottage, my grandsire, an old man, was telling of Marathon and Leuctra; and how, in ancient times, a little band of Spartans, in a defile of the mountains, had withstood a whole army. I did not then know what war was; but my cheeks burned, I know not why, and I clasped the knees of that venerable man, until my mother, parting the hair from off my forehead, kissed my throbbing temples, and bade me go to rest, and think no more of those old tales and savage wars.

That very night the Romans landed on our coast. I saw the breast that had nourished me trampled by the hoof of the war-horse,--the bleeding body of my father flung amidst the blazing rafters of our dwelling! To-day I killed a man in the arena; and, when I broke his helmet-clasps, behold! he was my friend. He knew me, smiled faintly, gasped, and died;--the same sweet smile upon his lips that I had marked, when, in adventurous boyhood, we scaled the lofty cliff to pluck the first ripe grapes, and bear them home in childish triumph!

I told the prætor that the dead man had been my friend, generous and brave; and I begged that I might bear away the body, to burn it on a funeral pile, and mourn over its ashes. Ay! upon my knees, amid the dust and blood of the arena, I begged that poor boon, while all the assembled maids and matrons, and the holy virgins they call Vestals, and the rabble, shouted in derision, deeming it rare sport, forsooth, to see Rome's fiercest gladiator turn pale and tremble at the sight of that piece of bleeding clay! And the prætor drew back as I were pollution, and sternly said, "Let the carrion rot; there are no noble men but Romans."

And so, fellow-gladiators, must you, and so must I, die like dogs. O Rome! Rome! thou hast been a tender nurse to me. Ay! thou hast given to that poor, gentle, timid shepherd lad, who never knew a harsher tone than a flute-note, muscles of iron and a heart of flint; taught him to drive the sword through plaited mail and links of rugged brass, and warm it in the marrow of his foe;--to gaze into the glaring eyeballs of the fierce Numidian lion, even as a boy upon a laughing girl! And he shall pay thee back, until the yellow Tiber is red as frothing wine, and in its deepest ooze thy life-blood lies curdled!

Ye stand her now like giants, as ye are! The strength of brass is in your toughened sinews, but to-morrow some Roman Adonis, breathing sweet perfume from his curly locks, shall with his lily fingers pat your red brawn, and bet his sesterces upon your blood. Hark! hear ye yon lion roaring in his den? 'Tis three days since he has tasted flesh; but to-morrow he shall break his fast upon yours,--and a dainty meal for him ye will be!

If ye are beasts, then stand here like fat oxen, waiting for the butcher's knife! If ye are men, follow me! Strike down yon guard, gain the mountain passes, and there do bloody work, as did your sires at old Thermopylæ! Is Sparta dead? Is the old Grecian spirit frozen in your veins, that you do crouch and cower like a belabored hound beneath his master's lash? O comrades! warriors! Thracians! if we must fight, let us fight for ourselves! If we must slaughter, let us slaughter our oppressors! If we must die, let it be under the clear sky, by the bright waters, in noble, honorable battle!


Memorizing lengthy bits of poetry is only a small part of Doug’s literary activities. He is well read on many subjects pertaining to human behavior and is at present studying Yogic teachings and mysticism as interpreted by Paul Brunton

Doug is constantly enlarging his knowledge and understanding of life and its many forms.
To Doug Hepburn, weightlifting is hard work. His right calf deficiency will not permit the full movement necessary for heavy cleans. This is a barrier, one that he is fighting in order to please public demand that he continue in the Olympic lifts. He is a weightlifter by public pressure and not by personal choice. He is and will be by his own choice a strongman, in the true sense of the word. He enjoys doing feats which require a minimum of skill and a maximum of strength. He can’t picture Louis Cyr doing the Olympic lifts. He wants to be known, for years after his death, as the strongest man that ever lived.

It is quite common to hear Doug say something like this:

“Where is it all getting me? You do a 381 clean & press and they want 400. Do 400 and they want 430. And what do you get for it? Pats on the back . . . all the pats on the back won’t buy you a meal when you’re fifty and forgotten. I want security now and in my old age. Sure, I could go on remaining an amateur and more than likely clean & press 430, but why should I? Cleaning that much weight would require much hard work on the clean . . . something I don’t enjoy doing . . . something which is painful and difficult for me because of my right calf deficiency.”