The Back, Part Four - Dominic Juliano 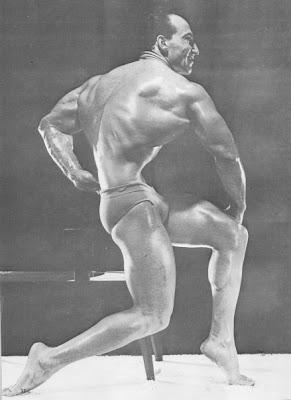 The Back, Part Four – Lat Specialization

When I first began training, my goal was to get as big as possible just as fast as possible. Most of my earlier workouts were devoted to squats, bench presses and curls. After meeting Marvin Eder in 1949, I began to train with him at John Terlazzo’s Gym in . During the four years that Marvin and I trained together I really learned the importance of lat work.

Well-developed lats add the finishing touch to a man’s upper body. Steve Reeves was probably the first bodybuilder who really specialized on lat width. Since Steve won the Mr. America title in 1947, massive lat development has really been in vogue.

Over the years, I have had the opportunity to see a great many physique champions train. In almost every case, the men with the most sensational upper back-lat development agree that one exercise in particular helped them achieve their exceptional development – THE TWO ARM CHIN.

There are many variations of chinning. I have found a method that seems to thicken and widen the lats much faster than any other chin-up movement. Before actually describing the lat specialization program, there are a few training hints I would like to pass along to you.

To my way of thinking, the most important thing to remember when working a muscle is to fully concentrate all of your attention on what you are doing. It is necessary to feel every repetition and try to get an extra strong contraction on each movement. For example, when performing a curl, the exercise becomes more effective if you thoroughly flex the biceps with each rep. This same idea should be applied to your lat routine.

Another thing that I have found very helpful for stimulating lat growth is keeping the muscles under constant tension. This is done by fully contracting the upper back muscles on every rep as described. When the weight is returned to the starting position, don’t allow the arms to fully straighten. In other words, by not completely locking out the arms, the lats are unable to rest and they remain under constant tension throughout the exercise.

In my opinion, cheating exercises have no place in a lat specialization program. You can’t force muscles to grow by handling more weight than you are capable of using in strict form. Muscles aren’t impressed by poundage in the least, but only by how much direct stimulation they receive. By completely focusing all of your attention on each rep and using correct form, the lats receive maximum benefit, which is, after all, what you want.

When it comes to lat development I have found that higher repetitions result in faster growth.

Here is the lat specialization program that I recommend. Remember that it is a specialization program designed to rapidly improve your lat and upper back muscles. When you are satisfied that this area is sufficiently developed for the time, you may then concentrate on some other muscle group, or return to a good overall training routine.

1.) Chins In Front – I can honestly say that I owe most of my lat development to this exercise. Take a medium grip on the chinning bar and lean slightly backwards as you pull your body upward until you touch the bar with the upper part of your chest. Lower your body slowly, spreading the lats as you do, until your upper arms are parallel to the floor. In reality, this is more of a half-chinning movement. It allows you to keep the latissimus muscles under continuous tension throughout the exercise. 8 sets of 15 to 20 reps will produce results. Don’t rest more than one minute between sets.

2.) Long Pulley Rowing – Here is another terrific movement for the entire latissimus group. While seated on the floor with the feet braced, grasp the handle of the wall pulley and pull back until the hands touch the chest. Tense the upper back muscles before allowing the pulley to return to the starting position with the arms not quite fully locked-out. Repeat for 5 sets of 15 reps. (If you do not have a wall pulley, substitute close grip barbell rowing. This movement is done by bending forward at the waist so that your back is perfectly flat. Grasp a suitably loaded barbell with the hands about eight inches apart. Pull the bar right up until it touches the upper abdomen. Forcibly contract the lats before lowering the bar back toward the floor. As with the pulley, don’t let the arms completely straighten but keep continuous strain on the lats for the full 15 reps.)

3.) One Arm Rowing – This exercise will add considerable thickness to the latissimus dorsi and teres major muscles. Bend forward at the waist and grasp a dumbell with the right hand. The left hand is placed on a bench for balance and support. Start with the arm slightly bent and with the dumbell almost over the left foot. Pull the dumbell up in an outward-sweeping motion until it touches the right pectoral area. Lower the weight slowly, allowing the lat to spread out and become thoroughly stretched. Repeat for 3 sets of 15 reps with each arm.

4.) Straight Arm Pulldowns – Here is an excellent finishing movement for the program. Take a close grip on the overhead lat bar and lean slightly forward at the waist. Pull the bar downward from the overhead position all the way down to the thighs with straight arms. Thoroughly contract the lats and upper back before returning the bar to the overhead position. Resist the pull all the way up by spreading the lats. Perform 4 sets of 20 reps.

In between each set of the above exercises stretch the lats by grasping a vertical pole and gently stretching and spread the lats for about 10 seconds.

Use this lat specialization schedule three times a week. It is advisable to keep the rest of your workout to about one hour or so as it will take about 35-40 minutes to complete the lat program.

Because of their importance the following points bear repeating:

1.) Focus all your attention on each movement and contract the latissimus muscles with every rep. Remember to spread the lats as wide as possible as you return to the starting position. Don’t just go through the motions.

3.) Maximum rest between sets is one minute.

4.) Perform ten seconds of lat stretching exercises in between each set of each exercise.

Not only have I greatly benefitted from this program, but every bodybuilder at VINCE GIRONDA’S GYM that has used it has made great gains. I am sure you will make fine improvement also if you use it faithfully.