The Back, Part One - Samuel Homola 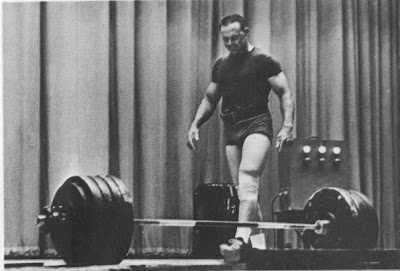 The Back, Part One

We’ve all heard the old adage that a chain is only as strong as its weakest link. This is true, of course, and has special meaning when we think of the back in its role of supporting practically everything we do, especially bodybuilding and weightlifting.

Many things can go wrong with the back, some of which cannot be avoided, but there is no excuse for weak musculature in the back of a weight trainee . . . and there is rarely such a weakness by the usual standards of athletes. But persons who lift weights – for bodybuilding, weightlifting, or both – must make a special effort to acquire extraordinary low back strength in order to protect themselves from possible strain.

The bodybuilder, of course, usually takes adequate exercise to widen and thicken the muscles of the upper back in order to balance his physique, but too often in efforts to keep the waist and hips small the low back area is neglected.

I’ve seen a great many bodybuilders who had a waist like a wasp, and who, in addition to neglecting weightlifting exercises per se, did so many of their bodybuilding exercises in supine, incline and prone positions that they had a low back that was relatively weak – that is, it was weaker proportionately than their arms, legs and abdominals. In time this could result in a serious low back strain in unaccustomed lifting or labor. A bodybuilder who can bench press 300 lbs. and squat 400, for example, might impose strain upon the weaker lower back if he should attempt to lift a keg of water or push his car out of the mud; the arms and legs are strong enough for the job but the back isn’t. So for your own protection make sure that you also strengthen your low back area with your workouts. It would be a shame to be put out of commission by a needless back strain owing to underestimating the importance of the low back, but if you don’t take measures to prevent such an accident, it’s waiting to happen.

It may be a matter of opinion, but I believe that a bodybuilder with thick spinal erector muscles plus the well-developed external obliques that frame the lower portion of the rugged looking abdominals is not only stronger than his narrow-waisted counterpart but also has a more manly appearing physique.

This power is also more evident when the latissimus dorsi muscles are heavily developed all the way from their origin (which begins in the low back area) to their insertion in the back, top portion of the upper arm (near the head of the humerus). The body man who looks like he’s got a sharply demarcated balloon under each arm when he does a spread does not necessarily have more muscle than one whose lats seem to taper down into his waistline.

In any event, no two physique types are exactly alike, and you probably won’t be able to build a physique like the one you admire. Nevertheless, make an effort to assure maximum development and strength in ALL of the major muscles, and select those exercises that use the muscles in movements that the muscles were designed to undergo. For example, the latissimus dorsi muscles are designed to pull the arms down and back. Thus, bentover barbell rowing motions for these muscles should be done by keeping the elbows close to your sides and pulling the bar to your waistline, instead of straight up to your chest. When you do rowing motions by lifting the bar to your chest, with your elbows pointed out, you throw most of the work on the trapezius, the rhomboids and other muscles high up between your shoulders, and the lats are used but little – at least not enough to assure full development throughout the length of the muscle.

I won’t have space to discuss the technical aspects of all the exercises described in this article, but you can rest assured that they are designed to make maximum use of the muscles they’re recommended for . . .so do them as instructed, and don’t take the easy way out by altering body positions.

You may not want to do all of the exercises listed in this article in one training session, but try to allot time to all of them (by alternating them) over a period of several weeks.

1) Bentover Rowing Motion – This is the most important barbell exercise for building the latissimus dorsi muscles. Bend forward at the hips, let the knees bend a little, and, keeping the back flat, pull the barbell from the floor to your navel. Be sure to keep your elbows close to your sides.

Use as much weight as you can without “jerking” the weight up, but occasionally overload the bar so that you have to “cheat” a little in your final reps.

Rowing exercises may also be done with dumbells by bracing one hand on a chair and using a dumbell in the opposite hand.

2.) Bent-arm Pullover – Lie supine on a padded bench, with your head hanging over the end; reach back over your head and pull a barbell from the floor to your chest. Get a shoulder-width reverse grip on the bar, and keep your elbows pointed up a little in this exercise so that there will be more action in the back muscles in pulling the weight up toward your chest.

3.) Wide Grip Chins – Grasp a chinning bar with a reverse grip (knuckles facing you), spacing your hands as far apart as you comfortably can, and do several complete chins. Strap enough weight around your waist to force maximum effort within 8 repetitions. When chinning without the added weight, try to touch your chest to the bar, or chin behind the neck if it causes no strain on the shoulder joints.

Overhead pulley exercises, in which the lower half of the body can be strapped to a secured bench, will provide similar exercise. Any exercise in which the arms must pull down is good for the deeper lying infra spinatus and teres major muscles, as well as the latissimus dorsi muscles.

4.) Bentover Lateral Raises – Bend forward at the hips, letting the knees bend a little for comfort, and, keeping the back flat, lift a pair of dumbells from the floor out to the sides with fairly straight arms. This exercise will develop the posterior deltoids and the rhomboid muscles between the shoulder blades.

5.) Shrugs – Standing erect with a barbell down at arms’ length, “shrug” by lifting the shoulders up toward the ears. Use as much weight as you can handle for 12 to 15 repetitions. Shoulder shrugs develop the trapezius muscles (the triangular-shaped muscle on each side of the neck that runs from the base of the skull to the tip of the shoulder and to the thoracic vertebrae), as well as the deeper lying levator scapulae muscles.

Note: most of the muscles on the back of the neck and classified as back muscles, so don’t neglect your neck exercises. Nothing will spoil the appearance of a well-developed back like a narrow, stick-like neck. Neck extensions with a head strap will provide adequate exercise for the posterior neck muscles.

There are many other exercises that provide good exercise for the muscles of the upper back, such as standing presses, lateral raises with dumbells and stiff-arm pullovers, but for brevity I have described only those that are specific for the major muscles of the back.

6.) Deadlift – Deadlifts, lifting a weight from the floor with the arms in a dead hang, may be done stiff-legged or with bent knees, depending upon how much weight you are using and your reason for doing them. When done stiff-legged, the muscles on the back of the thigh and hips are brought into play in extending the trunk, and the increased leverage largely limits the action to the hip area; only a limited amount of weight can be used (this exercise may also be done in a “good morning” fashion by bending forward while the weight is supported across the back of the shoulders).

When deadlifts are done with bent knees, however, a much heavier weight can be used and the spina erecta muscles receive a heavier workout. Squat fairly low to grasp the bar (with a mixed grip – that is, one hand turned one way, and the other hand turned the other), keep the low back as flat as possible, and lift largely with the legs. Always do one or two sets of the exercise with a light weight before using heavier weights.

In any kind of deadlift exercise, don’t use too much weight. Heavy, one-rep maximums could result in serious injury, so I would suggest that for bodybuilding purposes the exercise be done with a weight light enough to permit several repetitions well within your maximum effort.

When doing stiff-legged deadlifts, be careful not to pull your hamstrings or strain your sacroiliac joints by letting the weight pull you too far over. Don’t drop the weight to the floor, lower it with a constant tension on the muscles, and don’t bend over any further than is comfortable.

7.) Hyperextensions – Lie face down on a padded bench, with the upper half of the body hanging over the end of the bench and the lower half anchored down (from the hips down). With a weight across the back of your neck, arch up from the floor to a fully extended position.

This exercise is one of the finest for developing the spina erecta muscles, and there is no danger of strain.

8.) Side Bends With Dumbell - Standing erect with a fairly heavy dumbell in one hand, bend from side to side. Side bends develop the quadratus lumborium muscles on each side of the spine (used in bending the trunk laterally). Be sure to exercise both sides equally.

9) Heavy Cleans – Every bodybuilder should be able to clean a fairly heavy weight, since cleaning is an important part of weightlifting – and it’s an excellent exercise for the back.

Squat down, keep the back flat, grasp the bar with a shoulder-width knuckles-up grip, and, lifting with the arms, legs and back in one heaving motion, lift the bar to your chest. Catch the weight by dipping under the bar (bending the knees) when you have pulled it high enough to do so comfortably.

Make sure that you strengthen your low back as you build up your upper back. Don’t be one of those bodybuilders who has a bad back when it comes to weightlifting. Physique contestants who are also weightlifters have better physiques and earn more points for their athletic ability. Handbalancing is another way to build a strong back with athletic skill, as are many other sports.