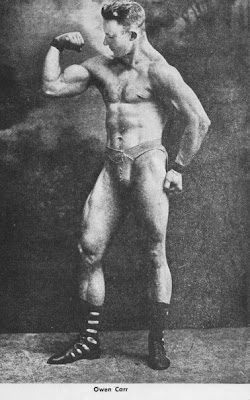 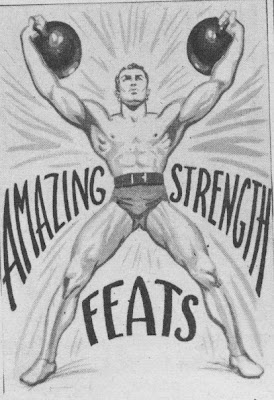 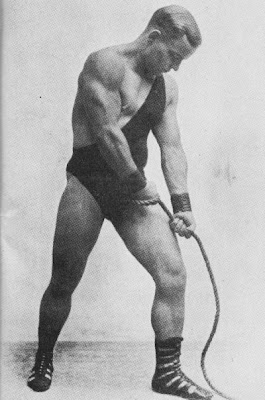 The value of halteres in training muscles for other exercises was recognized by the Romans, for in the medical writings of the 2nd Century A.D. “halter throwing” had developed into a regular system of dumbell exercises. Antyllos describes three kinds of halter training – bending and straightening the arms, the lunging, and bending and straightening the trunk, and Galen describes an exercise for the side muscles.

In a treatise on the Preservation of Health by Galen, one of the most famous Physicians of antiquity, there is a lengthy discourse on exercises suited to youths between 14 and 20 in which exercises for the legs, arms and trunk are separated. He further classified exercises into those for toning the muscles without violent movement, quick exercises which promoted activity, and violent exercises. In the first class he included carrying heavy weights and exercises for duo-resistance, and his quick exercises come into the category of violent when performed with halters.

The word “halters” was also probably applied to much weightier dumbells and the like. Martial, a poet and writer of epigrams (A.D. 40-104) asked: “Why do the strong men labor with their stupid dumbells” A far better task for men is digging a vine trench,” a sentiment to which the folks of that day with their unbounded facilities of open air exercises presumably subscribed. However, in modern days one cannot indiscriminately open a trench (vine or otherwise) when one has the urge for exercise, so the stupidity of which the poet speaks is perhaps not quite so apparent in those who still “labor” with their dumbells.

Weightlifting was not confined to either. It was also practiced in ancient , according to Gardiner, who shows a drawing of an athlete lifting a huge tapering weight in the style known to us as the swing.

Weightlifting in a form presumably resembling what we practice today is traceable back in the country at least 400 years, but before referring to this ancient “heavy bar lifting” it is necessary, in order to place it in its proper perspective, to examine its connection with heavy athletics. Fundamentally all gymnastics or sport-gymnastics (such as weightlifting now is) spring from Athletics, using that word in the ancient Grecian sense of fundamental movements: running, leaping throwing, etc.

In this field we can go back even further than the traceable reference to Athletics among the ancient Greeks, for it is believed that the Irish (Tailtin) Games held as far back as 1829 B.C., no less than 3,679 years ago as I write, included weight-throwing under the name of “rotheleas” or the “wheel feat.”

Then, according to Strutt’s “Sports and Pastimes of the People of England” (Edition of 1831) “Throwing of heavy weights and stones with the hands was much practiced in former times and as this pastime required great strength and muscular exertion, it was a very popular exercise for military men.”

In Montague Sherman’s review of the history of Athletic Sports (The Badminton Library) competitions in running, jumping and hurling of heavy weights are said to be one of the chief characteristics of both town and country life in as far back as chronicles will reach. For example, young Londoners in the reign of Henry II (1154-1189) cast the stone amongst other exercises practiced in open spaces set apart for them.

In we learn from “Sports and Pastimes of Scotland” (Fittis, 1891) that putting the stone, tossing the caber and throwing the hammer are among the oldest of the Highland Games. In former times it appeared to have been the custom in to have a putting stone lying at the gate of every chieftain’s house and on the arrival of a stranger he was asked as a compliment to throw.

Another Scotch feat was to raise a stone of at least 200 lbs. weight from the ground and deposit it on top of another four feet high, and when a “stripling” could accomplish this he was thereupon deemed a man and allowed to wear a bonnet.

Strutt goes on to say that “casting of the bar is frequently mentioned by the ‘romance writers’ as one part of a hero’s education,” and a poet of the 16th Century thought it highly commendable, even for Kings and Princes by way of exercise to “caste by violence the stone, barre or plummett.”

Henry VIII (1509-1548) after his succession to the throne, according to Hall and Holinshead, retained “the casting of the barre” amongst his many and varied amusements. This sport had not always been in Royal favor, as the Kings of England were afraid that the practice of Archery might fall into disuse, and we find Edward III (1327-1377) prohibiting, among other things, weight putting or throwing the stone, by proclamation, although even after the accession of Edward II (1307-1327) to the throne, the later’s daily amusements had included such form of exercise.

Such weightlifting as there is in the form of small dumbell work was also known in early times in this country. John Northbrook, in a treatise against Diceing, Dancing, etc. written in the time of Queen Elizabeth (1588-1603) advised young men by way of amusement to “labour with poyses’ of leadde or other metall” which consisted “in brandishing of two sticks grasped in each hand and laden with plugs of leadde at either end” which pastime “opened the chest, exercised the limbs and gave a man all the pleasure of boxing without the blows.”

The first traceable mention of weightlifting or straightforward barbell work in appears in “The bake named The Governour” (the book entitled “The Governor”) published by Sir Thomas Elyot, in the year 1531, relating to the education suitable for a gentleman’s son who prepared to serve the Commonwealth. Under the head of “sondry fourmes of exercise necessary for every gentleman” and “Touching such exercises, as many be used within the house” appears “Liftynge . . . the heavy . . . barre . . .” thereafter lost for some considerable time, but might not one assume that, as with “pitching the barre” (Stowe’s Survey of London, 1720), it became one of the diversions of the “lower classes” only, including the pleasurable reactions usually associated with the latter pastime it feel into disuse, shorn of the patronage which has always been such a feature of popular English sports and games!

It has, however, seriously occurred to me that for centuries a certain amount of “class distinction” appeared to have entered into sports and athletics in this country, and that this even now this may be reflected in our comparatively poor showing in the Heavy Athletics field, including Field events and Heavyweight Boxing and Wrestling. In other words, the more “manual” types of physical endeavor have never been fully catered for or fostered and in one glaring instance, Rowing, definite and deliberate rules were laid down forbidding manual workers to compete in certain events.

An interesting theory, and I content myself here by showing one or two examples. According to Strutt, James I (1603-1625), addressing his oldest son, declared that whilst bodily exercises and games were very commendable, he debarred all rough and violent exercises at his court. In Poachman’s “Complete Gentleman” (1622), throwing the hammer and wrestling were held “not so good.” In “Hereward the Wake” one of the characters is reprimanded for consorting with athletes of that type.

Generally, Lindhard (“Theory of Gymnastics) points out that up to the beginning of the 19th Century athletics were always the privilege of a chosen few, of the patrician of antiquity of the Middle Ages and the upper classes of the age of enlightenment.