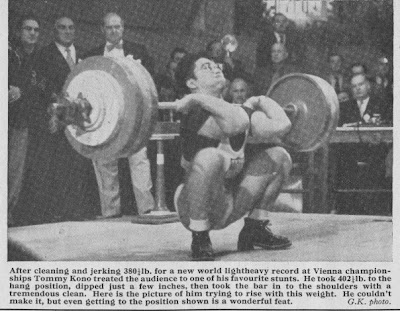 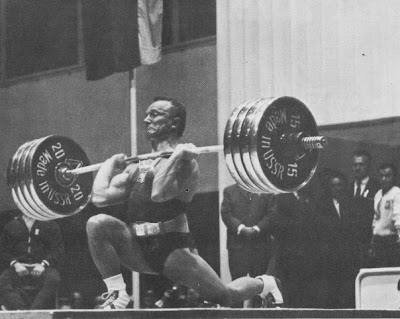 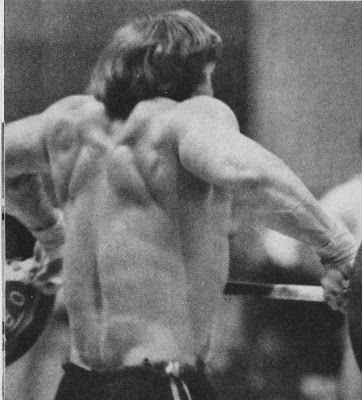 Raising Your Power Potential
by David Martin (from Vigour, 1953)

Joe Dixon and Charles Coster have both in their different ways tried to make it obvious to readers that if they wish to succeed they must cultivate Strength rather than Science. This theory can, of course, be carried too far – it is, for instance, obvious that had Tom Griffiths been caught early enough by an expert on style, like Al Murray, he would have been able to add at least ten percent to his top lifts. In fact, as I am constantly reiterating, all roads lead to and we have to make use of as many routes as possible. It is true, however, that lots more has been said of recent years concerning technique than the cultivation of Power.

I think also we have been guilty of pandering to the muscle measurers rather than the strength athletes but that is, of course, the fault of our readers who (alas!) have demanded more information concerning pulchritude than advice on power.

It is occasionally our duty, however, to give you – not what you WANT but what you NEED, and speaking for myself I would be glad to see a few more technical weightlifting articles from those with the ability to impart such knowledge.

Although not exactly a tyro myself, I feel that this type of article is strictly not my meat, but I hope Charlie Coster will oblige – or someone equally well qualified. However, during my thirty-seven years on this planet, I have done some thoughtful observing and quite a lot of experimenting and the rest of my remarks arise out of this experience and thought. You are at liberty to disagree if you wish!

I think it was Siggy Klein who said, “Train for shape and strength will follow,” and although far too sweeping a statement by itself, that phrase contains enough truth to command a certain respect. The main flaw in the statement is that it does not specify how you should “train for shape.” Light dumbell or strand exercises which may have some effect on your shape have little or none on your strength. There is, however, truth in Charles Coster’s remarks of a few months ago that if you wanted to improve your Press you must work to increase the bulk of your deltoid muscle. So, I add my testimony to that of Klein and Coster!

This increase in basic strength, however, would be obtained at the risk of a loss in technique if the movements were purely body building ones and I have compiled the following exercises which, if carried out properly, should combine the virtues of power-building with a stricter regard for lifting muscle-patterns.

This exercise which I introduced to Vigour readers a long while ago has been endorsed by Bosco and Fraysher Ferguson. Take a barbell of around your own bodyweight, Clean & Jerk it over on to the back of your neck. (A pad is definitely advised) Assume a fairly deep split position and then with a spring upward of the body, reverse leg positions. Do this steadily for a time until you get the feel of it. Once you are confident in the movement, speed up the action and try to get at least 15 repetitions. As a general body building exercise this is, in my opinion, equal to the Squat and it definitely strengthens your split, also cultivating balance and timing for the Snatch and Clean.

For improving the Press and enlarging the deltoids and triceps I recommend three exercises – the Bench Press is the first. I know Johnny Grimek (may his tribe increase) has said some unkind things about this lift, claiming that overdeveloped pectorals will “drag” at the presser in an erect position and that one will involuntarily contract them while doing a standing Press. Well, it’s a nice theory, but both McKinlay and I find that our standing Press increases in a fixed ratio along with our Bench Press, and as we do more bench pressing than standing pressing we must attribute the increase to the former.

Personally I think that a person who involuntarily contracts a muscle opposed to the action he wishes to perform had better learn some muscle-control, quick, or he’ll be frozen in his tracks! The Bench Press strengthens the wrists, deltoids and triceps – all of which are used heavily in standing pressing.

The Two Hands Clean and Push

Finally, the Two Hands Clean and Push – a much neglected lift – unless you admit that some of the Olympic Presses get very near to it at times! The weight is cleaned to the shoulders, the legs placed astride, and then the body is slowly bent forward from the hips until a point is reached where further bending would tilt the weight off the shoulders. At this position the weight is held for the count of two, and then without bending the knees the trunk is brought rapidly erect and the weight is “pushed” upwards and slightly backwards. To finish the lift, one may bend as far back from the hips as is possible, without falling over.

That particular lift embodies almost all the faults of a “bad” Press but it teaches you how to control those faults, and it strengthens all the muscles that come into action when you are trying to control a good Press. The deltoids, erector spinae and buttock muscles all get a strenuous going over as, of course, do the triceps. You should be able to get six or seven reps out of your top strict Press poundage in this lift. I prefer it to “jerk Pressing” because the start of a press is also a sticking point with some, and this exercise gives the deltoids more work to do at than point than “push jerks” do.

For the Clean, one is usually recommended to do “rowing” exercises, but I have a purely personal prejudice against this exercise, which I may rationalize by saying that there are too many points in the movement where one is tempted to cheat too much. I therefore prefer “Cleaning from the Hang” with or without a split or squat.

My other heavy power-builder for Cleaning is another old friend – The Continental, which breeds a more lasting stamina than merely supporting weights on the shoulder that you have lifted from a squat stand. The Continental as a power-builder for the Clean, however, must be approached from a slightly different standpoint from that of the old “Bier Garten” kings. The belt should be fixed as high as possible – nearly on the sternum bone, and the weight should be only allowed to “bounce” there once, and not be slowly lifted on to the belt and joggled up and down several times before hoisting to the shoulders.

In short, your Continental, when used for the purpose of increasing your Clean, should be as rapid and as near to a Clean as possible. The idea is that by lifting up a weight nearly fifteen percent heavier than you can Clean, and lifting nearly to pectoral level (where it should bounce neatly off the belt and on to your deltoids) you get used to lifting a heavy weight high, and holding it on the shoulders. The feeling is quite different from that which you get lifting a similar weight from a squat rack. In the first case, the weight feels “live,” whereas when taken from the racks the weight feels very “dead.”

You should start this exercise with your top Clean poundage and this should enable you to jerk the weight once or twice. The energy you have saved in cleaning can be applied to jerking. If you can Jerk more than you can Clean, then you should add weight to bring it up to your top Jerk poundage and do one rep at that. After this add more discs and do one or two reps of the Continental only. You will soon find that you can elevate to the shoulders at twenty-five pounds more than your best Clean and after handling this new weight at the shoulder for some period you will become accustomed to the feel of it and have a corresponding contempt for your previous best Clean. It really is most important that you pull the weight as high as you can each time, and that you hold it at the shoulder long enough to get the “feel” of controlling a very heavy weight.

I you do several sets of these exercises with increasing poundages I recommend that you do 6-5-4-1-1-1 reps, for you will find that the last three sets of singles, if done with really heavy poundages, are quite tiring.

The above is not a course in itself but just a collection of lifts calculated to increase your Basic Strength. You can include them in any existing routine, providing you remove from that routine any similar exercises involving similar muscle group movements.

If your Press and Clean do not improve after three months of implementing the above, I shall be, as Bosco says, “Dumbfoundered.” Give it a try!