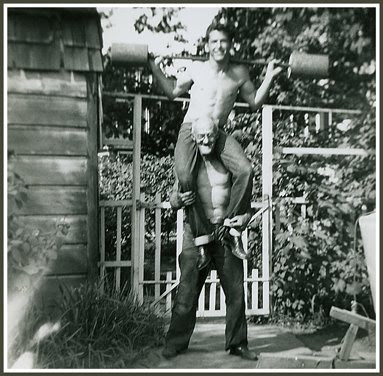 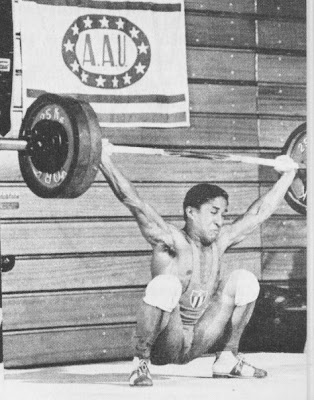 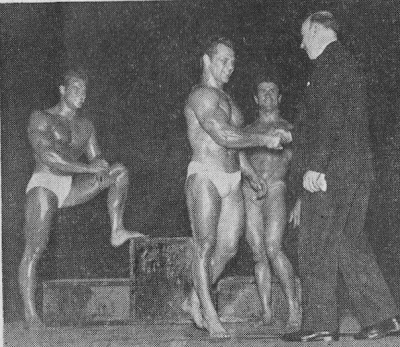 While on the subject of improving British lifting performances I would like to point out that for a variety of reasons my own lifts are not particularly good, and also impress on readers that mere “know-how” will not help them lift much more weight. It is on this point of “basic strength” that I agree with both Charles Coster, but disagree with him on the matter of the “trainability” of Strength being easier than that of Technique. Starting off as a 7 ½ stone weakling with as bad a set of reflexes as one could have, I have found that neither technique nor basic strength can be trained for “easily.”

This does not mean that either are impossible of attainment or improvement, but I do think that there are limits for certain people who, like myself, start off low down the scale. Further, I also believe that in spite of my own mediocre ability I am still in possession of enough “know-how” to help others. Only, however, if they apply the information given them and understand it thoroughly.

I don’t know if any of you boys have heard of G. I. Gurdjieff but he was a pre-revolution combination of Frank Buchman and Bernard Shaw. He was smart enough to move to where they had more time and patience with what some may call “cranks of that sort” – however, I only mention him because of a statement he makes in the preface to one of his books.
Here it is:

Which sounds a bit of a cheek but that’s the way most philosophers treat their disciples. Now Larry Barnholt’s book on the Squat Snatch says the same thing more politely – it just says, “read this book over and over again.” I have done so and feel that the Barnholt boys who know their stuff may have overestimated their readers. Therefore, I am taking the liberty in this article of expanding their instructions slightly for the benefit of those who cannot read between the lines.

Before going into technicalities, however small, I must urge all my readers to try the Squat Snatch and to try it seriously for a while, because once the growing pains are over you might find that you can lift more in this manner than in the conventional split style.

However, once you have decided on the style you are going to use, you should not “fiddle about” for one reason, and that is that the secret of lifting technique is to cultivate good lifting habits. Your feet, hands and body must move without thought, automatically – it is therefore important to go through one set of motions as often as possible to build up habit grooves.

Now, about the precise interpretation of the Squat Snatch movements.

First, about the loosening of the shoulders. I was surprised to note that the Barnholt Brothers never used the word “dislocation” once. Yet the ability to take a barbell right overhead and down the back without bending the elbows is perhaps best demonstrated in another medium by the “dislocation” on the rings. If you can get a pair of Roman Rings to play on, by all means try the “Flying Dislocation” as well as the usual exercise of taking a broomstick with straight arms overhead and down behind the back.

Go easy with dislocation exercises as the deltoid muscle and shoulder structure are among the easiest to strain and the hardest to treat and heal.

The second point about the Squat Snatch which beginners are inclined to overlook is the immediate recovery. Perhaps the many photographs of Dave Sheppard and Pete George snapped at the lowest point of the Squat Snatch have helped us to think that this position is held for a long time. They certainly look “set for life” down there, but the Barnholts are quite definite about the “bounce up” and it will be quite obvious once you think of it that you can bounce up with much more than you could slowly rise with.

So, there are two points I am underlining for the Squat Snatcher:

1) Learn to be able to dislocate the shoulders forwards and backwards with ease.
2) Learn to bounce up from the full squat speedily and safely.

Now, for the third and last point – the Jump down to the Squat. This is precisely what happens – You do NOT “squat down.”

Let us take the split style first. Once the weight has reached eye-level, you “fling” the feet fore and aft, flexing the front knee as far as possible. By reason of the fact that the forward leg has a greater freedom of movement than the rear leg, this means that as you descend the rear foot will touch the floor first. This should throw the body slightly forward under the weight – repeating the action of the Egyptian Camel Step but doing this much snappier as the body is falling freely. At the same time as the legs are flung fore and aft, the arms are pushed upwards vigorously, which should accelerate the downward thrust of the body and cause the feet to slam on the floor.

Now, when Squat Snatching, there is no thrust from the rear leg, therefore the body has to come forward and the feet must jump forward in order to be in a position to balance the weight.

So, in the Squat Snatch as the weight passes eye-level, the head is poked out through the arms and the knees are both curled up to the chest while the seat is thrust well back. The arms are thrust vigorously upward against the weight which in turn shoves the body down against the knees. The body now in the full squat position, but slightly clear of the floor, should slam down on the feet and the chest, recoiling off the knees, should start the weight on its upward journey on locked arms.

I think a little free-jumping to “slam down” in the squat position without any weight should be tried just to give you the feeling and the balanced recoil that is necessary.

However, I repeat, once you have found that one or the other styles suit you, do not swap about any further.

Incidentally, while watching Jumping Jim Halliday breaking the record in the One Hand Snatch, I realized that his claim to be able to snatch in the Squat position as easily as in the was well justified. The position in which he finished his one hand snatches was similar to that of the best Squatters except, of course, for the half sideways twist that was necessary to hold the weight overhead with one hand.

As I said earlier, I came into this world from physically less than perfect parents, which brings us to what the late Czech Jan Masaryk would say when asked the reason for his success –
“I had the good sense to pick the President of Czechoslovakia to be my father.”

Train hard to improve your lot.