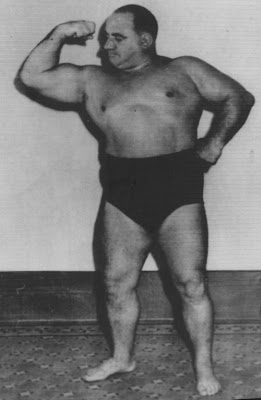 In 1936 Buck Harris constructed his first set of barbells by pilfering the grates from the family furnace and wiring them to a pipe five feet in length. He was a man-child of 15 at the time. “I don’t think my dad was too pleased about my resourcefulness,” recalls Harris. At the time, he didn’t know what a barbell was, and I’m sure he didn’t care to know. In all frankness, I think he liked the furnace a lot better a lot better than my weights. I know he got a lot hotter than that furnace ever did.” The old furnace has long since stopped pumping out hot air, but Buck Harris is still pumping up heavy iron. At the ripe old age of 74 Harris is still one of the premier master lifters in . The powerfully built senior has won National titles in both Olympic lifting and Powerlifting – nine such titles in the latter sport. He also won a World strength title in a ten event contest that is similar to the World’s Strongest Man competition televised by ESPN. Perhaps most impressive is the fact that he once defeated the legendary Paul Anderson. Actually “bombed,” but it is still a tour-de-force that Harris relishes. “ was the greatest strength athlete who ever walked the face of the earth,” says Harris. “I have seen a lot of great lifters in my time, but none of them, not Alexeev, not Kazmaier, not Coan or anyone else can compare to . He was in a category that is out of this world. Think about it. In his prime Paul stood 5’9”, weighed around 380 pounds, had a 24” neck, 24.5” biceps, 58” chest and massive 36” thighs. And, of course, he could lift anything you put in front of him. The lifts that was making in the Fifties would still be very competitive today. He squatted 2,000 pounds without a suit, belt or wraps. If he had all the equipment we have today I’m sure he could have done close to 1400 pounds and I’m sure he would have benched over 900. In other words he probably could have totaled close to 3,000 pounds. He was just as good an Olympic lifter too. I once saw him take 580 out of a rack and press it overhead with ease . . . and it was nothing for him to do 5 to 8 reps in warmups with the weight that his competitors were finishing with on the platform. Actually, when warmed up everyone would be watching him; they wouldn’t even pay attention to the competition. I said I competed against Paul Anderson, but really, no one could compete against him. He was in a class by himself. He was that great. It was an honor for me just to have competed against him,” states Harris. “If it weren’t for , I would have won a lot more championships, but I would have missed out on a lot of great moments. I would rather have the moments than the championships.”

is not the only great lifter Harris has competed against. Names like Schemanski, Venables, Shandor, Gursky, Abernathy, Davis and Masten come easily to his mind. Men who wave not only proficient Olympic lifting but powerlifting as well. “There were some great lifters during my time, real iron men. We didn’t specialize in any particular type of lifting. We would do everything; squats, snatches, high pulls . . . it didn’t matter. If there was something to be lifted, we would lift it.”