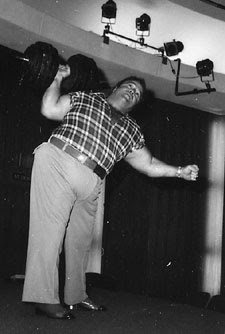 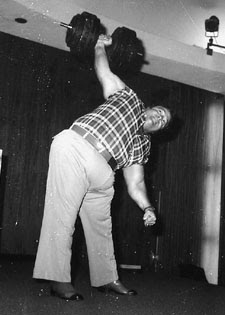 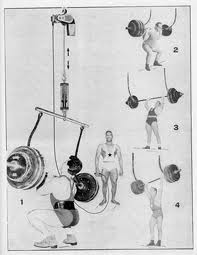 
In the past century the One-Arm Press was quite popular, whether it was the “contortionlike” Bent Press, One-Hand Military Press, or the Side Press. With the growing popularity of the Two-Hand Olympic lifts and the decline of the professional strongman, One-Arm lifts almost disappeared from the strength world scene. There are other reasons for the vanishing of these lifts, but I guess the death of vaudeville, which actually causes the disappearance of the professional strongman, was the greatest blow. Of course, during this same period of time and even up until the early 40’s, the One-Arm Snatch and One-Arm Clean and Jerk were performed in some circles. Even though these lifts required much strength and athletic ability, they were never really popular outside the weightlifting world. Before a general audience they were usually viewed with a little suspicion, because they had to be done with quick and agile movements. The viewing patron seemed to feel that there was some slight of hand or trickery employed when the One-Arm Snatch, and Clean and Jerk were done for his entertainment.

In the past several years I have found out why the old-timers usually included a One-Arm lift in their acts. During this time I have doe a kind of half Military, half Side Press, during my public appearances. As a rule, this has been the most popular feat of strength that I do. I first started including it because it was a convenient thing to include, since I could write ahead for the weights that I needed and take along a bar that was suitable for loading the plates on. I have a bar that is collapsible, and can be put in a small brief case. It is also convenient because it does not take up much room in a church sanctuary, where I often do several feats of strength along with my messages.
My first purpose in taking up the One-Arm Dumbell Press was to build arm strength for pressing and bench pressing. This is basically what I want to discuss here.
I first inaugurated the One-Arm Press into my workout in 1954. At this time I had been training for two years and had tried pressing tow dumbells together during my training sessions. This exercise did not seem to help my regular press so I abandoned it. Later when the “finish out” of my pressing power did not develop as fast as the start and intermediate part, I thought of going back to the dumbells to increase my triceps power. Before doing this I remembered my disappointment during my past training with dumbells and disregarded the thought all together.
Then I thought of the rule I have used throughout all the years of my training. That was to handle the greatest poundage possible with every muscle group. This was definitely not being accomplished with the two dumbells. By pressing them together I was handling less weight than I could press with a barbell. So, naturally, my theory was not being carried out. But then I though of lifting only one dumbell at a time. This way the one arm was lifting much more than its share in a Two-Hand Barbell Press. I found this to be a great help in giving the deltoid and triceps that extra power needed for the finish out in the Press and Jerk.
In performing the movement I have worked out several variations for training, but for my exhibitions I do lift in an orthodox manner. The variations I speak of in my workouts are mostly adapted to overcome the problem of balance and control of the weight while doing repetitions. Anyone who has tried the One-Arm Dumbell Press knows that on many occasions the weight can get a little too far out to the side or out front and the lift has to be terminated. This difficulty is especially prevalent when eight to 10 repetitions are being attempted. I have worked out tow effective ways to overcome the problem. One is to grip a stationary object with the opposite hand, after cleaning the weight, and holding onto it to keep your balance while lifting with the other arm. The other is to build an apparatus to simulate the Dumbell Press. This can be done by using a regular exercise bar. On the bar weld a large hinge to one end. Attach the hinge to the wall (about shoulder height). To hold it at this level another bar or support has to be welded to reach or extend to the floor (as shown in the picture). By placing the weight on the end of the horizontal bar the lifter can get into position and press overhead without the fear of getting off balance, or losing the weight. Another advantage is that you can vary the grip. The closer to the wall (or whatever the hinge is attached to) that you grip the bar, the heavier the weight becomes, because of the change in leverage.
To carry the One-Arm Dumbell Press even further, I have used it for the improvement of the Bench Press. Again, the orthodox Two-Hands movement in the Bench Press does not allow one to handle as much as he needs to give that extra something to the muscle group being worked. A variation of the Dumbell Bench Press can be used to as great an advantage here as in the standing position.
To perform the exercise, with the assistance of a couple of friends, take a heavy dumbell in one hand while you are in a supine position on the bench. You must distort this position a little by moving to one side and grasp one of the uprights with the free hand. With yourself secure in this position lower the dumbell into an extreme One-Arm Bench Press position as shown in the picture and press it up again. When doing this, try to almost perform what once was called the “Flying Exercise” as done with two dumbells. By using only one dumbell and supporting with the other arm, which really helps, you can perform this in a cheating manner and handle a great weight. This goes back to my original theory of handling the most weight that is possible with every muscle.
Try working these variations of the One-Arm Dumbell Press into your routine, and I feel that you will gain much strength for the poundages you desire to handle in the Bench Press, Jerk, and other pushing movements.