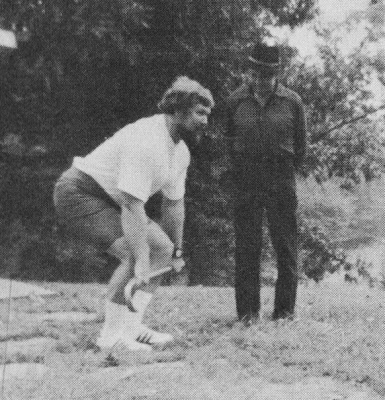 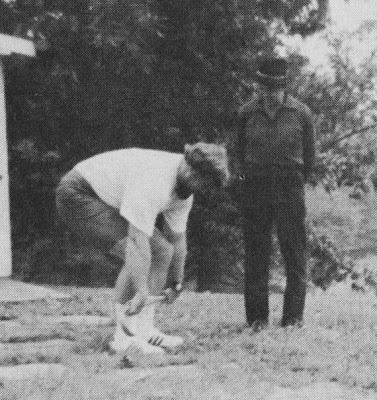 In these two photos, which were taken in the fall of 1972 at the Peoples farm near Johnson City, Tennessee, Bob Peoples watches as Dr. Terry Todd assumes two very different positions for the beginning of the deadlift. In the top photo, Dr. Todd is set in the traditional position recommended by most experts. In the bottom photo, he is set in the position developed by Bob Peoples and used by him in his record lift of 725 made in 1947 at a bodyweight of 181 pounds.
Consider the rounded-back deadlift, the style that has been seriously advocated in articles on power training only during the past year or so. Bob Peoples figured all this out several decades ago. He correctly reasoned that a rounded back helped the leverage in the deadlift by shortening the lever arm (the back) and therefore increasing the amount of weight that can be lifted. His thinking went far beyond even this. As an innovator, he was a true radical - he went to the roots of cherished assumptions and transformed them so that they bore better fruit. The established experts of Bob's day (and most "experts" today) all insisted that the correct deadlift position involved the following things:

Consider then, Bob's following statement, made over 20 years ago. "On October 4 I finally made a new world record deadlift record of 700 pounds. At this time I was lifting on normally filled lungs. However, I then started lifting on empty lungs and with a round back - that is I would breathe out to normal, round my back, raise the hips, look down and begin the lift. I feel this is much safer than following the customary advice of the experts. By breathing out you lessen the internal pressure and by lifting with a round back you lessen the leverage - all of which adds many pounds to your lift. I have used the reverse grip and also the overhand hook grip but I have now changed to the palms up or curl grip (with hook) and will experiment with it for a while to see if it helps."

Yet another myth Bob exploded involved the age at which a man could do his best lifting. He was in his prime between the ages of 35 and 42 and set the 725 deadlift record when he was in his 40th year. When he was 55, he was able to regularly deadlift 650 pounds at a bodyweight of approximately 190.

Bob used a great many lifting routines, but most of them revolved around the deadlift. Before his contest against William Boone, Bob did the following workout every day for several weeks:

Another method he used successfully was to work entirely on deadlifts until he felt himself going "stale" at which time he'd switch to the squat until he felt stale again, then switch back to the deadlift.

In general, he favors daily training if you can stand it, low reps working up to heavy singles, lots of partial lifting and supporting work, good nourishing country-style food, and an individualistic and creative approach to training. He suggest that beginners follow these rules as a way to begin, but that that they should feel free to experiment on their own with a variety of exercises and schedules. Bob's a strong advocate of a program of instinctive training built around a good solid core of the basic, heavy lifts.

He was and is more than a great lifter - he's a good man and he's been a good man for a long time now. When we visited him and his wife we stopped down on the main highway to get a drink of water and fill up with gas and the owner of the little country store asked us where we were from. We told him Georgia and that we'd come up to see Bob Peoples. When he heard that he began to tell us about Bob and about how the people of the area felt about him. He finished filling up our tank and as he screwed the cap back in place he turned toward us and said with a smile, "Around here, Bob's spoke of high."