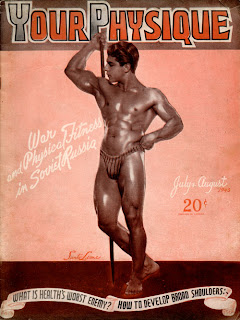 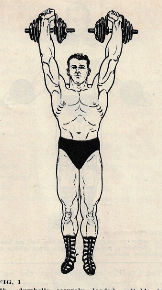 The dumbbells securely loaded suitable to your strength, with the handles revolving freely on the inside of the bar, demonstrate the value of this form of exercise. The hang of the bell on the back of the arms causes the shoulders to be pulled back, promoting full operation of the deltoid muscles.
Figure 2 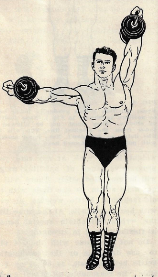 From the overhead position as shown above, lower one arm with the bell carried on the back of the arm. This will lessen the leverage, yet give full action to the muscles. From position shown, allow arm to travel back overhead, and as the arm begins to raise, lower the other arm from the overhead position. Keep arms straight and hand on wrist turned up. Do not sway body sideways. Keep it erect.
Figure 3 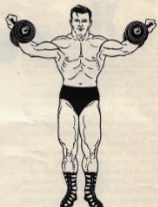 From the overhead position shown in the first illustration, lower both arms simultaneously as shown, into the half bent arm position. Do not straighten the arms. This position permits more weight to be used safely. From bent arm position raise arms overhead to original position. The body must not bend.
Figure 4

In order to carry the bar of the bell on back of forearms, lower the bells from overhead to position shown.
Figure 5 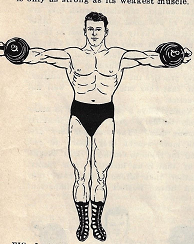 From position shown gradually lower bells to position shown in next illustration. Note position of elbows. They must not be allowed to lower from the original line. You will feel like doing so, but don't. Note hand position with palm turned toward head.
Figure 7

This really is a forearm movement, the upper ram is not supposed to move. When it does, the elbow lowers, which spoils the value of the exercise. Keep arms when lowered in a straight line with the shoulders and return back to original position without dropping the elbows.
Figure 8 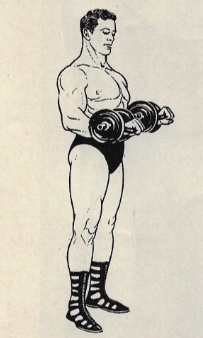 In order to carry the bar of the bells on the forearm, the arms must be lowered from above. Position shown is your starting position. Raise the bells to the shoulders, but do not allow elbows to travel back. Raise and lower several times for biceps and forearm muscles.
Figure 9

From position in Figure 8 raise the bells to position shown. Keep the elbows high, and the hands as shown. It is important in all these exercise positions that the body does not bend backward or sideways. The body must be kept strictly straight.
Figure 10 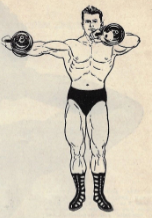 From the position as shown in the previous photo, start this exercise. Allow the right arm to straighten out as shown. Keep the hand turned back on the wrist. After straightening the arm bring it back to the original position, then repeat the movement with the left arm.
Figure 11

Assume position as in Figure 8 and from that position begin to straighten out the arms until they are in position shown. The palms of the hands must be bent back on the wrist. Lower and raise from positions stated, but do not allow the back to bend backward as the inclination will be. Keep the back straight.
Figure 12

You caught it!
I'd like to switch lanes and get a Vic Boff article on Grimek up by tonight, with any luck.Then, maybe a Grimek arm and shoulder article, and then move to some more "current" arm stuff. This crazy stuff is infinite in amount.

Those kettlebell handles are interesting. York still sells 'em too! You need that standard DB handles for them to fit I believe, so it's possible for the handles to fit on the bars. My plan is to get a pair of reg DBs and a pair of the KB handles and try this stuff out!