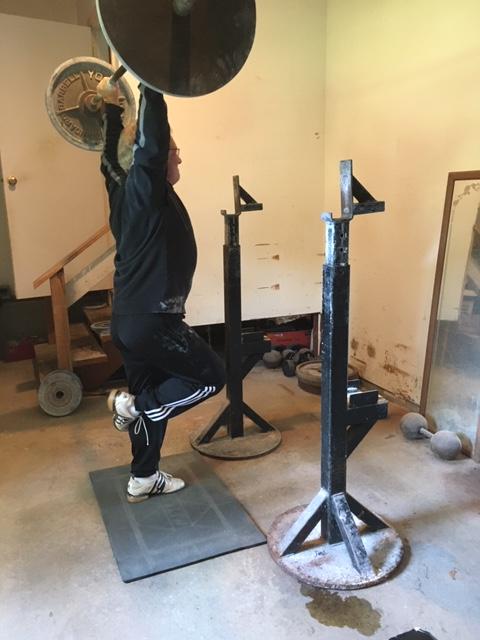 Michael Murphy, age Sixty Six and a Half.
Thank You, Michael!

Originally Published in This Issue
(March 1962)

A preliminary course in bodybuilding is recommended before commencing training on the Olympic lifts. The basic body power building exerises should be stressed.

Squats, deadlifts, press, bench press, high pulls form the nucleus of the preparatory routine and should be performed at the expense of all other exercises.

When a sufficient degree of physical development and bodypower has been developed through these exercises, the trainee can then direct the greater portion of his routine to the performance of the three Olympic lifts.

A common mistake made when first commencing the Olympic lifts is to minimize the importance of correct lifting techniques. Allow me to clarify right now: TECHNIQUE IS MORE IMPORTANT THAN STRENGTH especially when first starting off.

It is disappointing to see so many talented young lifters ruin their careers by concentrating on strength before they have acquired even the smallest degree of lifting technique. The result is almost always the same. They make satisfactory increases in the poundage lifted in the assitance exercises. Naturally they expect to experience corresponding gains in the poundages lifted in the three lifts. Unfortunately this is not the case.

Strength is hightly important, I agree. However, this strength can be utilized only when it is combined with correct technique. This is a hard point to drive home with the beginner, sometimes it is impossible. As a result, many new lifters who possess the potential to become outstanding throw in the towel because of discouragement caused by the lack of gains in their training.

When first commencing training on the three Olympic lifts light poundages should be utilized. Sets of 5 consecutive repettions ar recommended in all the three lifts, the first rep from the floor and four from the hang position. This practice will improve muscular condition, coordination, and technique. Technique is especially improved when performing higher repetitions as a greater degree of form and body positions must be attained to succeed with a lift when in a fatigued position.

It is important that the correct body positions be acquired right from the start. Otherwise any error in the execution of the lifts, if allowed to continue for any period of time, is extremely difficult to remove. A muscle, or muscles, educated to perform in a certain manner eventually do so of their own volition regardless of the lifter's intentions. In other words, it is necessary to have the musles perform automtically (which they do) to lift a record poundage from the floor to overhead.

If one had to think how the lift had to be done during the actual lift, the mind would be concentrating on this instead of the effort put into same. As you can see, this would detract from one's lifting efficiency and eventually from the attainment of championship calibre performance.

Many lifters become discouraged because they feel that they are not making fast enough gains. In the Press, for example, many beginners expect to make a 20 to 30 lb gain in the first month or so. If they could, it would be wonderful and if they continued making such progress they would probably be pressing 500 lbs in no time. If a person could do this it would be exceptional indeed.

Upon looking back over the years I discoverd that my overall gains in the Press averaged 20 poinds PER YEAR. This, I imagine, is comparable to the progress made by men like Davis, Sheppard, Stanko, etc.

A good method for regulating and judging the progress in the three lifts is to set a monthly poundage in the mind (or in the training book). Ascertain a figure that would be satisfactory (and reasonably so) for the entire year (just advance the date one year from the present date) and then divide by twelve. You will be surprised just how little the monthly gains must be to attain your goal. By doing this the overall progress will seem less confusing. When the desired monthly gain in poundage is attained the lifter will automatically know that he is adhering to the set progress schedule. This, I feel, should assist in eliminating disappointment and the resultant desire to discontinue training on the Olympic lifts entirely.

Another common error with the beginner is to overexert with the training poundages. This tends to cause faulty style and technique as the trainee is using mainly strength to succeed with the lift. You just simply can't develop flawless technique etc. by adopting this procedure. In short, develop the style first with lighter poundages. When this is accomplished direct more emphasis on body power.

It is unfortunate that the beginner (in most cases) has to learn the three Olympic lifts more or less on his own. Correct coaching by an experiened weightlifter at the primary stages of training could correct more faults in one training period than the trainee on his own could in several months. It is extremely hard to see one's own errors when lifting, as the concentration is usually directed on getting the bar from the floor to overhead and very little else.

Many young lifters are forced to learn by examining photos of champions in action in weightlifting magazines As things stand this is probably the best way. It is unfortunate that movies showing the champions in actual competition ar not available on the market at present. I am certain that such movies would be invaluable to the weightlifter.

Note: Yes. We are very fortunate now, aren't we.

Weightlifting is one of the most difficult of the sports to master as maximum effort is placed on the body in an extremely short space of time. Because of this it is very hard to coordintate while under such a strain. I have the greatest respect for lifters who can lift world record poundages whilst maintaining stylistic perfection. Only a person who has attempted this can realize what is required to perform such a feat.

In closing I would like to take this opportunity to compliment th great American lifter Norbert Schemansky. In spite of serious injuries with a resultant prolonged layoff from training, this man established himself as one of the greatest heavyweight lifters in history.

Mr. Schemansky, I take my hat off to you.