Both Articles Courtesy of Liam Tweed. 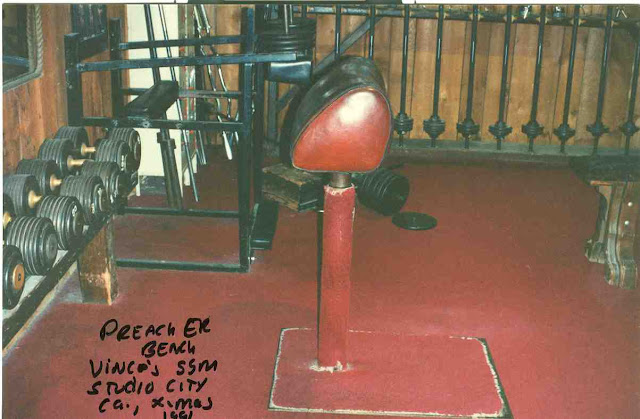 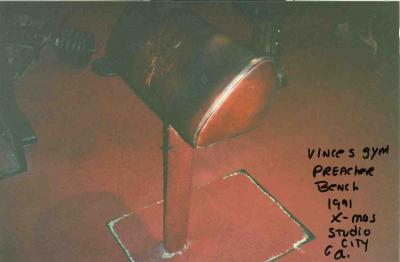 How to Use the Preacher's Stand for Developing Biceps
by Vince Gironda (May, 1970)

Insofar as I am concerned, I have never observed this piece of equipment being used correctly.

First, the preacher's stand is invariably placed too high on the chest. This position allows only the low bicep to work, and Brachialis Anticus, which is a muscle under the low bicep that actually starts the arm to bend, after which the low bicep takes over. This muscle is attached to the forearm and reaches halfway up the upper arm bone. It is responsible for thickness in the low bicep region.

If the preacher's stand is placed so that the top is 3 inches lower than the low pectoral, you can finish the curl properly, which is to lean forward so the high bicep and the Coracobrachialis comes into play.

The high placement of the preacher's stand results in a low maximum bicep and Brachialis pull, but no high bicep and Coracobrachialis development. This produces a flat bicep instead of a round look.

To go further, the outer head of the bicep is developed by placing the elbows in and the hands wide. This position can only be successfully obtained by resting the elbows on a preacher's stand so as to provide a firm placement for the elbows.

The inner head of the bicep is developed by placing the hands close together (3 inches apart) and the elbows 20 inches wide.

Needless to say, the regular hand placement on the bar for the regular preacher's curl is 11 inches apart, with elbows the same width, which develops the center portion of the bicep.

Another hint is to let the barbell roll down to the end of the fingers and then start your curl. As you close your hand start curling by bending your wrist and flexing your forearms.

After you finish as many reps as your strength permits, step back from the preacher's stand and curl the barbell 4 or 5 more reps with elbows well back and the bar as close to the body as possible (drag curl), touching the neck at the top of each rep. This type of burn is superior to half reps with elbows on the preacher's stand, since working extra low bicep and Brachialis you also further work the belly of the bicep, high bicep and Coracobrachialis.

Minimum rest between sets is a must. This is what I call a high tension workout or an honest workout.

Now if you wish to specialize on the biceps, work a maximum of three days a week and pump with lighter poundages two days a week. The common concept of specialization is overwork, and overwork produces muscle tissue loss (catabolism).

The proper number of sets and reps differ with the individual (anywhere from 8 to 15 sets). I personally have never observed anyone grow on more than 15 sets, and as you know, I have trained more champions than any other gym in the world. 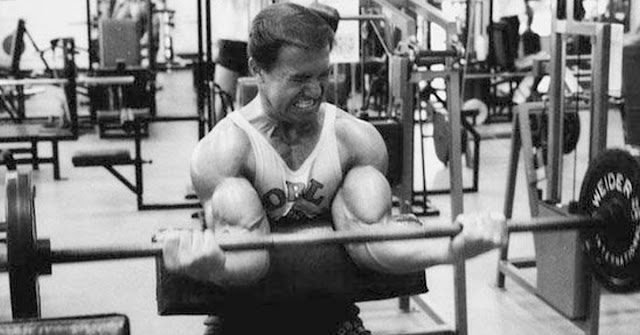 Editor's Note (Peary Rader): In Volume 33 No. 2 of IronMan, another article on this bench and its correct use was written by Scott's early trainer, Vince Gironda, which you may wish to refer to.


Use the Preacher's Bench for Better Biceps
by Larry Scott (January, 1975)

Sitting forlornly in some unused corner of the gym unwanted and ignored is the preacher bench, sometimes known as the Scott bench.

Before I progress any further into this topic, let me be one of the first to assure you I did not invent the bench. Granted, I may have added to its popularity by my overwhelming endorsement, but the creator of its genius lies hidden among many false nominees clamoring for recognition.

I first came into contact with the preacher bench in Studio City, California in a popular little gym known as Vince's Gym. This little beehive of activity has probably been directly or indirectly responsible for more champions than any other gym across the United States.

How well I remember my first contact with Vince and his collection of amazingly effective exercise apparatus. I walked into Vince's Gym fresh from Idaho after having just won "Mr. Idaho." I said, "Hi, my name is Larry Scott." Vince said, "So what." It was not a secret that Vince and I did not have the best of social relations, but we did develop an understanding in sharing training methods.

Don't get the idea I closed my mind to other exercises or new machines. I was always anxious to try new methods. Each Saturday, which was my experimenting night, I would try some of the new ideas and exercises I had seen during the week. If they were good, I would store them away for use when some exercise in my present routine went flat. If they were no good, I would discard them. However, there was never anything which worked as well as the preacher bench.

I well remember the time Vince received his first curling machine. You know, the kind with the selectable weights and the cable going up to the large cam to which the actual bar was attached? We all envisioned gigantic arms overnight. If the preacher bench was good with free hand barbells and dumbbells, then the machine with all its pulleys and cables would be twice as good, we reasoned. Besides, it was new and that had to make it better. We were all getting the jump on the boys over at Gold's Gym, we gleefully concluded. Try as we might, with ever conceivable combination of sets and reps, elbow position, even leg position, it just didn't have it.

In theory, the constant tension on the bicep using the machine should have produced excellent results. In practice it was no good, at least not as good as the good old preacher bench. This certainly opened my eyes as to the value of the actual movement itself. The very thing for which we scorned the preacher bench was its greatest asset:

The preacher bench would not apply constant tension. The bulk of the work was done at the bottom, and the top was actually a rest point.

The preacher bench is a perfect example of super specialization. We all know of the importance of isolating the muscle we are working to obtain the greatest possible gains from the exercise. The more specialized the, the more concentrated the effort.

For example, no one does Clean & Press anymore to build shoulder or biceps or triceps. But this movement does work all these areas. However, this used to be a very popular movement in the programs illustrated years ago. By specializing on each individual area, we have realized much greater growth and thus we see continued improvement in physiques.

The curling machine, of Nautilus, whatever one would call it, works the entire bicep and if this was all you had to work with it would be excellent, but it isn't. So we specialize by doing preacher curls with dumbbells.

What a great movement! This exercise puts all the stress on the lower bicep. No need to have a bicep anymore that looks like a knotted sock. Personally, I have always enjoyed the physique which would be appealing to the avid bodybuilder, but not repulsive to Mr. and Mrs. Average American. I grant you, some are repulsed by anything above 150 pounds, but on the whole, the super physique can be a super pleasant physique.

One of the most attention getting areas is the arms. A full sweeping bicep neatly tucked under the forearm rather than bluntly ending leaving a large gap between bicep and forearm will add considerable aesthetic appeal to your arm. [Yes, the aesthetics within nature can lead to theism, and that ain't just scramblin' letters, Buddy.]

I will be one of the first to agree, we can't all have the same shaped bicep muscle nor would we want to, but there are some ideal proportions for which we should strive.

Years ago I was selling newspapers in Pocatello, Idaho, walking in and out of the stores on Main Street, trying to find people interested in trading a nickel for one of my papers. I remember a sporting goods store in which the owners never bought any papers, but I loved to look at all the neat guns and bows. One day upon entering the store, I was attracted to some new exercise equipment they had put on display. They had barbells, and cables, and rowing machines, but the thing that really caught my eye was the chest cables. Actually, they were springs which you pull across the chest which doesn't build the chest at all. If didn't matter what they claimed, the illustrations showing the use of the equipment was astounding. An artist's creation had the springs stretched across the chest with one arm extended and the other one just starting to extend. The extended arm had the most amazing lower bicep I had ever seen anywhere. At the time, I didn't know the difference between upper and lower bicep, I was doing good to tell the difference between bicep and tricep. But I still have that picture of the arm branded on my brain. It's only after having learned more that I am able to identify why that drawing excited me so much. It thrilled me to see such a tremendous accumulation of muscle tissue. To make it even more exciting, his arm was not flexed, it was extended. I must have stood in awe over that illustration for 15 minutes. Each day I would return just to feel that same wonder. How good it must have feel to have an arm so impressive.

Certainly, that is the controlling factor in selecting as my favorite pose the side with arm extended. It still thrills me to see massiveness on an arm or any other body part in a position where no one would normally expect to see it.

The preacher bench when used properly is the greatest piece of equipment for building beautiful biceps anyone has come up with to date. The curling machine, however, is excellent for building the top of ther forearm when doing reverse curls.

Some may not agree with my thoughts, but there are many different paths to the top. I would suggest you give strong consideration to lower biceps development.

It's great fun, exciting, and fills you with a breathless kind of wonder as you see your arm filling in where no one else's does. Your competitors will look at you in puzzlement trying to discover why your physique has that special awe to it that theirs lack. The judges will attribute it to muscle shape and balance, but you will know

it all belongs to agony and the preacher bench.