Originally Published in This Issue (November 1968) 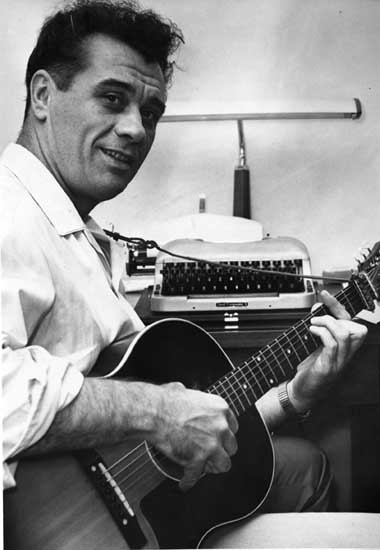 There's a kid on our block who plays rhythm guitar in a little rock and roll group. He's got definite ideas about music.

We got to talking about guitars and guitarists one day. "What about Peter Yarrow?' I asked him.

He gave me a blank look.

"And like who," he said, "are Peter Yarrow and Paul Snooky?"

"Stooky," I said. 'Paul Stooky. They're two-thirds of Peter, Paul, and Mary."

That's what the Beatles call them."

"Never mind about the Beatles," I said. "What do you think about Stooky and Yarrow?"

"Old fashioned? What are you talking about?"

"So what. Guitars don't have to be electric to be well played."

"Dad," he said. "It's like nowhere. The flat top box went out with the Keystone Cops. They're old fashioned."

About six months later, Peter, Paul, and Mary came to town for a concert. I bought two front row seats and talked the kid into going with me.

It was their third number that got him.

It's a thing called "A-Soulin'" They start quietly with Paul picking the melody. Halfway through the introduction, Peter comes in with some nice clean syncopation and they start building on it.

I looked at the kid. He was watching intently.

The vocal part starts and Stooky and Yarrow increase the volume. They're working all around the melody and the notes are rippling out and you can feel the crowd picking it up. It's an absolutely perfect display of guitar virtuosity. They hammer up to the finale and chop it off clean. You can hear the guitars ringing for a split second and then the audience explodes.

I looked at the kid again and he's clapping loudest of all. I leaned over and shouted in his ear. "Old fashioned?"

There's a thing these days (and these days too) about being modern. It's a hang-up, really (I woulda went with the F-up selection myself). It doesn't seem to matter if a thing is good or bad, just so long as it's not old fashioned. It doesn't matter how goofy you look in your 'new' clothing, at least it's new.

The whole concept, of course, is crazy. If a thing is good, then it's good and it doesn't matter how old it is. Hey, this ain't me writing this stuff . . . it's McCallum . . . but it sure sounds identical to what's in my head most of the time.

About 20 years ago (in the 40's), a foolproof method of bulking was discovered. And yet gaining weight is a major problem with a lot of lifters today because the old method somehow got lost in the shuffle. It's too bad, because gaining weight is really no problem. Bulking up is far and away the easiest part of bodybuilding.

If you want to make use of some old gold and really apply yourself, you can gain lots of weight. If you want to quit scratching around for something new for a couple of months, you can get as bulky as you want.

Let's review the old method, and then we'll outline a program for you.

We can sum up the essentials very quickly.

Squats and milk. That's the gist of it. Heavy squats and lots of milk and never mind how old the method is.

Here McCallum spends some time on the Get Big Drink. You can find out what that is all over the internet without me spoon feeding it to you. There's also lots of similar concoctions you can find if you want to.

You should start your program with a BRIEF warmup. Spend about five minutes bending and twisting, doing light repetition snatches or cleans, situps, running on the spot,  and so on. Don't wear yourself out in the warmup, just get your blood moving, get a good feeling about what's to come, and get your head into it.

Your first exercise is the press behind neck. Do 3 sets of 12 reps. Don't frightened by the relatively high reps, and don't be stampeded into using low rep stuff. The value of low reps has been greatly exaggerated when it comes to bulking. Moderately high reps, properly used, provide umpteen times the growth stimulation, and are so much better for your health that comparisons become ridiculous.

Do the presses behind the neck in strict style with a medium grip. Work hard on them and try to force the poundage way up. There's no use kidding yourself on this or any other exercise. If you use baby sized weights, then you can expect baby sized muscles. It's as simple as that and there's no way out of it.

If you want respectable deltoid, trapezius, and triceps development, then you've got to work up to about 3/4 of your bodyweight for the twelve reps. That means 120 pounds for a 160 pound man; 150 for a 200-pounder. Nothing else will do. If you think it will, forget it.

The biggest fallacy in weight training today (and today too) is the foisted notion that you can build big powerful muscles without hard work on heavy weights. You can't do it, and you're wasting your time trying.

If you're not gaining like you should, GIVE YOUR TRAINING POUNDAGES A LONG HARD LOOK. The fault may be entirely yours.

Take a short rest after the presses. The next exercise is the big one, the KEY to the whole thing, the SQUAT. You'll do one set of 20 reps, in puff and pant style, with all the weight you can handle.

Just take my word for it. 20 rep squats are the solution to everybody's weight gaining problem. They'll stimulate all the growth you want IF YOU WORK HARD ENOUGH ON THEM.

Warm up with a few warmup sets to get your head on right and then start right in on the heavy stuff.

Take three huge gulping breaths between each rep. Hold the last big breath and squat. Blast out the air violently as you come erect.

Hold your head up and keep your back as flat as possible.

You should use a weight so heavy that the last five reps are doubtful. I continually get letters from trainees complaining about their slow gains in bodyweight. Eventually I find out they're using weights in the squat that an old lady with arthritis could lift.

You've got to FORCE THE POUNDAGE. 150% of your bodyweight is rock bottom minimum. That means 240 for a 160 pound man. 300 for a 200-pounder. And remember, that's a minimum goal figure. You should figure on going well above that.

As soon as you finish the squats, do 20 pullovers with a light weight. 20 pounds or so is plenty. All you're after is a good rib box stretch.

The next exercise is the bench press. It gets enough publicity so you won't be needing any special instruction on it. Do 3 x 12 in a rather loose style.

Next if bentover barbell rowing. 3 x 15 in very strict style. Rest your forehead on a block or lean it against a post or something to make sure you don't cheat. Use a medium grip and pull the bar to your lower abdomen.

The next exercise is the stiff-legged deadlift. 1 set of 15. Do the deadlifts standing on a bench or high block so that you can go all the way down without the plates hitting the floor. Concentrate on full extension and contraction of your lower back.

Don't set the weight down when you finish the 15th rep. Stand erect and do shoulder shrugs until your grip gives out. You should be able to get at least a dozen shrugs out of it.

Do another set of light pullovers, 20 reps, after the deadlifts and shrugs.

Work hard on all the exercises, and work to your limit on the squats. Take in enough food to bulk up. Get lots of rest and sleep. Maintain a calm, tranquil mind and start saving your money. You'll need it to buy bigger clothes.