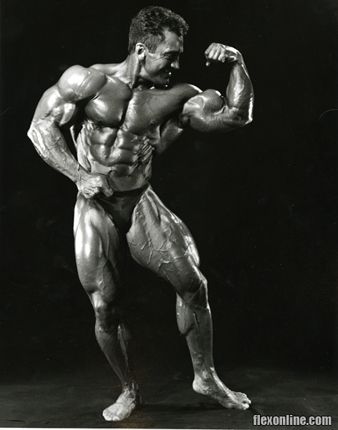 I know what you're thinking . . . yet another training article. Lee Labrada does so many sets and so many reps and gets great shoulders. Big Deal!

Well, not exactly. This is a training article. I'm going to tell you exactly what Lee does every Monday and Thursday when he trains shoulders. But more importantly, I'll tell you WHY he trains the way he does.

Since the shoulder is so mobile and vulnerable to injury, Lee takes special care when training this body part. He warms up his shoulders with a very light weight for a few high-rep sets in all ranges of motion. The reps are done slowly and under complete control at all times, starting with half movements. He follows this with some gentle stretching, again in all ranges of motion. Lee attributes the fact that he has never had a shoulder injury to this simple warmup.

Lee also cautions against overworking this relatively small muscle group, which is also directly involved any time back and chest are trained.

He usually follows a four-day split routine, whether preparing for competition or not. Every Monday and Thursday Lee trains shoulders along with chest and triceps, the order being chest -> shoulders -> triceps. In the past, shoulders were usually trained first, but this resulted in tired, weakened shoulders and low intensity chest training.

The delt work itself is limited to 10 very intense sets.

Lee does the first work set of each exercise with the heaviest weight possible, starting with side laterals performed bilaterally (both arms at once) with dumbbells. He begins with this exercise, as opposed to a form of overhead pressing, because he achieves a better pump, which in turn helps him to mentally focus on his delts. Side laterals rarely result in sore shoulders for Lee, and this movement pre-fatigues his delts and preserves his triceps for the work to come later in the session. Decreasing the weight each set, he performs 2-3 sets of 8-12 reps. He does these sets at a fast pace because this generates a pump that he can maintain throughout the course of the workout. His form is relatively strict, and he raises the dumbbells about six inches above parallel, since going much higher doesn't increase deltoid activity. He finds "running the rack" also gives an excellent pump, and uses this technique frequently on the side laterals. These are extended sets of around 50 total reps performed in rapid succession, repeated twice.

Going Down the Rack:
- Start with the heaviest set of dumbbells you can handle for the chosen rep numbers, and work down the rack in 10-lb. jumps with little or no rest between sets.

Behind the Neck Presses for 2-3 sets of 8-12 reps are next. These are 3/4 reps, not locked out. This helps to keep constant tension on the deltoids. It also avoids nonproductive movement and tiring the triceps. Lee's grip is slightly wider than shoulder width here, and he tries to keep his elbows back. To increase the activity of the rear delts, he sometimes does dumbbell presses with the dumbbells being rotated into each other. Lee prefers to perform presses seated, wearing a belt; however, people with back issues may feel less discomfort if they stand.

After just enough rest to catch some air, he doe 2-3 sets of 12-15 reps of Rear Lateral Raises while sitting on the end of a bench, leaning forward with his chest pressed tightly against his thighs. Lee prefers to use dumbbells (not cables) with his arms out 90 degrees from his body. He raises the dumbbells just above parallel and bends his elbows only slightly. Just recently Lee began working his rear delts lying face down on an incline bench. In this position, he performs rear laterals alternately with his arms 90 degrees from his body and then almost directly to the front, like a front lateral raise. When performed in the manner, the leverage is such that a great deal of stress is transferred to the rear delt, which can be a difficult area to isolate.

Finally, he does a set or two of trap work in the form of shrugs, using a straight bar with the help of wrist straps. Lee really started concentrating on these a few years ago, with good results. These are normally burnout sets, rarely using more than 315 pounds. We both feel that the most effective way to perform shrugs is to keep the head down and shrug the weight straight up, hold for a second, relax, and momentarily stretch at the bottom. This is designed to bomb the upper traps, which raise the scapula. Therefore, fancy rolling motions waste energy, put more stress than necessary on A-C joints, and are not the most effective way to work middle and lower traps.

No high pulls? Nope, they are a very specific exercise, because they work traps and front delts - or even lateral delts - depending on how your elbows move. Inefficient. They are pretty good to pump up the areas though.

Lee doesn't use forced reps. He chooses instead to work to momentary failure. He's especially careful when dieting, since he doesn't have the nutritional reserve to recuperate rapidly. "In the past I've done a lot of forced reps, but I just didn't get the results and started getting achy," Lee says.

To stimulate muscle growth, it is essential to increase intensity. You can do this by increasing the weight, using the same weight for more reps/sets, or by using the same weight and doing the total work in a shorter period of time. "Increasing poundage is important, but the feel of the movement is even more important. I accentuate the negative portion of the movement more on shoulders than on any other body part. In this way I can increase the intensity with safer poundages," Lee points out.

There you have it - plain, simple, yet effective. Remember, you are attempting to create a work of art, and overdeveloped front delts can be a problem, aesthetically and in other ways as well. Form is critical, since improper form actually decreases the efficiency and desired intensity of the movements, and also increases the chance of injury. Avoid bouncing, since this creates extreme stress on the joints, even with light weights.