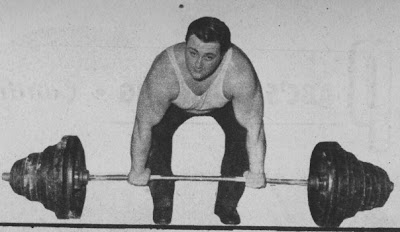 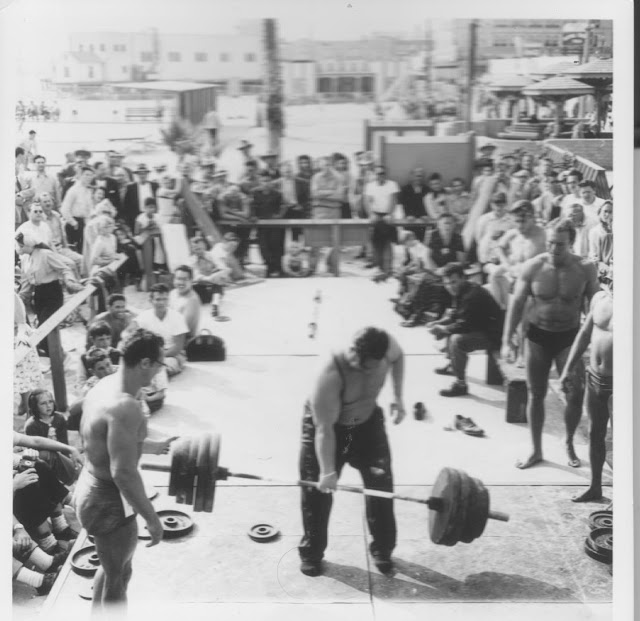 Overall Body Power: Key to Weightlifting Success
by Doug Hepburn, as told to Charles A. Smith (1954)

Just after I had won the world's heavyweight lifting championship in Stockholm last August, a famous American authority approached me, and among other things, asked me what I thought was the most important factor in lifting success. My reply consisted of two words:

His expression clearly showed that he did not agree with me, so I went on to explain why I thought the development of sheer strength was important. 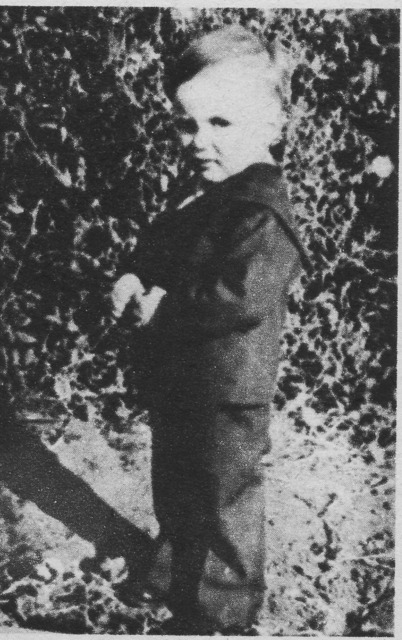 Above and Below: Doug Hepburn 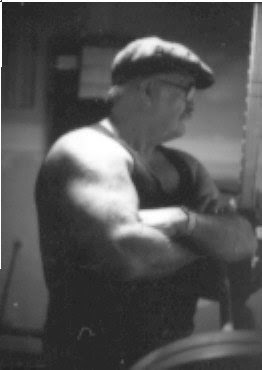 So far as I am concerned, the success or failure of a lifter depends solely on the amount of basic body power he is able to develop. Don't misunderstand me, I agree that technical lifting skill is important too, but I feel both I and Paul Anderson have proven that given enough basic body power any man, even with a crude style, can and WILL defeat a less strong yet more skilled opponent.

If you ask why John Davis managed to to so long without being beaten in International and National competitions, when there were men who had more basic body power than he . . . the answer is simple. It is because John Davis was that very rare combination of power and science.

Davis realized early in his career that strength development shared at least equal importance with lifting skill, and used the Squat and Deadlift (I am informed) extensively. And I state without hesitation that if John had not used these two fundamental exercises he would never have raised the world total to the magnificent heights of 1063-1/4 pounds.

In the final analysis, lifting success depends on the power of the entire back and thighs; so the deep knee bend and the two hands or one hand deadlift are vitally essential to a lifter if he wants to get as strong as possible in these muscle areas. Even the bodybuilder has to rely on these movements for maximum muscularity development of legs and back, and as components of any weight gaining schedule. So no matter how you look at it, the facts are plain. Any serious lifter or bodybuilder who desires to perform at higher levels in the World of Weights must practice the Squat and Deadlift.

While this is not a bodybuilding article, but concerned only with the use of the squat, deadlift, and one arm deadlift for developing Olympic lifting strength, the physique contest entrant can use the information contained herein with great benefit. He will find that the act of supporting heavy poundages across the shoulders, or holding them in his hands, will not only build up the back and legs, but thicken the shoulder muscles and pack the grip with POWER.

Most readers know that I have always used the deep knee bend, a.k.a. the Squat. And whenever I had time I also specialized on the dead lift.

My experience has been that one helped the other. If I increase my training poundage in the squat, the next time I went to the deadlift I found that it had improved too. The reason for this is not hard to figure out. Both movements influence the same muscle groups, and largest and most powerful in the human body.

In the squat, because of body angle strain comes on the back when a certain stage of recovering from the low position is reached - therefore any degree of strength gained through deadlifting is also power gained for the squat.

In the deadlift, the thighs have to handle a heavy poundage at the start when they are in "parallel position" - therefore the power built up with squatting is also power gained for deadlifting.

More proof in favor of these two body power builders and the way they improve your quick lifts can be provided through my own experiences. With little technique in cleaning and jerking I officially made many formidable lifts, in spite of my handicap and inability to properly assume and hold the most desirable lifting positions. 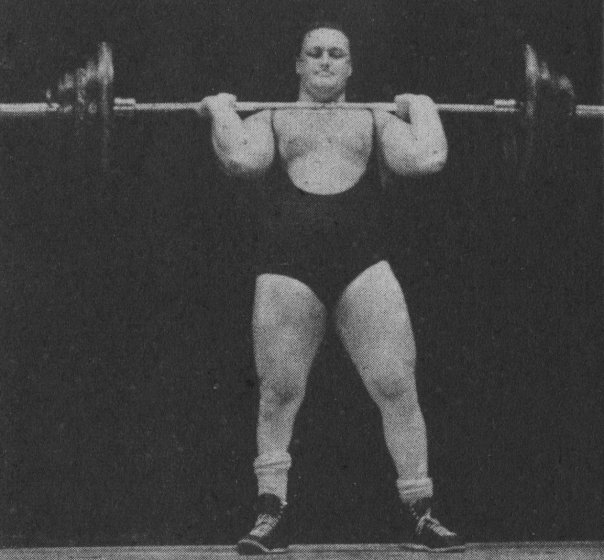 I had to rely on the power I gained from squats and deadlifts. I can go even further and instance men like Maurice Jones, Louis Abele, and Steve Stanko, who were all men of great strength and who all used these wonderful basic power movements.

Let's get on to some practical instruction. To get the utmost benefit from the two movements, they must be used in a position that closely resembles that of the quick (or other) lift you are attempting to improve. Suppose you are using the deep knee bend to pack your clean with power. Your feet should be placed in the same position used for cleaning, and the movement performed with as much 'snap' and speed as possible. You should aim to develop the same forceful drive and explosive power used in the clean.

You can, of course, place a thick board under your heels and drop down into a deeper position, thus working the muscles over a more complete range. This will also enable you to keep better balance, put more work on the thighs and less on the lower back; however, my personal recommendation is that you try and perform the squat as you do the clean: flat footed.

A system of progressive repetitions is best because it will enable you to use the maximum amount of weight suitable for developing great power. Start off with 5 sets of 3 reps, gradually adding a rep when you are able, until you are performing 5 sets of 5 reps. Then add 10 pounds, drop back down to 5 x 3, and work up to 5 x 5 again.

Here are tips for keeping your balance. Always face a wall when squatting and never look down at the floor when coming up with the weight, otherwise there is a tendency to tilt forward and a bad lower back strain will result. Keep your gaze fixed on an eye level spot on the wall, and remember that the position of your head controls your balance. Make sure you perform the exercise correctly.

There is a definite connection between strength in snatching and cleaning, and dead lift power, and I believe the latter can be used by the Olympic man to increase his quick lifts. This does not mean that just because a man can dead lift 700 pounds he should be able to clean 400. Some men are outstanding in the dead lift, just as others are outstanding in the clean, but it is hard to strike a proportion between two. However, it is worthy of note that both John Davis and Charles Rigoulot lifter great dead lift poundages, and both were outstanding cleaners. Others who share these abilities are Hermann Goerner and Paul Anderson.

Ernest Cadine
1893 - 1978
In my opinion, the main advantage to dead lifting for Olympic Power development is PSYCHOLOGICAL, in that it develops not only physical strength but MENTAL POWER . . . a contempt for the heaviest poundages. You will have to agree that if you handle 500 or more pounds in the two hands dead lift, a 300 pound barbell is going to feel relatively light in your hands when pulling it off the floor at the commencement of the clean. [The one hand deadlift is also very effective in making a two handed lift feel 'light' in comparison.]

And herein lies the secret of using the two hands dead lift for cleaning and snatching strength. It is easy for you to grasp the important connection between the clean and the dead lift: when you observe that the hand placements of each are almost identical. For this purpose we are speaking of the two hands dead lift should be performed with your regular cleaning grip, the feet in the same position as in the clean, and pulled up with as much explosive force and at the same speed in the initial stages.

Position at the bar should be the same as the clean . . . back flat, shins up to the bar, eyes looking forward and head up. You can use the hook grip if this causes no discomfort, but it will be found that he actual practice of the exercise will strengthen the hands and fingers, a vital necessity when cleaning heavy poundages. It has been said that a chain is only as strong as its weakest link. So if you can't hold a weight, you can't lift it. If you grip is weak, your back and thighs cannot be put to effective use. One common mistake in dead lifting is to perform the exercise with the legs practically straight. Not only does this throw too much strain on the lower back, but it will not build muscular coordination. Remember that you are training for maximum muscular efficiency, therefore you must make sure not to use any movement that will defeat this purpose. In the clean the legs and back coordinate to tear the weight off the floor and the dead lift must be used in exactly the same manner . . . a drive with both legs and the back muscles.

Start off with 5 sets of 5 reps and gradually work up to 5 sets of 8, increasing the weight at this point and dropping down to 5 sets of 5 again. Start off the floor, just as in the first stages of the clean. Or, alternately, you can lower the bar to just above the ground, never letting the stress off the lower back, grip, and legs. In the last repetition of each set shrug the shoulders as high as you can before lowering the weight to the ground.

It is not advisable use both he squat and the dead lift in the same workout. And it must always be remembered that these movements are not meant to take the place of any lift, but are assistance exercises. So first go through with your Olympic lift training routine, then use either the squat or the deadlift.

You can alternate the squat and deadlift workout for workout, or else spend a definite period of not less than a week on each. If you prolong the use of either movement, train with it until you show signs of slowing up in poundage, the switch to the other exercise. Both the dead lift and the squat are extremely strenuous, and since your legs and back will already have had a good workout with the Olympic lifts, you will readily see why both should not be used in the same training period. Staleness can result if they are.

It isn't necessary to keep to the ordinary squat or dead lift. Vary both exercise forms, performing half squats, quarter squats, bench squats, and front squats. Vary the dead lift forms too, using the snatch grip spacing, clean hand spacing, taking the weight off of boxes to shorten the range of motion, or deadlifting while standing on a block to extend the range of motion.

You are certain of one thing from the practice of using the squat and dead lift as Olympic lift assistance exercises - MORE POWER. If you already have the style, there's only one way you can increase your individual lifts and total, and that is by becoming stronger. Both the dead lift and the deep knee bend (and their variations) can give you that strength.