Originally Published in This Issue (December 1960) Ever since I began answering problems relating to training, I noticed that the one problem that the bodybuilder never loses any interest in is the arms. Questions relating to this part of the body are always plentiful. It seems everyone is interested in acquiring a pair of bigger and stronger arms. In fact, it seems to be a foregone conclusion that the desire to obtain stronger and mightier arms has been responsible to many fellows taking up weight training when young.

On the other hand, the seasoned men, many of whom have used weights for years, still continue to place emphasis on the movements that work the arms. And though a large percentage of these men have achieved heavier and stronger arms, there are always a few failures or dissatisfied participants who can't seem to make the grade . . . and in the bodybuilding field there are always a few of these.

Those who have failed in their quest to obtain stronger and bigger arms invariably feel that they are not doing the right exercises or, perhaps, not following the right training method. Others are enveloped with the thought that there must be some kind of secret involved and feel that those who possess such knowledge refuse to reveal it or share it with others.

This, of course, is erroneous at least where Strength & Health magazine is concerned. Strength & Health has always featured the best training programs of all the outstanding men in the bodybuilding and weightlifting field. These men have, as past issues of this magazine will prove, revealed their most inner training secrets. I know this to be a fact, judging from the large number of letters I get from those who have improved by the sensible advice we offer in these pages . . . and that is proof enough for us!

For the record, however, I personally will concede the point that there is a kind of secret involved, but tit's not a closed secret as those who failed to register improvement might think. This secret is nothing more than selecting for use the right exercises that will activate the muscles which you are trying to develop . . . and then training sensibly and with some degree of regularity. This, however, doesn't mean that you should overtrain or start using excessive sets of each exercise, which is what some inexperienced fellows are apt to do when they reach the stage of arrested improvement. And often, even after they follow a stepped-up version of their training program in hopes of overcoming their sticking point, they are more disgusted when they fail in their efforts. So obviously multiple sets are not the answer. 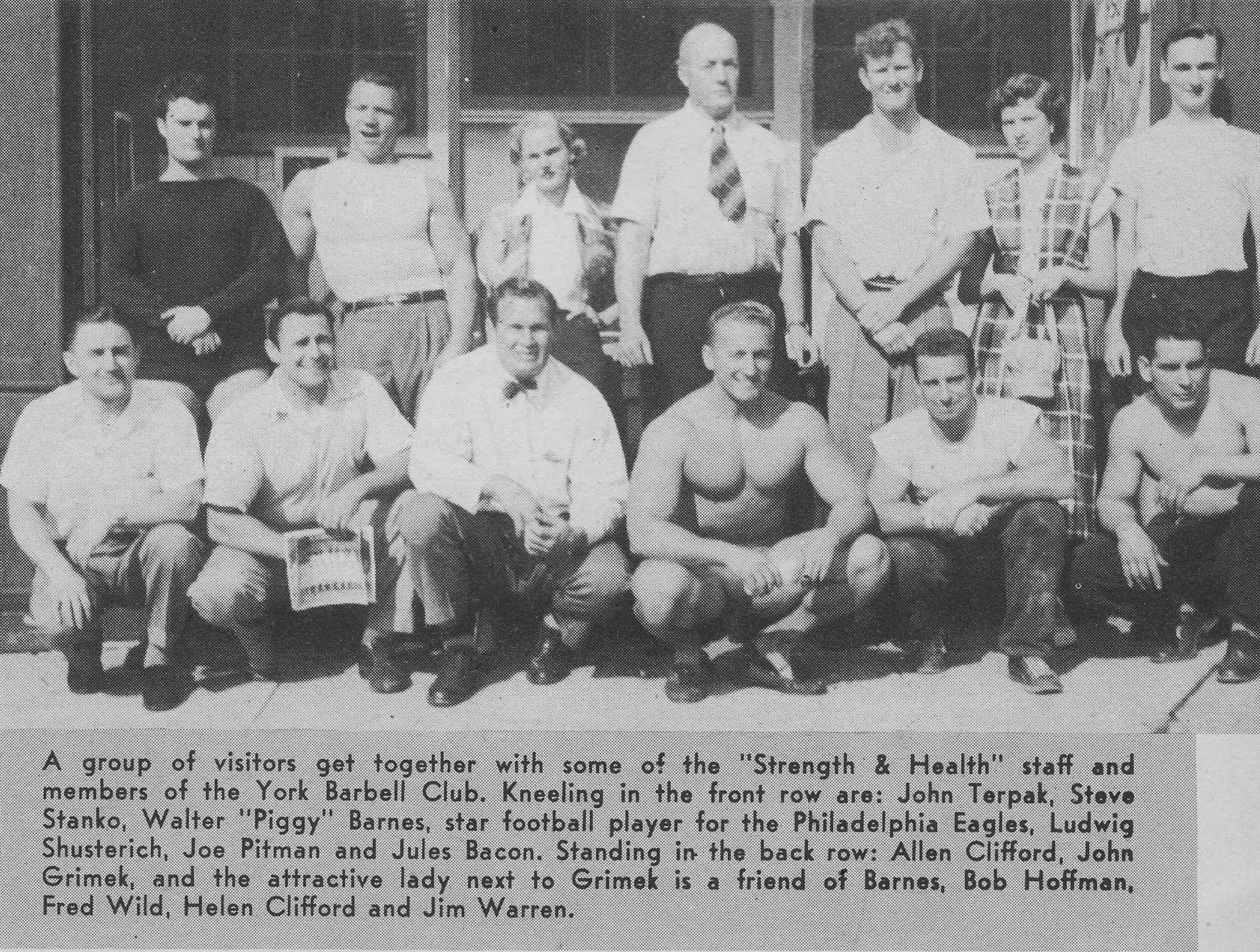 Another common error many bodybuilders make in trying to develop bigger arms is to follow an arm specializing program long before their muscles are capable of handling it. On top of that they tend to direct all their efforts towards developing only the biceps part of the arm, ignoring the obvious fact that the triceps make up the largest part of the arms and should not be neglected if maximum size is desired.

Combination training for developing the arms consists of a variety of exercises, including several movements for the shoulders and forearms which tie in directly with arm development. It is very possible that the combination of arm, shoulder and forearm exercises proposed here might solve any arm developing problem you might have.

As a matter of interest, when I first mentioned (some twenty years ago) the importance of combining forearm and shoulder training for combining maximum arm development, I was besieged with hundreds of letters for more details. Almost everyone accepted this theory, but one self-styled authority (who has since given up participating in the iron game) inferred that this was merely a personal and untried theory. He ignored the results that I had obtained from its use, and years later when many others began to use this method of training and got good results, others sought to claim the credit for this success.

The credit, I'm inclined to think, is due to the manner in which the fellows do their training, which includes more exercises and a greater variety for arm development. Of course, the real credit should go to the late Alan Calvert who hinted about this in his book Super Strength, published in the early 1920s.

In those days bodybuilders had their problems, too, and I was among that lot. 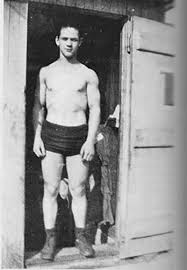 An Early Photo of John Grimek 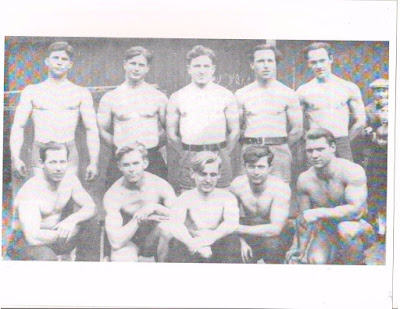 Unfortunately, there was no one to turn to for training advice then, and those who possessed such knowledge were either too busy or else guarded the secret and sold you a training course. This left the confused bodybuilder all the more confused and to search for the answers to the best of his ability.

When I first reached my sticking point I was determined to learn the reasons. My arms at this time measured 15.25 inches and refused to grow no matter which method of training or exercises I employed. This left me with no alternative but to figure things out from the bottom.

I started by getting a complete anatomical book (hint, hint) with the purpose of acquainting myself with how the muscles worked, and the best way to work them. From this study I was able to deduce the type of work needed to exercise the muscles and then use them to advantage in my training.

I remember the big surprise I got when my arms increased to 16.5 inches within six weeks of this training. But, I also remember that the next half inch took me almost twice as long to gain, and after that it was even a slower grind. But muscles tend to grow faster when they are first trained properly, then begin to slow down and show improvement very gradually. So don't expect to show improvement as you do at first. Many things are involved in the process and all individuals vary in this connection. So be contented to make progress however slow . . . just so some progress is being made.

There are other factors which have helped the American bodybuilder to develop larger and more impressive arms. Fellows today aren't afraid to train hard, as they were some years ago. In the past most fellows who trained with weights were afraid of developing their muscles to the extent of becoming musclebound, a mythical condition that had plagued all those who ever touched a barbell. But in all the years that weight training and weightlifting have been known, never once was there any proof that sensible weight training has had any adverse effects upon the body or the muscles. And in recent years everyone is familiar with the knowledge how many a star athlete became a better athlete because he employed weight training.

Of course the modern approach to body developing is to include an ample supply of high grade protein along with properly directed exercises. This combination has resulted in better physiques and huskier looking arms, especially when training for the forearms and deltoids were included in an arm training program.

Though I am not impressed by measurements, I feel a word about measurements might be proper here. Measurements are important to any novice who is following a weight training program. They can indicate his physical progress. But to the more experienced man whose measurements have improved, measurements are useless. Moreover, it's always difficult to determine which measurements are honest and those which are exaggerated. Most of the measurements today are grossly exaggerated and have no factual basis, and so must be taken as such.

The bodybuilder should strive for an appealing combination of muscular bulk and shape . . . letting the girth part take care of itself. But if you want to take an honest set of measurements, try taking them as son as you get out of bed in the morning. There will be considerable difference from those taken at this time and those you take after a workout . . . as you will learn.

In preparation for the 1949 Mr. USA contest I followed a training program for my arms similar to what I am revealing here, using this program after my regular training. I managed to acquire massive arms for this event and did win the competition.

However, I do not know what they measured at this time, but probably as large as they ever were. I didn't experience any trouble in bulking them up. But a glance at the photos used here will show that my deltoids and forearms also got heavier. I also admit I trained vigorously at this time, but I knew my capacity and avoided any overtraining. This is the point which most bodybuilders are unable to determine for themselves, consequently they are apt to do too much or not enough, and this can hinder progress.

The key to super arm development, in my opinion, is to exercise the entire arm assembly: the biceps, triceps, shoulders, and forearms. Keep in mind, of course, that the biceps are not only fastened in the crook of the arm, but the tendons run deep and long into the forearms. And the same thing happens at the shoulder where they insert and attach to the scapulae.

The triceps also has a similar long-range attachment, which pointedly proves the necessity of working the forearm and deltoid muscles with as much gusto as you would the biceps or triceps. If you have any doubts, consult any good anatomical chart and trace these muscles (anatomy book, second hint). Seek out their starting place and follow it to where they merge and you'll have a clearer idea of how they function and how then can be exercised to advantage.

Below is a training program that should prove effective for arm development:

If you work hard on each of these exercises with appropriate weight, there is no need to repeat any of them in 'set' form. Of course there are other exercises that are equally as good, some of which you may want to substitute for those I have listed. But don't keep adding more and more exercises to those already listed unless you are capable of doing them without exhausting yourself. One plan is to use them alternately thereby breaking up the monotony.

Use a poundage in each exercise that will tax and put a little strain on the muscles by the time you complete the required amount of repetitions. But avoid a weight that causes you to strain from the start.

Exercise 9, 10, and 11 (the three done for 6-8 reps) are best done with heavier weights to work the muscles for more power. They also help to force a thorough contraction, but only when enough repetitions have been done previously.

The One Arm Press does not have to be done in strict military fashion; instead, allow the body to bend towards one side as the weight is pushed up. When limit poundages are used it affects the shoulders AND triceps very strongly.

Repeat the windup on the wrist roller as many times as you feel you can, but try to concentrate on accomplishing three repetitions each way - winding it away from you, and then winding it towards you. Be sure the action comes from your wrists and not from your body or shoulders, otherwise the exercise loses its effectiveness.

If you find this group of exercises too much for you to do when you first begin, include only those which you feel are important to you. Then add the others as you feel the need and ability to handle additional training. In this way you can be assured of steady progress and show better arm development than you ever dreamed possible. 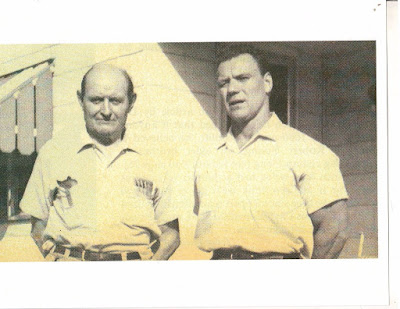