Originally Published in This Issue (July 1967)

Every so often we have to come back to the basics. Technique, it seems, outstrips performance. New discoveries pile upon old. Claims beget counterclaims. John Doe develops the ultimate training system and Sam Smith improves on it. Super-duper programs - long, low, improved models - hit the scent in blinding succession till the trainee stands astounded, blinded by the brilliance of it all.

And going, as a rule, absolutely nowhere.

He becomes unable, as they say, to see the forest for the trees. He loses sight of several basic truths. Like the careless climber he gets snowed under, buried by an avalanche of confusing information.

A friend asked me about it the other day. He struggled in with a big cardboard box and dropped it on the floor. Dishes rattled in the cupboard.

He straightened up and wiped sweat out of his eyes. "It's books."

"You better take them back," I said. "The library'll be anxious."

He opened the box. "It's magazines, actually." He started stacking them on the floor. "Muscle magazines."

"Well, okay," I said. "You can burn them out back, but if the fire Marshall comes in I gotta pretend I don't know you."

He gave me a disgusted look. "For goodness sake, I don't wanna burn them. I want you to go through them with me."

I looked at him in horror. "All of them?"

"Because," he said, "somewhere in that stack of literature is a training program that'll put muscle on me. It's just a matter of finding it."

"Sammy," I said. "Just keep packing them around. That load'd build biceps on a Percheron."

"Look!" He pointed to the magazines. "I been collecting those for years. They're fulla information. Right?"

Okay," he said. "Then the solution for me is buried in there. Somewhere in all that mess or words."

I laughed at him. "Sam, I can sum up the solution for you in a lot less words than that. In two, to be exact."

He looked disappointed. "I know all about hard work."

"Sammy boy," I said. "I've seen you work out. If you know all about hard work nobody'd ever guess from watching you."

"About one-tenth as hard as you should."

He frowned at me. "You're kidding."

"I'm not. You work about one-tenth as hard as you should for decent results."

"Sure you do, Sam. As hard as most unsuccessful people."

"It's not just you, Sam," I said. "Everybody's like that. Not on kid in a hundred works anywhere near hard enough."

He gave me a skeptical look.

"For a herculean build?"

"You really want to know?"

"Okay, Sam," I said. "I'll tell you how hard you gotta work. But I don't think you'll like it." I got up and opened the window.

"I better explain one thing," I said. "When I say hard work, I don't mean dragging along for hours at a time doing hundreds of exercises. I mean doing an ordinary program, but working hard on each exercise."

Hard work is the most important single factor for bodybuilding success. You'll improve without a lot of other things, but you won't get far without hard work.

Hard work is much more important than the program you choose. The lousiest exercise will produce results if you work hard enough on it. Hard, hard work on any program is infinitely superior to loafing through the finest program ever devised.

Remember . . . hard work is more important than your choice of exercises! Too many kids make the same mistake. They shop around for course after course. They're looking for some magic routine that'll turn them into Mr. Universe. But there's no such thing. It's the effort you put into each exercise that counts. Without maximum effort no routine will build you up very much. You've got to work hard, give it everything you've got and then some, or else forget it. You won't gain with a halfhearted effort.

Let me give you an example:

When I started training, heavy breathing squats were the thing. I squatted for six months and never gained an ounce. then I learned to do it properly. The only change I made was increasing my effort about fifty fold. I learned how to really work.

I weighed around 141 when I started working hard. I gained to a bodyweight of 305. The only difference was hard work. Really hard!

Load your squat bar to what you normally use for 10 reps. Then do 20 reps with it! I'm not kidding. The 10th rep feels like the end. But you take three huge gasping breaths, block everything else out of your mind, and do the 11th rep. And you make it. You always do.

You make each repetition a world of its own. You think of nothing else but the rep you're doing. And you force it. You do the 12th. And the 13th. And the 14th. By the 15th your mind is working harder than your body.

You feel like you're isolated from the rest of the world on the last five. Nothing matters except one more rep. And then one more. And one more. Your body has fantastic power if you make your mind work hard enough. If your mind goes then the set is finished. Keep the mental wall up and finish the set.

When you finish, you should literally have trouble walking to a bench to do your pullovers. Your legs should be buckling and trying to collapse on you. If you can walk normally, then you're loafing.

That's what I mean by hard work.

Top men work that hard. They man not do 20-rep squats anymore, but they work hard on whatever they're doing. They make each rep a driving, burning necessity. That's why they're better build and stronger than you are.

I was spotting for one of the big Mr. America winners one time. He was doing bench presses. His lat two reps were absolute agony. He closed his eyes, gritted his teeth, and strained on the 7th rep for what seemed like eternity. The weight inched up and he locked out with his arms trembling. I grabbed it.

He came off the bench gasping for air and madder than heck. "What are you doing?" he snarled.

I blinked and stepped back. "Nothing," I said. "Just taking the weight like we agreed."

"You sure as heck looked finished."

"Well, I wasn't. I coulda done another rep."

That's the way you've got to train. Everything else is just a warmup for that last rep. Work to your limit and then do one more.

A friend of mine built up from a bedridden case of rheumatic fever to a build like Hercules. He did it on a few exercises and hard, hard work. You never saw such effort. He said one time he wished he could learn to hold the bar with one hand while he was squatting and free the other one.

"I could use it to hold my eyeballs in," he said.

There was a good lifter some years ago named Louis Abele. Abele built himself into world championship caliber. He had an average framework and nothing special going for him. He made it on hard work. 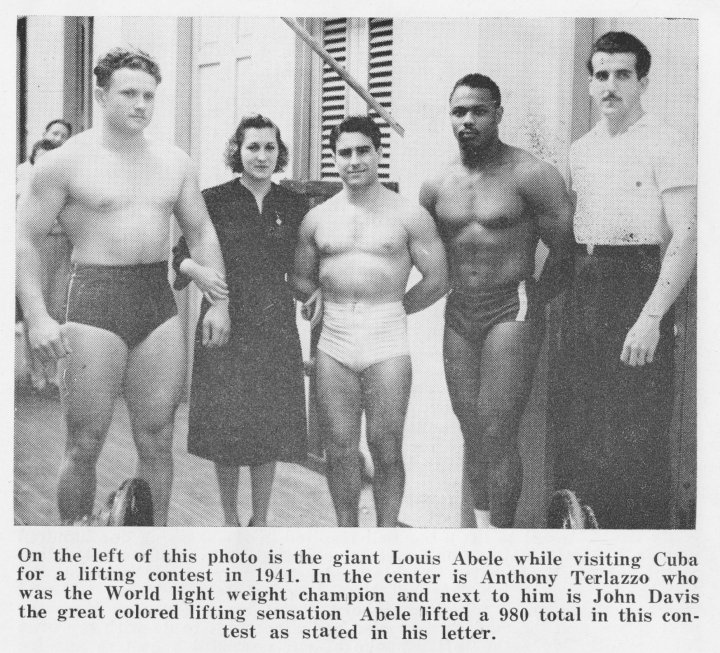 Remember . . . no program will work unless you do.