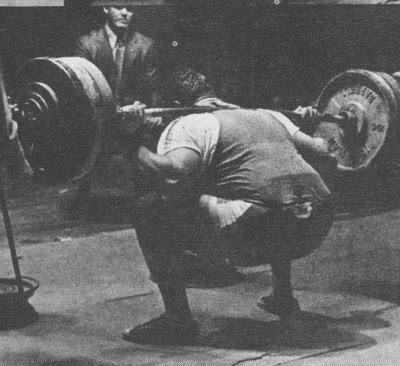 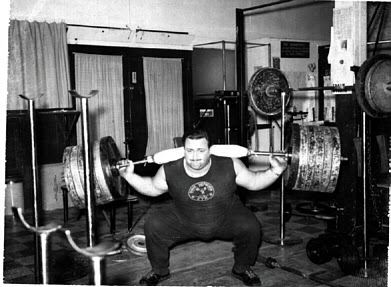 All Trax Lead To Jax: A Modern Squatting Parable
by Hugh Cassidy and Marty Gallagher (1985)

Jimmy's problem was typical, lack of progress. In fact Jimmy was in many ways, "typical" personified. At age 19, 5/9" tall and 194 pounds, Jimmy had been training with weights for three years and powerlifting competitively for one year. The previous Saturday, he had competed locally and was depressed at his showing, particularly in his squat.

You see, Jimmy had religiously followed a 12 week squat improvement routine outlined in PLUSA. The author, a many-time world champion, had laid out every exercise, set and rep to be used. The champion stated that if the goals in each cycle were met, the trainee, who was assumed to have a 500 pound squat initially, would have a 540 squat at the end of the 12 weeks. Since Jimmy had done 505 in his previous meet this routine seemed just what the doctor ordered. Our friend Jimmy, however, was squashed by 540 and had to be content with a 500 pound second attempt.

In desperation, Jimmy sought out Jack, an ex-national and world champ, and coincidentally the gym owner Jack had seen it all in his thirty years of lifting. His is the disposition of a rhino with hemorrhoids and he doesn't cotton much to current trends in powerlifting. Jax's Gym was spacious with big beefy equipment, mostly homemade, a serious gym for serious training.

One Monday morning, Jack looked up from his SOLDIER of FORTUNE magazine to see Jimmy standing before him.

"I need some help, Chief. I tried this squat program," said Jimmy, flashing the magazine, "and I got nowhere. What's wrong with me?"

"Nothing's wrong with you, kid," Jack said after a quick study of the routine. "No wonder you only got 500 pounds, you were lucky to get that!"

"But, I hit every target poundage. I deserved 540!" protested Jimmy.

"Look, you wanna argue or do you want advice," bellowed Jack, more than a little irritated.

"Okay, shut up and listen." Jack pointed to a chair, pulled out pencil and paper and began scribbling.

"This routine is downright typical of what you see in the magazines these days. Most of these articles are well meaning, but disastrous for the young trainee."

"Several reasons. First, the work loads suggested for the first eight weeks are just too light. You might have started with a 500 pound squat when you started this routine, but after eight weeks on this program you've only reached 400 pounds, and that's with suit and wraps. You don't have a 500 pound squat anymore, you've gone backwards."

"what the champs in the powerlifting magazines are trying to push is the cycling principle, which is sound, but their error lies in wasting the first two-thirds of the program," Jack continued. He scanned the article a little further. "Kid, what happened when you took that 540 our of the rack on your third attempt?" Jack had the look of a hardened States Attorney grilling a guilty defendant.

"Well, it felt a little heavy and I had a hard time setting up." Jimmy was being modest. He had staggered around so bad the head judge had leapt over his chair and it appeared as though Jimmy would squat this one from the audience.

"I'm not surprised," grunted Jack. "The heaviest weight you handled the whole cycle was 460 for 3 sets of 3 reps. I reckon that 540 about cut you in half."

"Holy Jesus, this gets worse." Jack was now reading the routine intently. "You only squat once a week on this thing," he muttered. "A youngster needs to squat twice a week. That's twice a week heavy, not this heavy/light jazz! Young guys have recuperative powers far beyond that of the older lifter. A beginning or intermediate lifter needs to strengthen and grease those neuro-motor pathways twice a week."

Well, this was all too much for our young friend. Jimmy's eyes bugged out and he staggered backward like he'd been shot.

"My God," he sputtered, "twice a week? Squat heavy? I'll be overtrained!"

"If you weren't paid up on your gym dues for the next three months, I'd throw your butt outta here," Jack bellowed. "I'm so sick of this overtraining crap! It's such a cop out. It appeals to our laziest instincts. It says less is better and suggests there really is a substitute for hard work. Kid, when you're squatting 800 pounds, then we'll talk about overtraining. Work load capacity can be systematically increased," Jack said. "You can improve the body's ability to work heavier, longer and more often. INTENSITY, DURATION and FREQUENCY is what we're talkin' in this gym."

Jimmy was in stunned silence so Jack continued. "Remember when you first started training? Recall the agony and the soreness you experienced after those first few sessions? Remember how those three sets of 10 kicked your butt? You didn't reduce your workload because you were overtraining, did you? No! You gritted your teeth and your body adapted to the stress and moved no to longer and heavier and even more frequent sessions. Right?"

"Right." Jimmy was beginning to feel like a convert.

Jack was really getting worked up now, words flowing fast and loud. "These guys who squat once a week are missing the boat. By squatting twice a week you double the amount of potential progress. Don't be swayed by these local lifters. Most of these fellows are working up to a single, using suits and wraps, one time a week, and then they bag it. It's amazing! They say any more than that and they 'feel' overtrained. And yet most of them are taking enough drugs to supply the entire Bulgarian Olympic team. Hell, drugs hasten recuperation. You'd think they'd be squatting every day, not cutting back to once a week. I think it's laziness masquerading under the banner of overtraining."

Jack was on a roll now, his face red, finger jabbing the air two inches from Jimmy's nose, his voice rising and falling like some demented T.V. minister in the throes of a spiritual epileptic seizure. "Kid, how bad do you want it?"

"I want it bad, Chief," hollered Jimmy, out of his seat now.

"I don't think you've got the guts!" Jack thundered in his best drill sergeant imitation.

Jack noticed several passersby had stopped and were staring at the commotion. "Write this down. Now we're also gonna use a 12 week squatting cycle on Wednesdays and Saturdays. For the first four weeks, work up to a heavy set of five. For a 500 pound squatter, we might go 145x15, 235x10, 325x7, 400x5. No suit, no wraps."

"Not so quick, we're not finished yet. Now comes the back-off sets. They're the real meat and potatoes of this routine. Back-off sets will build strength, increase your workload capacity and give you a set of legs like Jerry Jones."

"Okay, after you work up to your heavy five rep set, reduce the weight to 275 or so an do a set of 10 reps. Take a five minute rest and load the bar to 300 and do a set of 10 reps. Rest about five more minutes and load the bar to 320 and do your final set of 10 reps. All three back-off sets must be done within 15 minutes. That's the cardinal rule. We're building reserve power here and increasing the body's workload capacity. No suit or wraps for the first four weeks. Get a couple of good spotters in case you collapse on your last set. Now force the breathing and don't be afraid to chug in several big breaths between reps."

Jimmy was scribbling furiously. "Jeez, 3 heavy sets of 10 in 15 minutes after a hard set of five, that ain't fair."

"Life ain't fair, kid, and don't worry, the body will tune in to it, adapt and grow. Do this twice a week and when you hit all your target poundages, move your five rep set and your ten rep sets up 10 pounds. Do this for four weeks, eight squat sessions, and we're ready for the real work."

"What have I been doing up to now?" Jimmy was incredulous.

Jack ignored him and continued. "For the second four weeks you'll work up to a triple using your knee wraps, and pile on the plates. When I say a triple, I mean a TRIPLE! Don't miss the third rep. On your back-off sets you're now to do three sets of six reps but you must complete them IN 10 MINUTES, not fifteen, no suit or wraps on the back-off sets. And please, no face slapping, or yelling, or three stooges two-by-four schtick! It just depletes your adrenaline supply. You'll need all you can muster up on the platform. Any questions?"

Jimmy started to say something, caught the expression on Jack's face and thought better of it.

Jack began again. "Okay, the final four weeks we'll work you up to a big double; suit, wraps, belt, the whole works. On the back-offs, do three sets of three within 10 minutes with no suit or wraps on these. Use this format for six sessions. Take your last heavy workout the Saturday before the meet. On the Tuesday before, come in and do maybe three or four sets of 10 reps just to pump some blood to the area. That's essentially it. You follow this routine and after 12 weeks you'll be a squatting machine."

"Sounds a little complicated, but I'm in for the duration," Jimmy said resolutely.

"One more thing," added Jack, "have your training partner call your depth every set, every rep, one inch below parallel. Build good platform habits from the beginning."

Well, to finish out our story, Jimmy started the next day and stuck it out the whole 12 weeks. The soreness after the first three sessions caused our boy to walk a little funny and coming down a flight of stairs was like walking on eggs, but determination this boy had! True grit!

He grew in body and confidence and by the end of the first four week cycle he was repping for five his previous best double. The second four weeks brought a triple with 535 with knee wraps only. At the state championships he went three for three ending with a 605, well below parallel!

His appetite had increased as his metabolism was like a blast furnace. At the state meet he weighed 217 pounds. He'd put two inches on this thighs and his whole physique had been transformed. The local lifters were skeptical. They felt he must have stumbled across the perfect drug combination. Jimmy just smiled; he wasn't talking.


After the meet, Jimmy approached Jack before he'd even picked up his trophy. "The program's terrific," Jimmy whispered conspiratorially, "but say, do you have a minute . . . my bench press is on the fritz and I wondered if . . ."

"Not now, kid." Jack was abrupt as usual. He was preoccupied with a jiggly young divorcee who was training for the 'Miss D.C.' contest. As Jack and his escort stumbled out, Jimmy overheard him mumble, "These kids are all so one dimensional, all they ever want to do is talk weights, weights, weights."