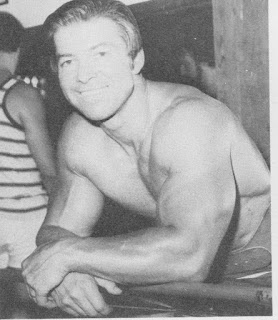 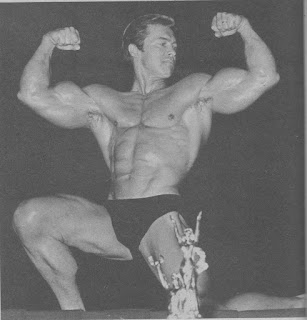 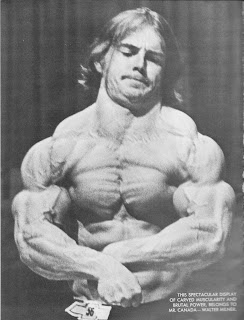 RACING THE PUMP:
How to Build Upper Pecs
by Larry Scott (1976)

Bodybuilders are often disappointed when they find that some bodyparts do not respond  as well as others. It's easy to get excited about the routine a champion might use. You get the impression that if he can build his body to a certain level, you, too, can do it.

I watched Don Howorth build incredible deltoids with little effort. Arnold pumps his enormous biceps with simple movements that leave the mimics baffled. It's sad to relate that certain fellows are born that way. They have bodyparts that will respond to anything.

However, fortunately, that's not the entire secret to bodybuilding. There are a lot of naturals wandering around who don't have it because they don't know how to put it all together. You see them all the time. They have wonderful proportions, but they can't seem to put on the kind of muscle that whips bodybuilding fans into a frenzy.

It's darn seldom that one guy is going to have a body that responds ultimately to every exercise he does. A lot of times they mistake size for peak development. Too often they depend on size alone rather than shape and detail. That's where Mister Mediocre can slip in and steal the show - if he knows how to train.

One of the body areas that eludes the best of them is the upper pectoral region of the chest. Its presence, all too often, is marked by a conspicuous hollow directly under the clavicle, especially when the arms are raised overhead in poses. The upper portion of the pec minor pectoral muscle fills in the chest directly above the heavy lower pecs up to, and covering, the collarbone. Emphasis on this neglected region removes the bottom-heavy look of the chest and gives it the balanced look of the superbly trained bodybuilder. Many physique men have huge chests, and many have cuts and striations, but few have the ideal size and balance. That takes effort and thought.

I happened to be the type that was forced to think and work. It makes me envious when I think of Big John Johnson here in Salt Lake City, who stands 6'2" with the widest shoulders I've ever seen in bodybuilding. They are built of solid, massive muscle tissue. Relaxed, his delts look like wing tanks on a plane.

I'm sorry I can't relate this as a success story, because John, much to my exasperation, can do a few silly seated presses, a few lateral raises, and his delts take off like a forest fire. Don't get the idea that I really care. I just couldn't resist giving you another example of a natural who can get big easy while I have to work my tail off.

Fortunately, God tells us there must be opposition in all things. That has been my advantage because the extra work that I've had to do, and the extra ingenuity, has helped teach me more about the techniques of training.

Big John's a nice guy. Besides, I have become quite accustomed to working harder than my contemporaries to achieve the same gain. Did you get that - I said the same gain.

This is especially true of my chest, probably one of my most stubborn bodyparts. My chest never responded as fast as my arms or legs. Because of this pectoral reluctance to respond to normal training routines, I have been forced to listen more intently to the feedback my body gave me during my chest routines.

You might have asked yourself at this point, "Why should I be concerned with all these small muscle group areas?" If you still a relatively new bodybuilder, these "balance zones" may be quite important to you. I realize you want more honest to goodness muscle SIZE right now, and overall physique balance has not yet become important to you. If you are thinking ahead, you will take my advice. Think of top bodybuilders like Frank Zane, who stands on the pinnacle of achievement because he selected his movements to sculpture a beautiful physique. It would be worthwhile to have an eye for the aesthetic as well as for the massive image of the physique ideal. You will go farther if you aspire to both objectives, and not to either one alone.

I mentioned the difficulty of building upper pecs, and each of us need not be reminded of the many fruitless hours spent trying to get some permanent size in this elusive region. The question is how to do it.

Perhaps "how" is the wrong word. The question is not how, but when, When!!!

Many small isolated groups of muscle will not recuperate fast enough to sustain a pump long enough to get any lactic acid built up in the muscle. The upper pec is one of these areas. You've got to borrow from the lower and middle sections of the pectoralis major.

First of all, you've got to engorge the big middle and lower pecs with blood. Here we can use flushing methods. You increase the pace of the sets with less rest in between. If you don't hasten the pace, the blood will withdraw from one set to the next. I have felt this happen many times. When I took too much rest between sets, the blood rapidly dissipated, and this led me to erroneously believe that my muscle had had enough, that continuation would amount to overwork.

The muscle was not being over-trained. On the contrary, it was under-trained, and the process fooled me completely.

Here is the system I use. Keep in  mind quality training methods. Rest between sets is brought to a minimum.

To set the stage for the upper pec workout, I use the Wide Grip Bench Press to work the middle pectoral area, and the V-Bar Parallel Dips to thoroughly flush the lower and outer pecs with blood. 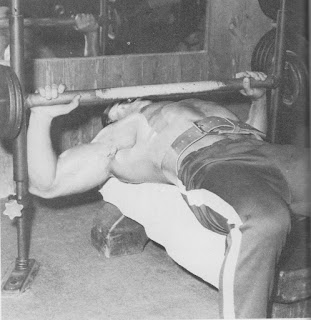 I perform 3 sets of Wide Grip Bench Presses, 12, 10, and 8 reps, increasing the weight each set, and bringing the bar to a point high on the chest, just below the collarbones, elbows flared out. I superset them with Parallel Bar Dips, using a V-formed set of bars that allows me to really blast the outside of the pecs and make them appear wider. Regular Parallel Bar Dips can be substituted if you don't have the V-Bar type. Or, if you have movable dip bars they can be placed rather far apart. Perform as many reps as you can on the dips, and go for a massive pump.

Now that the pectorals are fully pumped from the first two exercises, I immediately move to the incline bench and start my Tri-Set upper pec routine before the pump can diminish.

This movement is excellent for adding size to the upper pecs where they tie in to the deltoids. Dumbbells allow you to lower the weight further than the barbell and help add an extra cleft of muscle in this region. Use a light weight on the first set on all these upper pec exercises. Start with the dumbbells overhead while lying on an incline bench. Lower the bells slowly with the elbows flared and well back to fully stretch the upper pectoral attachments, then press back to the starting position until the arms are fully locked out. Inhale deeply as the weight is lowered, exhale as you push the weight back up. Repeat for 10 reps. Without pausing go immediately to . . .

When using heavy weights on this exercise, it builds slabs of muscle across the upper chest that cover the collarbones for a high, deep chest. If you don't have a special rack on your incline bench, get two training buddies to hand you the weight. With a wide grip, start with the bar at arms' length over the chest. Lower the bar in a controlled manner, again to a point high on the chest, just below the collarbones; press the weight upwards and back at the same time until the arms are locked out fully with the bar over the eyes. Repeat for 10 repetitions, inhaling deeply as the weight is lowered, and exhaling as you press it back up. Go right to the next exercise . . .

This exercise adds size, shape, and definition to the upper pecs and is one of my favorite chest builders. Start with the dumbbells held above the chest, arms slightly bent to relieve the strain on the elbows. Inhale deeply as the bells are lowered out to the sides and towards the rear slightly to get a full stretching action of the outer and upper pectoral area. Return to the starting position and tense the pecs forcibly as the hands come together, exhaling as you do so. Repeat for 10 reps.

Pre-set all the equipment before you even start your chest routine. Time is of the essence here. You must not lose a moment. If you find your upper pecs are stubborn and seem to refuse to respond to anything, please give this a try.